The Electric Reliability Council of Texas (ERCOT) that manages Texas’s electrical grid, the Texas Interconnection, which supplies power to more than 25 million Texas customers and represents 90% of the state’s electric load, held talks with Goldman Sach and other financial institutions about financing options bailouts to address the $3.1 billion shortfalls in electricity payments as some energy retailers haven’t paid, defaulted, or have filed for bankruptcy, according to WSJ sources.

Sources said ERCOT is in talks with investment bankers from Goldman Sachs about opening a potential credit facility that would cover the $3.1 billion in shortfalls energy retailers still owe when they bought power last month at exorbitantly high prices due to an Arctic blast and severe winter storms that nearly collapsed the state’s power grid. 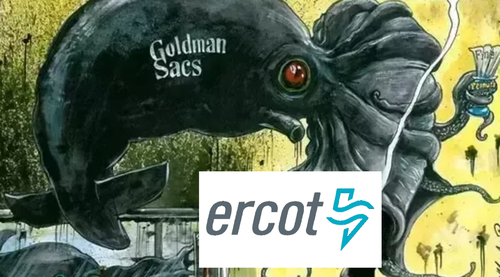 On Feb. 24, Kenan Ogelman, ERCOT’s vice-president of commercial operations, warned about a credit crisis developing among market participants who buy power from state’s power grid. ERCOT’s acts as a payment clearinghouse for electricity buyers and sellers, and some of the bills it issued last month have yet to be paid.

With a credit crisis spreading, and already, Brazos Electric Power Cooperative, the largest generation and transmission co-op in the Lone Star State, filed for bankruptcy on Mar. 1 after it could not pay a $1.8 billion bill from ERCOT.

A shortlist of who owes what was published last week – still billions of dollars in unpaid bills are outstanding.

In the last week, the shortfall has increased from $2.217 billion to $3.1 billion as of Thursday. Some participants, like San Antonio’s public power utility CPS Energy, are objecting to paying ERCOT, filed a lawsuit Friday attempting to block payments to the grid operator.

CPS incurred $1.1 billion in charges after it bought electricity and natural gas last month. CPS said ERCOT’s “extreme confiscatory prices have caused many providers on the Texas power grid to become insolvent. At the moment, there are 22 market participants at risk of going under.

“We are fighting to protect our customers from the financial impacts of the systemic failure of the Ercot market and the outrageous and unlawful costs associated with that failure,” CPS Energy President and CEO Paula Gold-Williams said.

The sources said Goldman and other large institutions have spoken about arranging a credit facility to address the shortfalls and prevent further destabilization among participants, but nothing has been set in stone.

It’s only a matter of time before Goldman, the great vampire squid that it is, wraps its tentacles deep within Texas’ power grid.

COVID, a disease in name only