Is It Time For Jay Powell’s “Taper Tantrum”?

Authored by Andreas Steno Larsen and Martin Enlund via Nordea,

It could be time for Jay Powells “taper tantrum” as SLR-stakes are high ahead of the FOMC meeting on Wednesday. The political pressure is building and the SLR-relief may not be prolonged. We enter the meeting leaning short in EUR/USD and bonds.

We have a big central bank week ahead of us, with scheduled monetary policy decisions from the Fed, Norges Bank, BoE and BoJ, and it could prove to be one of the most important weeks in the life of Jay Powell.

The Fed meeting will be held against a backdrop of a manufacturing business cycle that still gains momentum, and with a service sector that is starring directly into a bright reopening outlook over the coming 3-5 weeks. It probably matters less (to the Fed) that China is starting to roll over with likely side-effects for commodity markets and global manufacturing during H2-2021. 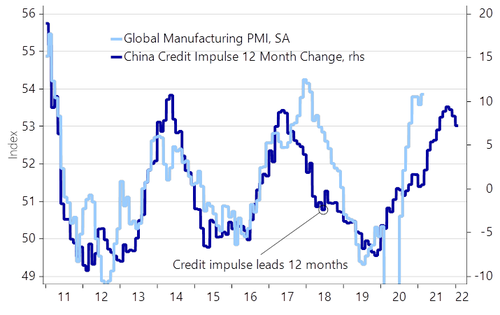 The inflationary consensus is already strong and judging from Google trends, it may even have reached levels never seen since we entered a new millennium. Americans google “inflation” to an extent that is completely out of level with anything seen before, which could be a signal that consumer prices are actually starting to pick up markedly. Average Joe feels it immediately when goods like food and gasoline starts rising. 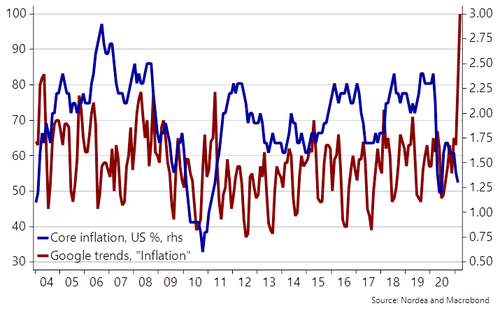 The Fed will also have to decide on the potential extension of the SLR relief (exemption on Treasuries in leverage ratios) as it is not as if we haven’t seen the side-effects of the lack of clarity already. A repo squeeze due to marked shorting of Treasuries, the biggest 1 week drop in Primary Dealer positions in Treasuries and substantially rising Treasury yields are all clues that SLR matters BIG time. Many Democrats oppose a prolongation of the SLR relief, why it may prove politically opportune for the Fed NOT to prolong it and come up with a technical solution that politicians won’t be able understand instead.

J-Poww will need to solve the rhetorical Sisyphean task of repeating that the Fed will be looking into the SLR issue, but not commit to the solution – a job that he is clearly ill-equipped of doing. We stay short EUR/USD and T-bonds in to the meeting. 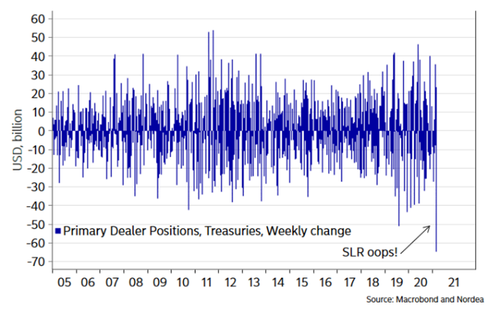 Should the Fed mess up its communication around the SLR-relief, then we would argue that as much as $650bn USD of pent-up Treasury bond selling is on the cards from commercial banks as banks will be flooded with new USD reserves due to the TGA drawdown already later in March again. It will be Jay Powells biggest test so far and we don’t count on him passing it. 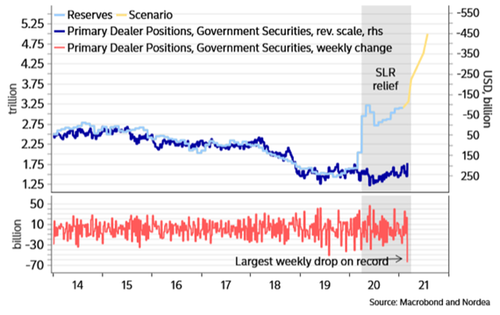 Which options are on the table should the Fed decide to mitigate a non-prolongation of the SLR-relief? First, the Fed may opt to Twist the asset purchases towards a WAM of 10 to prevent a disorderly Fixed Income environment. Should the Fed decide to move towards a WAM of 10yrs in the SOMA portfolio again, it could work to temporarily dampen the steepening pressure in the USD curve, but it may not work as well as in 2011-2012 as the business cycle is currently gaining momentum, which usually leads to higher bond yields, not lower.

EUR/USD also continued to drop during the first Twist operation (mostly due to the Euro debt crisis), and from a relative growth and inflation perspective, an operation Twist would likely prove to be USD friendly.

Chart 5. EUR/USD dropped during the first Twist operation and would likely do so during a Twist 3.0 as well 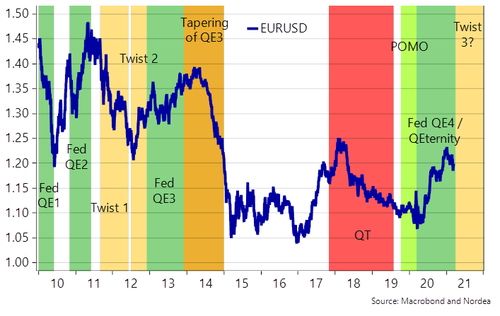 Second, the Fed could opt to “sterilize” parts of the USD reserves that will hit commercial bank balance sheets due to the TGA drawdown. This is a trickier road to manoeuvre since it carries a high risk of being interpreted as a sort of tightening regime, which may carry negative spill-overs to e.g. risk assets. Good luck J-Poww!

His colleagues on the other side of the pond in Frankfurt also still struggle to understand similar Fixed Income dynamics around QE decisions. The ECB doesn’t get that i) lowering a 2023 inflation forecast, makes it easier for markets to bet on upside risks to the current ECB policy, ii) significantly increasing PEPP purchases during Q2 will rather lead to a continued reflationary pressure in inflation swaps and accordingly also higher long bond yields, which could in turn lead the ECB to buy even more with a negative EURUSD readthrough (Week ahead: Why long bond yields rise during QE).

Chart 6. The more the ECB buys, the bigger the chance of a steeper curve 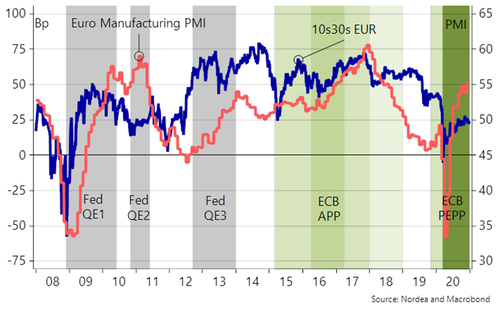 Even the Japanese yield curve has shown signs of life, which makes the BoJ policy review this week extraordinarily interesting. The BoJ balance sheet policy has proven to be pro-cyclical as the YCC-target forces the BoJ to buy more bonds when the global outlook is repriced in a positive direction as currently, which is not without resemblance to the most recent ECB PEPP decision making. BoJ could opt to move towards accepting a wider range of volatility in the 10yr point as a consequence, and we would argue that such a message would carry an initial bond bearish read-through.

Chart 7. When the global outlook is repriced positively, BoJ has to buy more bonds in the procyclical YCC setup 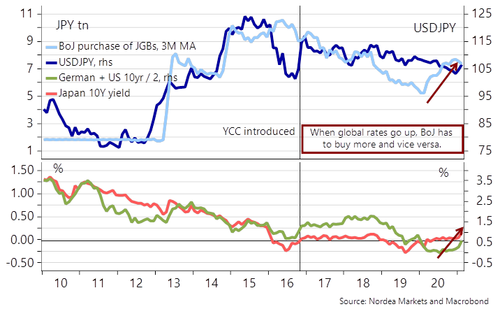 Else, we expect Bank of England to reflect the vaccine roll-out success via a more upbeat tone that fully commits to discarding NIRP as a possibility (for the time being), and also do note that the US is now clearly the Western economy with the best vaccination momentum. Johnson and Johnson doses are already being put to use, while the EU-members don’t expect to see any doses from JnJ until late in April. 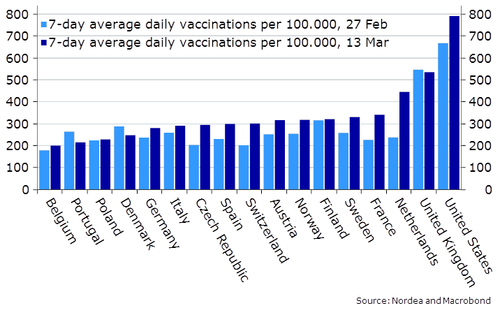 We stay short EUR/USD and EUR/GBP (preferring short cable in the relative GBP vs. USD game).

If you want to receive a copy of Nordea’s FX weekly directly in your inbox, you can sign up via this link.

Over A Third Of California Bar Exams Flagged For Possible Cheating