“With vaccines slowly rolling out, we expect investors to start returning to the oil sector and for prices to continue firming.”

And judging by the surge in energy stocks and Brent crude topping $50 for the first time since March, it would appear investors are returning en masse in the hope that things will “return to normal” sooner rather than later. 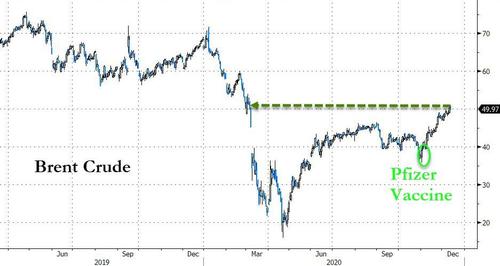 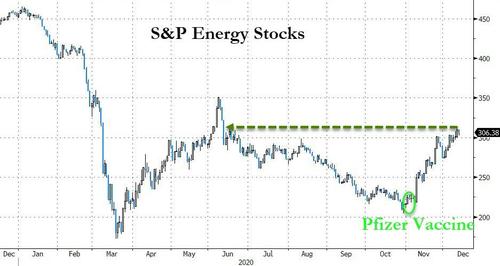 As Bloomberg notes, while the COVID-19 pandemic is worse than ever in the U.S., demand in Europe is bouncing back as a second wave of lockdowns eases and Asia continues to pull in huge volumes of crude.

In some corners of the world, the recovery in demand is almost complete.

India’s largest refiner said last week its plants are processing at full capacity and it’s expecting a v-shaped rebound in fuel use.

Consumption of gasoline is also at or near pre-Covid levels in China and Japan, the world’s second and fourth biggest oil consumers.

European motorists are hitting the roads again as governments relax national lockdowns in countries including the U.K., Spain, and France, according to an index of road usage and traffic compiled by Bloomberg News. Road freight is sharply higher as companies rebuild inventories and the Christmas shopping season gets in full swing.

All of this as US continues to lag. 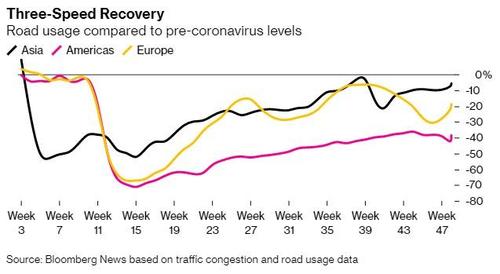 The Bear Traps Report (with Larry McDonald) agrees, positioning bullish for 2021, expecting to see $80 Crude a year from now…

We think the oil industry is at a very interesting crossroads. While the headlines are obvious, ESG, green initiatives and capital broadly being reallocated out of the energy space, there are some positive tailwinds that are starting to enter the equation. At current multiples and sentiment, we think some of these more positive forces are worth factoring in.

The global economy, with plenty of speed bumps to come, is in the early phase of recovering from a once in a generation shock. Typically, in economics, a shock is either demand or supply-based, covid was really both. For oil, the grounding of flights, domestic lockdowns, and heightened levels of general uncertainty, have meant oil and oil names have traded very poorly this year. The thing that is worth noting in the context of this perfect storm is, who are the survivors, because the companies that are able to survive this shock will be in a good place from an operating leverage perspective, i.e. reduced competition, and will be the most able to benefit from the changing tides of global risk.

Emerging market countries are benefiting from the weaker U.S. dollar and stronger CNY in China. 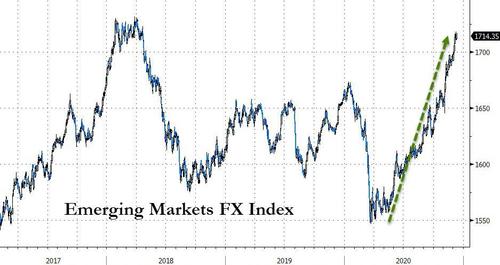 One of the things that are becoming clear in this early phase of the global economic recovery is, China and the US’ approach to stimulus has actually been quite complimentary. China has been focused on the supply and production side while the U.S. has been focused on the demand, fixing the private sector balance sheet side. On the one hand, this has led to age-old problems. Case in point, the external accountbalance with the trade deficit between the U.S. and China going back to all-time wide levels. However, this combination of policy support has largely been a positive for the global economy, especially emerging markets. The positive multiplier impact from a stronger yuan in china is significant. This is oil bullish.

How Does this Work?

China gets the factories open and supports the supply side, the U.S. gets households money which they spend on goods instead of services. Given covid restrictions, this data has been impressive. This duality effectively sends money to China, strengthens the RMB, and allows China to import more from the rest of the world. This downstream of demand is critical to getting the global trading back to its pre-covid levels again. It is also why this transition of fiscal policy and transfer payments is so important for the global economy right now.

If the famous fiscal handoff from monetary policy is here, oil and other industrial commodities will be prime beneficiaries. This is where there could be a bit of irony in the wall street narratives. One of the main consensus views takes place on the street is that oil names will struggle with a blue wave, given green focus, regulations, fracking, etc. However, the same people are saying that a blue wave will be positive for risk assets and growth has given it is the most likely medium for expansive fiscal spending. As we have seen, when the U.S. does fiscal and household consumption is strengthened, it has a positive spillover on global growth and global trade. When growth and trade are improving, oil and oil-related names typically do well. We think this is especially true as the supply response from OPEC and U.S. shale will be much more muted if growth and demand-side lead to a re-rating higher in oil prices in 2021. We believe the famous fiscal handoff is here and a large fiscal response only reinforces that dynamic which should end up being positive for oil and oil-related names in 2021.

We believe the oil market has been leapfrogging many factors in the short term including the current covid concerns and the short term demand issues that will develop from economic shutdowns along with Iran production coming back.

Overlooking these issues is fine if they don’t develop momentum.

However, they are developing momentum so we do not think that one should remain naked in this respect. We would take advantage of lower volatility today to layer in some risk offsets due to both covid and the knee-jerk reaction the market might have to a democratic government pursuing a more positive relationship with Iran. This will likely be a short term concern so make your risk offsets short duration.

If momentum picks up that Iran will be allowed to reinstate as a full producer of oil to the market, we think that both the pace in which the production is added as well as the absolute amount of production added does not overshadow the daunting supply crunch that is only going to become more apparent to the market as the ’21 develops.

In fact, it would be naive to think that OPEC+ was not considering this issue in its decision to increase production by 500,000 bd in the new year, which would indicate that there is a supply crunch already happening and OPEC+ is trying to avoid the price of oil moving too high too quickly.

Energy equities are acting very well in this current market and it is worth noting that oil prices may come under pressure and equites could act better due to the value/growth transition that seems to have legs of late.

We think that the Venezuela concern is not of merit as the scope of capital required to reinvigorate the production will make it’s an entrance back into the global market a very slow one.

Offsetting the COVID and Iran (new supply) headwinds are the following tailwinds: 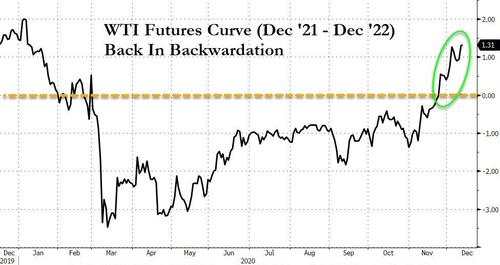 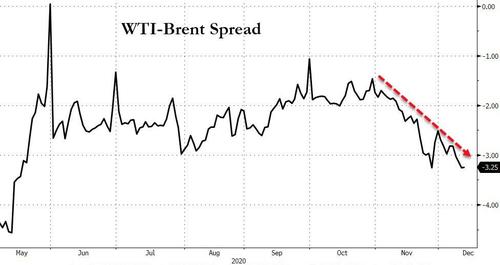 And so it is a bet that these physical market indicators worsen because of covid – right now they are indicating a tight market.

However, not everyone is so positive of medium-term recovery over short-term hiccups.

“While we have to deal with the immediate dark Covid winter.“

As Bloomberg warns, there are reasons to think $50 could be oil’s ceiling for now. The price could tempt producers from Baghdad to Oklahoma to increase production. There are already tensions within OPEC+, with some members chafing at the cartel’s self-imposed supply limits.

Additionally, the backwardation highlighted above, that’s attracting speculators, could also draw real barrels into the market, because the price structure isn’t profitable for any traders still storing physical crude. And relentless Asian buying may pause at some point, especially with Lunar New Year celebrations starting in early February. Higher-cost crude will start to dampen the profitability of refiners in the region.

“There’s been a distinct shift in the financial oil market,” said Michael Tran, an analyst at RBC Capital Markets. 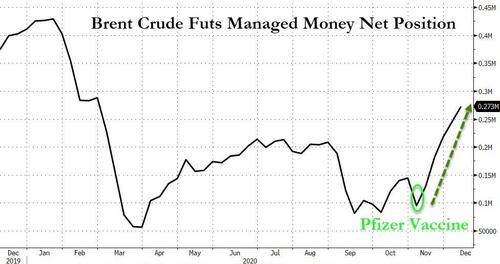 Speculators are buying futures and holding onto them, scared that they’ll miss out on a further rally, he said.

So is oil really the cheapest reflation asset? Or is it caught up in the speculative excess sparked by vaccine ‘return to normal’ fear-of-missing-out exuberance… like everything else?

An Epic Commodities Boom Is Coming

Despite Clouds Or Darkness, New Satellite Can See Into Buildings