Yesterday afternoon, when Gamespot and a handful of the most shorted small cap stocks exploded to never before seen levels, we reported that Melvin Capital had emerged as the first casualty of the Reddit/WallStreetBets forced squeeze/bull raids, when it received an emergency $2.75 rescue loan from its previous investors, Citadel and Point72. The reason why the Gabe Plotkin-founded fund was brought to the verge of margin call liquidation, is that among its $12 billion in AUM (which is now well below $9 billion) the company had reported that it also owned hundreds of millions worth of puts targeting such retail daytrading darlings as GameSpot, Bed Bath and Beyond and GSX. 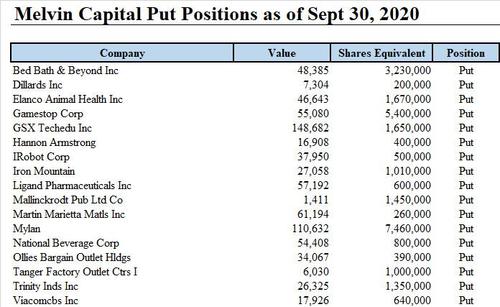 Had Melvin merely held shorts – which it doesn’t have to disclose under current SEC rules – it is unlikely that any of the ongoing fireworks would have ever taken place as the fund would have never attracted the attention of the WallStreetBets crowd which we now know specifically targeted Melvin Capital, and by extension its peers which held concentrated shorts in the same handful of stocks, which incidentally as we reported last Friday, just happened to be the most shorted Russell 3000 stocks, all of which had a short interest to float ratio of 50% or more: a recipe for explosive short squeezes in any market, and certainly in one as illiquid as this one.

In any case, once WallStreetBets figured out that Melvin was shorting not only some of the biggest daytrading darlings but also some of the most shorted names, it wasn’t a stretch to conclude that it would become the target of a violent bull raid and that’s precisely what happened on Friday, when Gamestop stock soared – a move which was catalyzed by Citron’s Andrew Leff capitulating and stating he would no longer discuss his GME short – and again on Monday when the metaphorical dagger to Plotkin’s heart was the spike in GME stock to $159 at which point the fund found itself in a multibillion margin call, and only a bailout by Ken Griffin and Steve Cohen could prevent catastrophe.

We already know all this. What we didn’t know is who would be next, and as we said yesterday, there most certainly will be other casualties.

Well, we now have a candidate for hedge fund #2 to collapse as a result of the ongoing Reddit bull raids.

Presenting Maplelane Capital, a $3.3 billion New York-based hedge fund which was established in 2010 which according to its description “focuses on a short term approach with active participation utilizing options trading.” Maplelane Capital was founded by Leon Shaulov – formerly of the disgraced tech-focused hedge fund Galleon whose boss Raj Rajaratnam was thrown in jail for insider trading on tips from a Goldman director over a decade ago – “with less than $50 million, mostly from his personal savings.”

A quick look at the fund’s Form ADV reveals the following in its “Investment Strategies, Methods of Analysis and Risk of Loss”:

The Adviser seeks attractive returns by utilizing a fundamental approach to equity investing across all market sectors. In addition, while the portfolios will generally be characterized as having a short-term holding period, there may be several positions that are held for a much longer holding period. It is anticipated that the Adviser will use significant amounts of leverage on behalf the Clients. The Adviser actively uses options trades to express views on the market and on individual stocks. The portfolios may have a significant short net exposure to equity markets, although at times, it may be relatively market neutral or have a significant long net exposure to equity markets.

So a fund that uses “options” to “use significant amount of leverage on behalf of clients” and is “significantly short.”

Alarm bells should be going off here… But in any case, we don’t care some much about the fund’s investing style or history –  readers curious about Maplelane’s history can read the following NYT piece. What we do care about is what it owns – or rather, is short – because a quick look at the company’s latest 13F would be more than sufficient to send r/wallstreetbets howling with rage: not only does MapleLane have many of the same shorts – via publicly disclosed puts – that Melvin Capital was almost liquidated over, but it has even more puts! Below is a table of Maplelane’s latest put positions.

These, as above, are the “who’s who” of the most shorted stocks on Wall Street.

In short (no pun intended), all the pain that Melvin Capital is currently going through, may befall Maplelane, if it hasn’t already: our only indication of how the fund is doing YTD is a brief mention in the WSJ saying that the fund is “down for the year.” Worse: with an even deeper book of puts, the r/wallstreetbets community will now have even more stocks to ramp up in expectation of forcing a short squeeze either at Maplelane, or any other hedge fund that shared an idea dinner with Leon Shaulov and decided to piggyback on his shorts.

So what happens then?

Let’s say Maplelane is currently nursing massive P&L losses and it is just a day or so from a terminal margin call, which will force the fund to come up with billions or be liquidated by its prime broker. Unless Maplelane is very close with Citadel, SAC pardon Point72 or another huge and very liquid hedge fund, Shaulov will have no choice but to start dumping its long to fund its margin call.

Not surprisingly, at least one member of r/wallstreetbets figured out that this is precisely what happened back in 2008 when hedge funds that were crushed by the financial crisis, siloed out their most illiquid assets and had no choice but to sell their most liquid, and best performing ones. Hence the correct observation that if the short squeeze at Melvin Capital continues, “Melvin has to liquidate their other positions if they have to cover these shorts.”

Yet for once (it would appear), wallstreetbets is actually behind the market, because a quick look at some of the industry’s favorite longs, shows that they got hammered. SMID-cap hedge fund growth darlings like Roku, Peloton and Square tumbled as much as 6%. Not coincidentally, Bloomberg notes thatGoldman’s Hedge Fund VIP ETF which tracks hedge funds’ most popular stocks, slumped for a fourth straight day, the longest stretch since October, even as the company’s basket of most-shorted names soared 15% during the same period.

“The recent squeeze in heavily shorted stocks has been nothing short of extraordinary,” said Jonathan Krinsky, chief market technician at Bay Crest Partners. “If shorts cause too much pain, there is usually some repercussion on the other side as longs have to be sold to offset losses.”

Why? Because these are among the top long holdings of such hedge funds as Melvin and… Maplelane. In other words, these are the stocks that will be liquidated next if any of a number of hedge funds caught in the massive squeeze has to liquidate their short book. 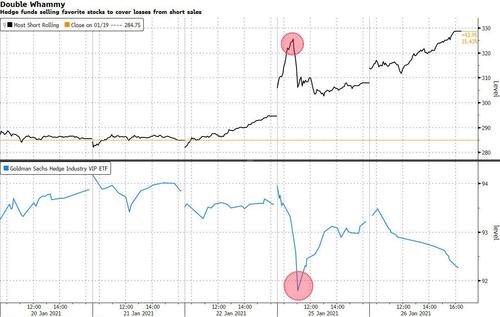 And once the reflexive selling of long to cover shorts begins, it will only escalate in a feedback loop that leads to gross deleveraging of the fund(s), more short covering, more long selling, while at the same time the prices of the most shorted stocks continues to soar.

So will this happen? Well, that’s the $64 trillion question.

Ultimately, nothing that is taking place is the fault of either hedge funds or redditors or robinhooders. No, the only entity at fault here is the Fed which has injected trillions and trillions in hopes of preserving the “market” while instead it merely made a grotesque mockery of what it used to be. As we noted yesterday, “what is remarkable is how many people are “surprised” by what is going on in the “market.” You throw $20 trillion stimulus at it, you nationalize the bond market, you break all links between price and fundamentals… what do you think happens?“

You throw $20 trillion stimulus at it, you nationalize the bond market, you break all links between price and fundamentals…

what do you think happens

One thing we do know will happen, is that sooner or later it will all end in tears, whether with stocks limit up or down. Meanwhile, one may as well take advantage of this terminally broken market and make some money, as one hedge fund after another blows up.

Oh, remember that basket of most shorted Russell 3000 stocks we put together on Friday and urged readers to buy ahead of precisely this kind of market action? Well, it has more than doubled just two days later… 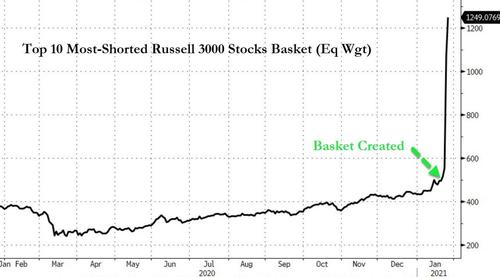 … and if Maplelane or some other hedge fund caught massively short is forced to liquidate in a margin call supernova, it is guaranteed that this basket will only keep rising for the foreseeable future.