Is This The Reason Behind’s Today’s Surreal Market Action

Between the insane rollercoaster action in the most shorted names, which exploded out of the gate only to get hammered the moment the broader market suddenly plunged 60 points in just a few minutes (one wonders which dealer(s) was so short gamma in the most shorted names, they had no choice but to hammer the entire market to break the upward momentum wave and avoid getting crushed), one word describes today’s market action so far: surreal. 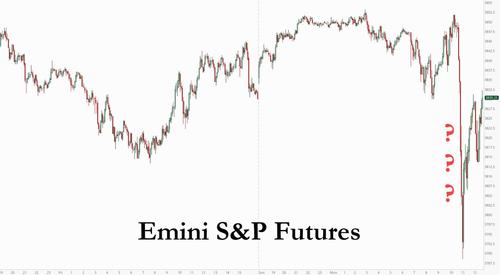 And while it would probably be unwise to try to make any sense of this idiocy, there likely is some fact/fundamental based reason for today’s market action besides merely a reaction to the berserk technicals and market action.

So courtesy of Bear Traps report Larry McDonald, here is one attempt at explaining why stocks are suddenly looking quite a bit gappy, and it has to do with the Fed finally pulling some of the punch bowl away::

Our 21 Lehman Systemic Indicators are screaming higher. The inmates are running the asylum and the probability of the Federal Reserve breaking out their creative “macro prudential” tool box is the highest in years. U.S. central bankers are no longer Trump constrained, the banking system is strong but the equity market has far more in common with Steve Wynn (Vegas) than Warren Buffett (Omaha).

We think the Fed sends a shot over the bow very soon. Our social justice, inequality embarrassed Fed is not happy. The will not taper but they can make serious threats to risk takers. We have an explosion of SPAC / IPO issuance, $850B of margin debt or 75% above 2015 levels, the most shorted equities up 75% vs. 16% for the S&P 500 since October (bulls running over bears), record high call vs. put volume with the little guy leading the charge SELL Mortimer Sell. The risk reward is atrocious from a long perspective in U.S. equities.

Impeachment Threat to Reflation: Moves to the Senate floor next week. Impact; 1 . Pushes out the Fiscal timeline.  2 . Similar to the GOP immediately trying to take down Obamacare, the signature achievement of the previous administration , on day one of the Trump administration. The move was Unwise and Not helpful to the fiscal policy path.

Remember, the tax cuts were sold to us as a certainty in Q1 2017, they didn’t arrive until late Q4 that year. In our view, this speaks to a potential rally in bonds / USD for the next few weeks.

Best case scenario, we have a $1.9T fiscal plan coming in late February early March with the current the bid / offer at $800B to $1.9T. However, any additional variant / mutations Covid risk increase will game the spread in the direction of the offer side if the  mpeachment doesn’t blow up the deal altogether.

Biden has Maybe 2,000 Attendees at Inauguration — and 25,000 Military — Just Like They Do in Lawless Banana Republics