The earth has been warming from way before man used fossil fuels. We’ve been warming since the end of the last Ice Age, it’s normal and it is normal for sea levels to rise with the warming as ice melts.

For the last couple million years or so we’ve had ice ages that have lasted about one hundred thousand years and then warmed a little for about ten thousand years. We are at the long end of one of those ten-thousand year periods. It is now overdue for the next ice age to start. There is nothing we can do to stop it but we may be able to learn to live with it.

We need to harness nuclear and fossil fuels to the best of our ability. We need to learn how to indoor farm.

Perhaps we can reduce the depth, that is keep the ice farther north than in the past ice ages by spreading soot, coal ash over snow in lower latitudes, but we must stop this insane idea of man-made global warming.

Instead of thinking of blocking the sun as Bill Gates proposes we need to learn how to reflect more of it to earth.

Previous to the present age the most wonderful time for mankind and civilization was the Roman Warm period. We still aren’t as warm as then. Temperatures have been falling for the last 8,000 years. 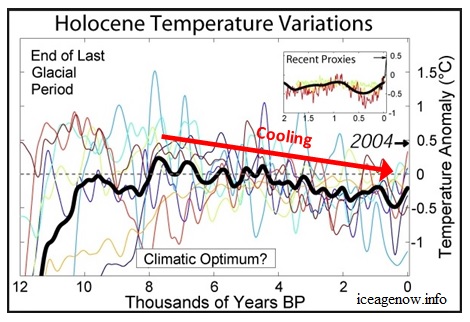 The post It Is Now Overdue for the Next Ice Age To Start appeared first on LewRockwell.

JPMorgan Turns Positive On Crypto, Sees “A Bullish Outlook For Bitcoin Into Year-End”