Janet Yellen Talking Out Of Both Sides Of Her Mouth

During testimony before the Senate Finance Committee, Treasury Secretary-nominee Janet Yellen talked out of both sides of her mouth. She acknowledged that too much debt is problematic, but in the same sentence, insisted we need to “act big” to rescue the economy.

Neither the president-elect, nor I, propose this relief package without an appreciation for the country’s debt burden. But right now, with interest rates at historic lows, the smartest thing we can do is act big.”

This is a prime example of the old adage that you can ignore everything in a sentence that comes before the word “but.” 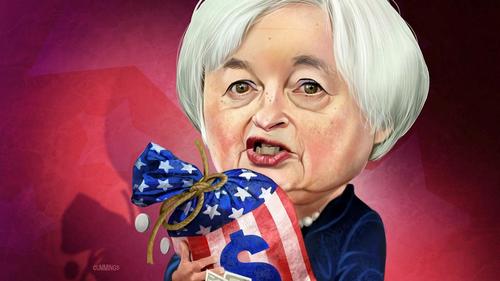 The truth is, Yellen doesn’t care about the debt, and she, nor the newly installed Biden administration, will ever do anything to address it. The strategy is to spend, spend, spend, and continue to kick the debt-can down the road. In fact, this has been the strategy of both Republicans and Democrats for decades.

Pretty much everybody pays lip-service to the national debt, just as Yellen did. But while politicians of every stripe have jawboned about the need for fiscal responsibility and talked vaguely about “dealing with our rising debt”  – someday – the national debt now approaches $28 trillion. This has to make one wonder, at exactly what number does legitimate concern kick in? $30 trillion? $40 trillion?

I’ll give you a hint: there is no number.

The fact of the matter is, there is always a reason to borrow, spend, and push concerns about the debt into some nebulous moment in the future. During the Obama years, it was the financial crisis. Today, it’s the coronavirus pandemic. And tomorrow there will be another reason — perhaps climate change, or maybe our crumbling infrastructure, or perhaps another war.

Any talk of actually addressing the debt problem should be viewed in the same way we look at Lucy holding the football for Charlie Brown. She’s going to pull it away. Every single time.

The reason is simple; the Federal Reserve is artificially keeping them there.

When Uncle Sam borrows money, it puts upward pressure on interest rates. The more bonds the Treasury Department issues, the lower the price falls because market demand can’t keep up with supply. Bond yields inversely correlate with bond prices. As the price of bonds drops, interest rates rise. This is simple economic calculus.

So far, so good. But there is a small hitch in this process. The Fed buys these bonds with money created out of thin air and injects this money into the economy. This is inflation. And it’s precisely why the money supply increased at a record pace in 2020.

Yellen thinks this process can continue because “in a very low interest-rate environment like we’re in, what we’re seeing is that even though the amount of debt relative to the economy has gone up, the interest burden hasn’t.” And she believes “the future is likely to bring low-interest rates for a long time.” She can say this with some level of certainty because she knows that the Fed will have her back and continue to monetize all of the debt.

Ironically, Yellen promised she would “be a voice for fiscal sanity” in the Biden administration. If this is fiscal sanity, I shudder to think what the fiscally insane are saying.

Here’s the problem with this entire scenario: you can’t just keep printing money indefinitely without consequences. We already see the impact in the massive stock market bubble. We’re starting to see signs of inflation in the commodities markets. Oil is back above $50 a barrel. Remember $4 per gallon gas in the mid-2000s? And at some point, you’re going to see the impact in the supermarket. In fact, my wife insists we already are.

Typically, the Fed fights inflation by tightening monetary policy and letting interest rates rise. But how can it do this with Yellen and Biden depending on low rates to finance their massive spending spree?

The answer is obvious. It can’t.

In another example of Yellen double-talk, she insisted “the United States does not seek a weaker currency to gain competitive advantage and we should oppose attempts by other countries to do so.”

There is no exit strategy from this insane monetary policy.

As Peter Schiff explained in a recent podcast, the Fed managed to run this shell game successfully after the 2008 financial crisis because everybody believed all of the quantitative easing was a “temporary emergency measure.” They believed the central bank would unwind it, shrink the balance sheet and normalize interest rates. And as Fed chair, Yellen gave it a shot, and to a greater degree, Jerome Powell after her. But the stock market tanked in the fall of 2018 and the Fed went right back to rate cuts and QE.

Are people going to fall for this con a second time? Not likely, as Schiff explains.

Nobody is going to buy into it again. Nobody is going to bite on this a second time. Everybody knows at this point that QE is infinite. Everybody knows that the Fed is never going to shrink its balance sheet. The balance sheet is going to grow in perpetuity. It’s just that now people are under the delusion that it’s OK. They don’t realize that the only reason it worked the first time was because the world was convinced that it was temporary and a one-off emergency measure.”

A dollar crash is the end game. The Fed has to keep monetizing and the printing presses have to keep running because Yellen-Biden-et al. have to keep interest rates low.

So, sure Janet, debt doesn’t matter.

US Treasury Blasts “Programming Alert” Email: Mnuchin To Appear On CNBC At 9am