Following last month’s dismal unemployment print, which saw the first contraction since April in December payrolls, expectations were high for a solid rebound in January – maybe too solid – and unfortunately while jobs did grow in January, the final number of +49,000 came in well below the 105K consensus estimate, if up solidly from December’s downward revised -227K, with revisions subtracting a total of 159K jobs from the past two months. 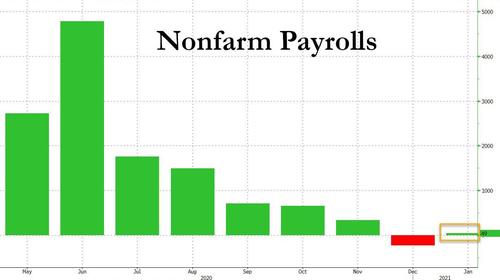 Looking below the surface, private payrolls, which exclude government jobs, rose by just 6,000 in January, a far cry from the 163K expected, while government jobs rose by 43,000 in the month, led by gains in state and local government education.  In January, employment edged down in:

Meanwhile employment in professional and business services rose by 97,000, with temporary help services accounting for most of the gain (+81,000).

As expected, and as was the case in December, job losses were concentrated in leisure and hospitality and retail trade. Service jobs – including those in travel and at restaurants – are unlikely to see meaningful gains until more Americans are vaccinated and Covid-19 infections see a meaningful decline.

There was some more bad news in the permanent job losses category which picked up again in January after a modest drop in December. 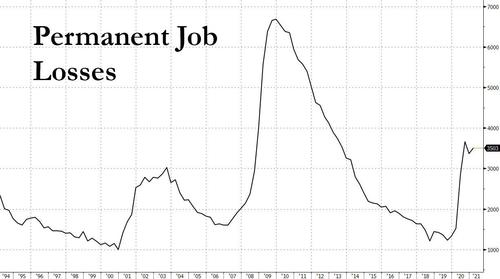 While the headline payrolls print was clearly disappointing, there was better new below the surface as hourly earnings rose 0.2% M/M, just below the 0.3% expected, but on an annual basis hourly earnings surged 5.4%, unchanged from last month’s upward revised print and above the 5.0% expected. 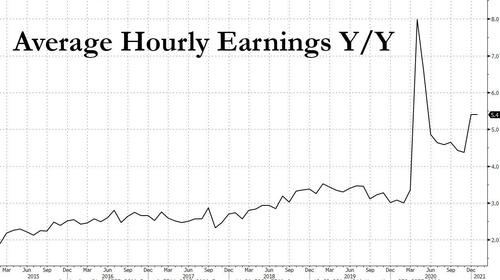 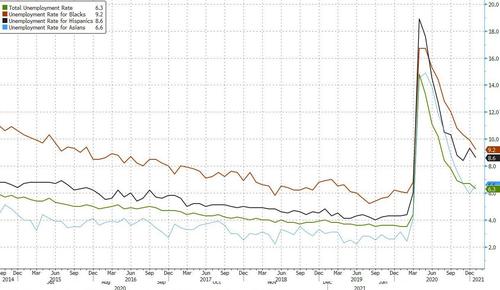 Alas, once again there was less than meets the eye, because a big reason for the drop in unemployment was the decline in the labor force, which shrank from 160.57MM to 160.16MM, resulting in a decline in the participation rate from 61.5% to 61.4%. 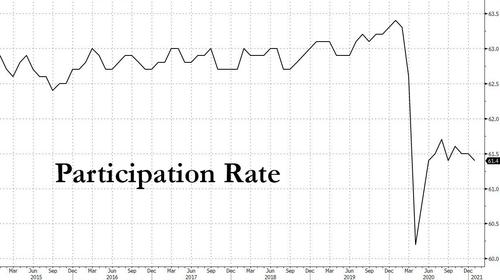 That suggests more people became so discouraged about the lack of opportunities – or simply fell back on government handouts – that they simply gave up looking for a job. That contributed to taking the jobless rate down, but that’s not a positive dynamic. Even so, the number of unemployed workers declined from 10.736MM to 10.130MM.

Here is a breakdown of where the key job changes in January:

Despite a few silver linings, the jobs report was quite ugly overall as BMO rates strategist writes:

“Overall, a disappointing report that has offset the recent bearish trend in Treasuries. Ahead of the release the Treasury market was weaker with the long-end of the curve the decided underperformer. Since the data, we’ve seen a modest reversal to effectively unchanged on the day. The question now becomes whether the once-again-relevant data is sufficient to offset the need for additional supply accommodation.”

Of course, it goes without saying the more bad news for the labor market is great news for stocks, and as BLoomberg economist Reade PIckert writes, “the January data may elicit more urgent calls for another pandemic relief package. President Joe Biden has proposed a $1.9 trillion package, but many Republicans prefer to hold off on more assistance and wait for the December $900 billion aid package to filter through the economy.”

Goldman Sounds The Alarm On Stocks: When Euphoria Is This High, “It’s A Good Time To Reduce Risk”