After last month’s dismal payrolls report, according to which the US labor market contract by a whopping 140K workers in December (primary as a result of 372K restaurant workers losing their jobs amid the latest round of covid shutdowns), renewed optimism has emerged that the worst is over for the US market and that tomorrow when the BLS reports the January payrolls, the surprise will be solidly to the upside.

Or maybe not all that solidly: as Newsquawk reports, the expectation is for headline nonfarm payrolls to rebound in January from the negative reading in December, but analysts do not seem convinced that January’s data will fully pare back the December downside, despite increasingly constructive labor market signals. While initial jobless claims data had worsened (until today when it unexpectedly smashed expectations), continuing claims data has improved; the ADP’s gauge of payrolls surprised to the upside in January, raising hopes that similar can be seen in the BLS report; within the ISM business surveys, the employment subcomponents improved in both the services and manufacturing sectors, the former rising back into growth territory.

Further propping up the optimistic view, earlier today Goldman raised its nonfarm payrolls estimate from 125K to 200k, above the consensus of +100k, due to “stabilization in dining activity and in the severity of business restrictions” which suggests a smaller or minimal drag from the coronavirus relative to December. While Big Data employment signals were mixed in the month, the generally showed stabilization or improvement. Goldman also expects fewer seasonal layoffs of retail, leisure, and temp help workers, due to already-depressed employment levels in those industries (the BLS seasonal factors embed a decline of roughly 1.2mn workers).

On the other hand, consumer surveys have not signaled that Americans are more optimistic about labor market conditions in January. Incidentally, a far worse print would be precisely what the market wants: from a trader’s perspective, the reaction to the data – particularly in the event of a big upside beat or a big downside miss – will solidify the stimulus debate as the argument that good data could be bad for stimulus prospects gains traction amid the improvement seen in some economic metrics, COVID trends, and vaccination rollouts recently. Alternatively, a huge miss would accelerate the passage of the Biden stimulus plan.

With that in mind, this is what consensus expects tomorrow:

A look at some of the factors behind the growing consensus view that the job market is on the mend, courtesy of Newsquawk:

ADP: Payrolls company ADP’s gauge of January labor market conditions surprised to the upside, printing 174k vs an expected 49.0k, while the previous was revised up from -123.0k initially reported to -78k. After the data, Pantheon Macroeconomics said that given the noise in the data and the unreliability of the seasonals over the turn of the year, the recent trend in payrolls has been flat, adding that the ADP data has been close to the official payroll numbers in recent months, so a modest increase in Friday’s BLS number looks a decent bet. The consultancy looks for an aboveconsensus 200k reading, and ahead, is optimistic that the lifting of lockdown restrictions in February may see larger monthly prints from March onwards, if the vaccination rollouts continue and newer variants of the virus do not force further restrictions.

SURVEYS: Within both the manufacturing ISM and services ISM data, the employment sub-index ticked up in January. The manufacturing sector saw the employment sub-index rise from 51.7 to 52.6, remaining in growth territory for a second month; the services employment sub-index moved back into expansion, rising from 48.7 in December to 55.2 in January. ISM noted that comments from respondents in the services sector included “new hires required to perform awarded work in 2021” and “trying to replace and build staff in critical areas,” and after the manufacturing data, ISM said for the fifth straight month, survey panelist comments indicated that significantly more companies are hiring or attempting to hire than those reducing labor forces. In Markit’s composite PMI for the US, the data compiler said a softer rise in employment at service providers offset a quicker increase in job creation at manufacturers, as pressure on service sector capacity waned. Nevertheless, the business surveys contrast with consumers’ assessment of current business conditions, which weakened in January according to the Conference Board, and consumers’ assessment of the labor market was also less favorable the report said, with consumers saying jobs were ‘plentiful’ declining from 21.0 to 20.6, while those claiming jobs were ‘hard to get’ rose from 22.9 to 23.8.

JOB CUTS: Data from Challenger showed that planned job cuts for US based companies ticked slightly higher in January, rising to 79,552 from 77,030. But encouragingly, Challenger said that COVID was no longer the leading cause of cuts; in fact, it was a demand downturn that was the leading reason cited for job cut announcements, followed by restructuring; COVID was only responsible for 4,620 of the January job cuts figure. The report added that we are beginning to see a levelling-off in announcements, which is a positive sign for the months ahead. The report also said that firms might be reassessing staffing levels, and waiting on the impact of the government relief bill, before making any additional workforce decisions. The Challenger data might offer us an early insight into how consumers will enter the normalization phase of the pandemic; are they likely to throw caution to the wind and resume consuming at prepandemic levels, or will they remain cautious in the face of uncertainties; the contrast between business surveys and consumer surveys may, at this point, lean towards the latter.

Cribbing from Goldman’s latest upgrade of the labor situation published earlier today, here are the bank’s arguments for a better-than-expected report: 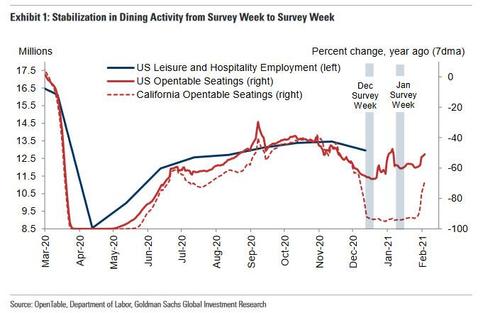 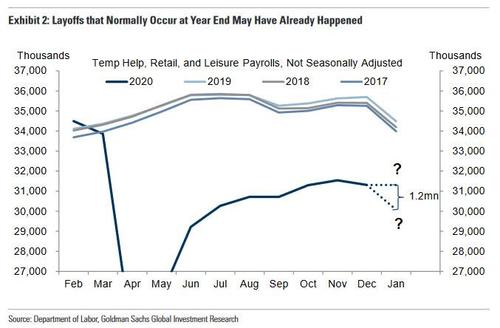 ARGUING FOR A WEAKER THAN EXPECTED REPORT:

Finally, a look at how the market could react:

The market reaction will be informative for traders, particularly in the event of a big beat or a big miss. An argument is gaining traction that improving economic data and COVID trends in the US after some stark concerns at the end of last year/start of this year,  combined with a quicker than expected vaccine rollout, may stoke the hawkish argument that less monetary and fiscal stimulus might be warranted in the US, which could be detrimental to risk assets (the key catalysts for stocks are continued official support, improving corporate earnings, and continued improvement in COVID trends – if one of these is shaken, it may lead traders to reassess the bull case). After this week’ s solid ISM services data and ADP data on Wednesday, some downside was seen in the equities complex; this downside was only subsequently parred after a blog post from White House economic advisors, who warned about the long-term scarring potential on the economy (and of course implying that in spite of some of the better trends seen recently, a large degree of stimulus was still appropriate). But while policymakers adopt a cautious approach on scarring, some market participants remain unconvinced: as Goldman Sachs recently noted, signs of long-term damage to the economy remain surprisingly limited so far, calculating that around two-thirds of the jobs lost in the pandemic have now returned, while total company bankruptcies remained beneath pre-pandemic levels in December.

No, Dogecoin Does Not Compete With Bitcoin