Japan Rocked By Magnitude 7.1 Earthquake Off Fukushima, No Tsunami Reported

Almost a decade after the catastrophic Fukushima disaster which was sparked by a massive M9.0 quake, late on Saturday night a magnitude 7.1 earthquake hit off Fukushima prefecture in northeastern Japan, the Japan Meteorological Agency said. The epicenter of the quake was off the coast of Fukushima, about 220 kilometers (135 miles) north of Tokyo. The strong quake was felt widely across Japan, including shaking of four on Japan’s seven-point scale in the capital Tokyo. 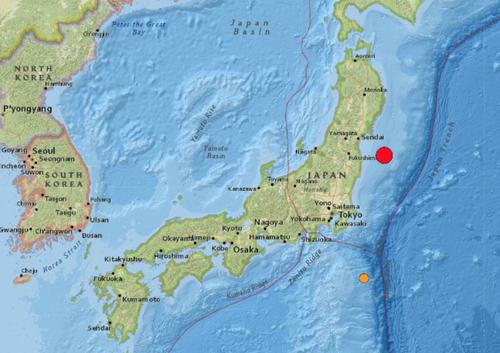 According to NHK the shaking lasted about 30 seconds.

NHK reporting the shaking lasted about 30 seconds. (Felt longer to me).

Anchors reporting live on the event were wearing helmets:

⛑ Anchors reporting from Fukushima, Iwate and Miyagi with helmets on. Smart.

Power outages have been reported in Fukushima prefecture. Some traffic lights are also out. pic.twitter.com/HFjcUqTLZN

While more than 800,000 households were hit by blackouts, according to TEPCO, so far there has been no threat of a tsunami from the quake, and no immediate reports of major damage.

NHK reporting NO THREAT of tsunami as of now.

Still, felt like a pretty long one even in Tokyo. It started with sideways shaking, then turned into up and down shaking. I’ve never felt that before. #earthquake #地震 pic.twitter.com/iHevrTzNql

Additionally, no immediate abnormalities were reported at the nuclear plants in Fukushima, according to local media.

Woke up to shaking in Tokyo. Turned on TV to learn Magnitude 7.1 earthquake just hit off Fukushima prefecture — just 3 weeks ahead of the 10 year anniversary. Hope everyone is okay. pic.twitter.com/uT0LKJqqHd

The earthquake occurred less than a month before the 10-year anniversary of the 2011 earthquake and tsunami in the broader region that left about 19,000 people dead or missing. The tsunami hit the Fukushima Dai-ichi nuclear plant, leading to a meltdown at three nuclear units.

Ayatollah Khamenei Calls Israel “Not A Country, But A Terrorist Base” As Vienna Talks Intensify

“Mistakes Were Made”: Plan To Rename 44 San Francisco Schools Placed On Hold