Judging by the solid ascent in risk assets today, traders are confident that last Friday’s payrolls report was spectacular, or as BofA put it, “it was everything we could have hoped for” where in addition to a whopping 916K jobs added in March amid broad-based job creation, the unemployment rate fell to 6% from 6.2% while the underemployment rate (U6) declined to 10.7% from 11.1% (vs 7% pre-pandemic). The drop in the U-rate occurred despite a rise in the labor force participation rate to 61.5% from 61.4%; finally, the employment-to-population ratio ticked up to 57.8% (pre-COVID was 61.1% so still needs to move higher to correct fully).

But we already knew all that: the real question is what does this report portend about the future, and here BofA comes out with a surprising finding: according to BofA’ Michelle Meyer, at this pace, “we will return to the pre-pandemic level of jobs by year-end” and the risk, according to BofA’s chief economist, “is that the rate of job growth actually accelerates further given the stimulus-induced boost to spending and economic reopening.”

If BofA is correct, it means that payrolls for the rest of the year would look something like this (BofA forecast in red), as the US adds just over 930K jobs per month for the next 9 months. 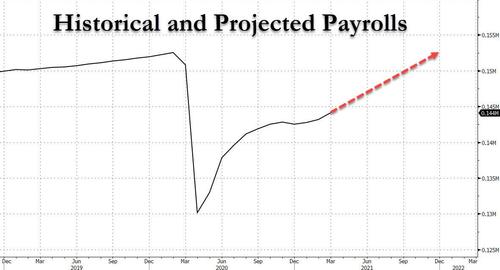 This brings up a critical question, however: with the Fed “laser-focused” on unemployment, will this overheating in the economy lead to an early hike? A look at market-implied odds certainly lends support to this theory: as we showed earlier, the market is rapidly accelerating the timeline for The Fed’s first rate-hike (eurodollars now expect more than one rate hike by the end of 2022)… 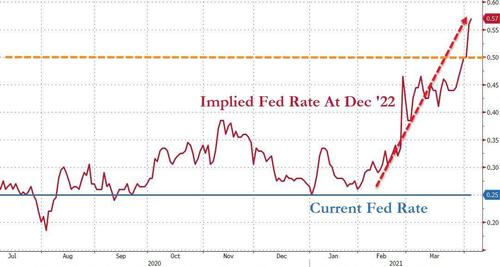 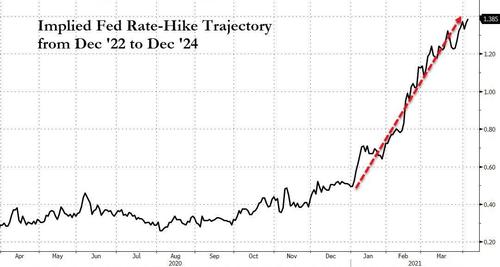 But here, BofA does not think that even almost 1 million jobs per month is sufficient for the Fed to break its promise of no rate hikes through 2023, and Meyer writes that “even though the Fed will be encouraged by the strength in the labor market but will be far from declaring victory.” Here’s why:

As Fed Chair Powell has made crystal clear, the Fed will be reactive in this cycle, waiting for evidence of a sustainable recovery, looking past near-term strength in the data given concerns that it will prove temporary. Fed officials will remain “resolutely patient.” Indeed, many key labor market indicators remain far away from prepandemic levels (Exhibit 2). 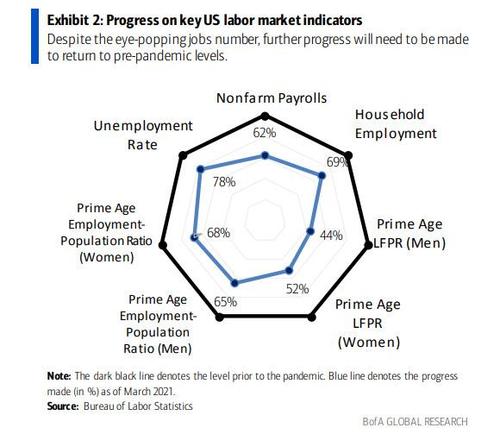 This, to BofA, means that markets need to focus on a broader set of economic indicators in order to gauge the sustainability of the recovery. As such, the bank has put together a dashboard of indicators that the Fed will be monitoring on the labor market and inflation. On the labor market, focus on the employment-to-population ratio across age and demographic groups. It will be important to understand the push of the labor market into inflation via wages so we advise following the Employment Cost Index (ECI) and survey-based measures of income growth – both are still restrained at low levels.

BofA’s advise (of course) is to look past the headline core PCE index (which as we wrote over the weekend has a 33% chance of hitting 3% in 5 years) and instead monitor the trimmed-mean measure, OER and a variety of expectations. While the dashboard is starting to flash yellow (maybe some light green), “we are still far from the shades of dark green that the Fed would like to see”, according to BofA, which is confident that that the Fed will stick to the message of patience “until they can become convinced that the economy isn’t just seeing a temporary boost due to stimulus + reopening.” 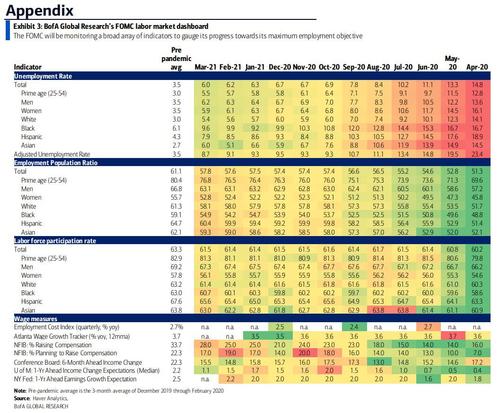 Meyer’s conclusion: “We wish the Fed luck – the communication will be increasingly challenging given the likely phenomenal data on the docket.”

A photo of indescribable innocent beauty

What Now After the Botched US Withdrawal from Afghanistan? (PODCAST)