As we have reported numerous times, at this point, the reality that vaccine passports will essentially become an individual’s ‘passport to life’ seems like a foregone conclusion. The EU is already working on rolling out a digital system to allow residents to prove their vaccination status in a desperate attempt to save the summer tourism season, which faced devastation last year because of the pandemic.

As the Biden Administration works with the private sector to develop a standardized way for Americans to prove their status (an effort that’s being led by airlines and their consultants), MSNBC’s Joe Scarborough, a frequent and early GOP critic of President Trump, wants Americans to know that if they don’t support vaccine passports, then they’re “an idiot” and a “moron” who should probably “crawl back to your cave.”

We imagine Scarborough’s corporate sponsors, who are depending on the scheme to entice people to get out and consume, 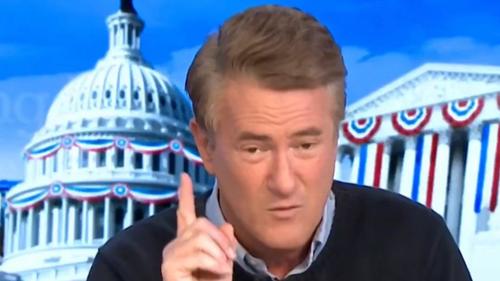 Republicans and civil liberties advocates have criticized vaccine passports as s step toward “totalitarian communism”, and even Florida Gov. Ron DeSantis has vowed not to let them become a requirement in the state of Florida.

But that apparently didn’t occur to Scarborough as he chided Americans for “following conspiracy theories” and for living in “ignorance and stupidity.”

“They’re being stupid, they’re following conspiracy theories…they don’t understand because maybe they’re such morons,” he thundered. “If they don’t want to take the vaccine and they want to die, that’s their right as Americans. They can live in ignorance and stupidity.”

“Our government, our sports teams, our concert promoters damned well better put together something where you can show your vaccine receipt,” he said.

“This anti-science idiocy, you know, let them do that under a rock or in their caves,” he added, concluding that “the time to try to reason with these people has long passed.”

Scarborough was instantly blasted online for his rant, which some called out as “totally unhinged.”

Like in The Matrix, there are those who will fight for their own enslavement. https://t.co/LPzYvNNIFH

With enough enthusiasm from the private sector, the US government may only step in to ensure standardization. Speaking to reporters on Monday, White House Press Secretary Jen Psaki said that “we want to drive the market toward meeting public interest goals.” The government “is not viewing its role as the place to create a passport, nor a place to hold the data of citizens,” Andy Slavitt, a White House Covid-19 adviser, added during Psaki’s briefing.

Of course, views on vaccines are much different in Europe, where Germany on Tuesday is reportedly planning to bar the AstraZeneca jab, limiting to only patients under the age of 60. The effort follows publication of new research purporting to link the AstraZeneca jab with rare, but deadly, blood clots that have occurred in a small number of patients. The EMA and WHO haven’t denied a connection, but continue to insist that benefits of the jab far outweigh the costs.

Anomalies In The Capitol Melee

It’s The Lockdown Trade That Keeps On Delivering

The True Feasibility Of Moving Away From Fossil Fuels