Authored by John Vibes via TheMindUnleashed.com,

Joel Osteen’s Lakewood Church received a $4.4 million loan through the Paycheck Protection Program, as part of the federal CARES Act that was intended to be a stimulus to keep businesses and employees afloat while the pandemic kept everyone at home.

Churches were also eligible for the money, and some of the most prestigious churches in the country took advantage of the opportunity.

Joel Osteen’s Lakewood Church was not on the initial list of recipients and claimed that they did not apply to receive any money. However, the church later applied and was granted $4.4 million, according to the Houston Chronicle.

Osteen himself is estimated to have a net worth of over $50 million, with his church taking in $43 million a year in collections. 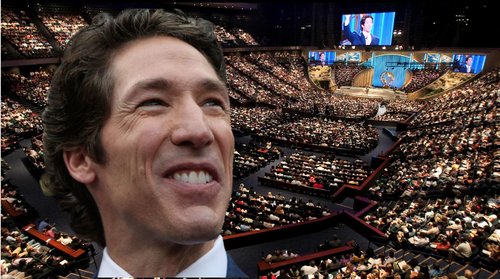 Churches don’t even pay taxes, which many people feel should disqualify them from the program.

Meanwhile, many small business owners who attempted to get funding through the federal Paycheck Protection Program found that the money had dried up within a week of the program’s launch. It turned out that large publicly traded corporations were the first to gain access to the loans because they had teams of lawyers on standby who already had a working relationship with the government.

Large corporations like Shake Shack and Ruth’s Chris Steakhouse received millions in PPP loans, but were later forced to return the money after a massive public outcry was sparked by their applications.

It was also revealed that over 9,000 Catholic churches were approved for the loans. However, the Vatican, which is the global head of the Catholic Church, is one of the most wealthy organizations in the world. While their exact holdings have been called “impossible to calculate“, bankers estimate that the Vatican has been 10 and 15 billion dollars in cash, land, and investments alone.

Fraud was also rampant in the program. Tens of thousands of inmates in the state of California, even serial killers, and high profile murderers like Scott Peterson, were able to defraud the government of roughly a billion dollars through pandemic unemployment benefits. Prosecutors said that this was possibly the largest fraud scheme in California history.

Sacramento County District Attorney Anne Marie Schubert said that between March and August, inmates across every California prison filed 35,000 claims totaling around $1 billion. $140 million in benefits had already been sent out.

Due to the rushed nature of the PPP program and the urgency of the pandemic, the government was sending out funds to pretty much anyone who applied, without checking IRS records first. However, the agency is starting to catch up with many of these scammers as they go back and evaluate which recipients qualify for the loan forgiveness. Numerous cases of PPP scammers have been reported across the country.