John McAfee, an unapologetic outlaw who may or may not have murdered his neighbor in Belize for poisoning his dogs, has been indicted by US authorities on several charges – including conspiracy to commit commodities and securities fraud, and money laundering conspiracy offenses. 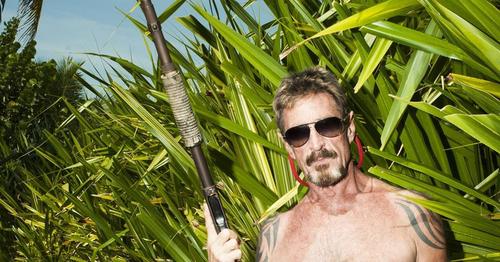 The charges, according to Bloomberg, stem from two schemes ‘relating to the fraudulent promotion to investors of cryptocurrencies qualifying under federal law as commodities or securities.’

USA Strauss: As alleged, “McAfee and Watson exploited Twitter and enthusiasm among investors in the emerging cryptocurrency market to make millions through lies and deception, raking in more than $13 million from investors they victimized

Also indicted is Jimmy Watson – an executive adviser to McAfee’s cryptocurrency team. Watson was arrested in Texas Thursday night, while McAfee is currently being detained in Spain on separate criminal charges filed by the DOJ’s tax division.

“McAfee and Watson exploited a widely used social media platform and enthusiasm among investors in the emerging cryptocurrency market to make millions through lies and deception,” said Manhattan US Attorney Audrey Strauss. “he defendants allegedly used McAfee’s Twitter account to publish messages to hundreds of thousands of his Twitter followers touting various cryptocurrencies through false and misleading statements to conceal their true, self-interested motives.”

In October, the 75-year-old McAfee was arrested in Spain on charges of tax evasion after allegedly failing to declare earnings into the millions of dollars from promoting cryptocurrencies, consulting work, speaking fees and the sale of the rights to his life story for a documentary. He was detained while attempting to board a flight from Barcelona to Istanbul. The arrest followed a June 2020 indictment charging him with tax evasion and wilful failure to file tax returns.

McAfee reportedly hid assets from the Internal Revenue Service, including real estate, a yacht and a vehicle, which he kept in the names of other people.

The SEC, meanwhile, also brought civil charges against McAfee – alleging he made over $23.1 million in compensation from ‘false and misleading cryptocurrency recommendations’ which he failed to disclose.

Why The Silence In The Face Of COVID Tyranny?

“There’s Not A Lot Of Enthusiasm For That” – GOP, Moderate Dems Oppose Biden Tax Hikes