Be afraid, be very afraid (oh, and do not push back against any plans to spend trillions by the government)… that appears to be the message from Fauci and his friends in the Biden admin.

After months of suggesting that life could start to feel “normal” again this fall – if the vaccine rollout worked as planned – Fauci in an interview with LA Times Today this week gave a new prediction.

“Hopefully, by the time we start entering 2022, we really will have a degree of normality that will approximate the kind of normality we’ve been used to,” Fauci said.

That was a departure from previous predictions, including remarks he gave at conference hosted by the Association of Performing Arts Professionals just last month.

“If everything goes right… by the time we get to the early to mid-fall, you can have people feeling safe performing onstage as well as people in the audience,” he said on Jan. 9.

Biden had clearly gotten the memo before going on stage at a CNN Town Hall on Tuesday, suggesting that life could feel normal again in “Christmas.” 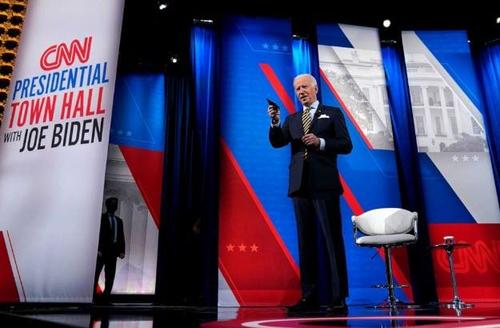 But, there is a silver lining – that will likely be rapidly censored and removed from the narrative – as a Johns Hopkins surgeon, Dr. Marty Makary, penned an Op-ed in the WSJ this morning saying that we will have herd immunity by April. 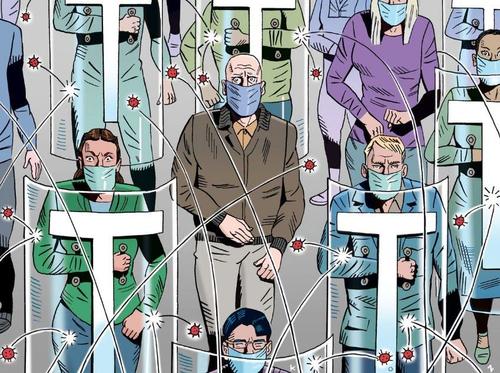 “Experts should level with the public about the good news…” exclaims Makary (who is likely on the verge of getting canceled), as he cites the “miracle” 77% drop in cases over the past 6 weeks and that testing likely only captured about 10% – 25% of infections; he extrapolates that to saying 55% of Americans have natural immunity (and add to that the 15% of Americans that have been vaccinated). Additionally, he cites Scott Gottlieb, former FDA commissioner, who believes that 250mm doses of the vaccine will have be delivered to 150mm people by the end of March.

“There is reason to think the country is racing toward an extremely low level of infection.

As more people have been infected, most of whom have mild or no symptoms, there are fewer Americans left to be infected.

At the current trajectory, I expect Covid will be mostly gone by April, allowing Americans to resume normal life.”

Critically, Makary explains the recent plunge in cases, hospitalizations, and deaths is not policy-related (no matter how much the politicians and their media lackeys push that narrative):

“…the consistent and rapid decline in daily cases since Jan. 8 can be explained only by natural immunity. Behavior didn’t suddenly improve over the holidays; Americans traveled more over Christmas than they had since March. Vaccines also don’t explain the steep decline in January. Vaccination rates were low and they take weeks to kick in.” 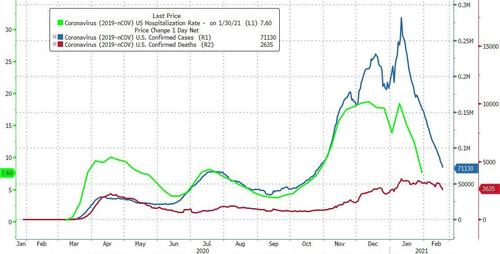 Assuming his view is the correct view, JPMorgan notes that the first hurdle is politicians and their willingness to remove restrictions.

The primary one is getting kids back to school. This would allow some parents to re-enter the workforce and drive some mobility.

This is not a binary effect though.

We still need to repair the “economic scarring” which will show up primarily in private businesses. There are businesses that will still fail and those that have already shuttered that need to give way to a new enterprise.

One metric to track in macro data is Services PMI. Manufacturing has already rebounded by the shift to Services is one effect that economists will view to check the on-going inertia of the reopening.

While it may be too late in the school year to have schools re-open on a large scale, if the US has a promise that summer camps and schools re-open this summer and fall, then that should have a material impact on sentiment and the economy.

Lastly, vaccines are now being tested on children (CBS; NYT). Positive results here mean that we may have approval for children, perhaps as young as 6, by this summer. Again, this is positive for the re-opening & reflation themes.

Combining all of these factor together, this would reignite the Reflation theme.

All of which is good news for the economy, but Makary‘s concluding paragraph says everything about the ‘politicization’ of the virus in America and why this ‘good news’ – both health-wise and economy-wise – may not be allowed in the national narrative:

“Some medical experts privately agreed with my prediction that there may be very little Covid-19 by April but suggested that I not to talk publicly about herd immunity because people might become complacent and fail to take precautions or might decline the vaccine. But scientists shouldn’t try to manipulate the public by hiding the truth. As we encourage everyone to get a vaccine, we also need to reopen schools and society to limit the damage of closures and prolonged isolation. Contingency planning for an open economy by April can deliver hope to those in despair and to those who have made large personal sacrifices.“