JPM: Clients Are Getting Concerned About Concentration Risk

The global sell-off continues but rotation is the better description. We continue to see large-cap Tech being sold to fund the Reopening/Reflation trade. Client conversations reveal that much of this selling is in the more liquid names so there are now concerns about concentration risk should the equity markets have a textbook correction.

Inflation is another popular topic and this morning 5Y breakevens touched 2.49, a level last seen in July 2008. These inflation concerns are driven by the extraordinary fiscal and monetary stimulus and then exacerbated by the moves in the commodity markets, as illustrated in the next two charts. While breakevens and PCE, the Fed’s preferred measure of inflation, tend to track together we can see clearly that breakevens, one indicator of the market’s expectations for inflation, tend to overshoot PCE levels. The conclusion is that fears of the Fed pulling forward its rate hike liftoff are overblown. 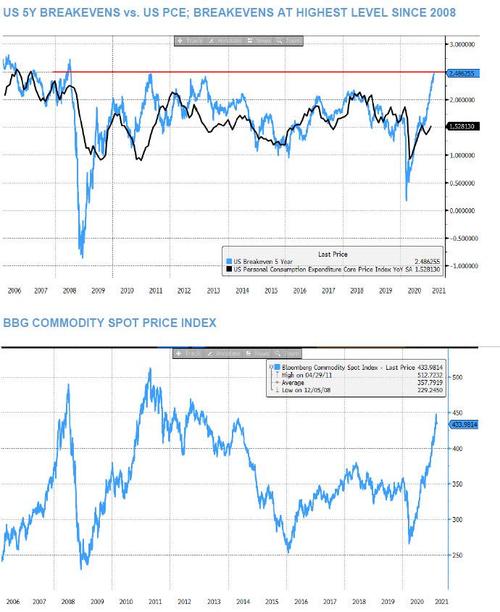 While equity markets have been choppy over the past few weeks, overall gross and net exposures have declined as the markets have pulled back a bit (i.e. mostly due to mark-to-market effect), but the underlying tone remains relatively constructive. If anything, it seems that the pullback in the market (and particularly in areas that have outperformed for a long time) has allowed HFs to increase shorts once again.

Are Your Netflix Binges Killing The Planet?