Over the weekend we reported that for those who “hoped that the worst is now over, JPM has some bad news”, referring to the latest calculation for month and quarter-end selling by JPM quant Nick Panigirtzoglou who said that the equity rebalancing flow question is resurfacing in client conversations. And to answer this question quantitatively, the quant calculated that as much as $316BN in quarter-end selling was on deck (split between  Mutual Funds -$107BN, Defined Pension -$110BN, Norges Bank -$65BN and GPIF -$34BN).

However, while this narrative may have been desirable when stocks were in freefall (if only to goalseek bearish client theses), now that they are surging JPM is eager to find a new bullish offset, and to do so, Panigirtzoglou is now shifting attention from forced month-end selling to stimmy-funded buying, writing that if one assumes the $1,400 US stimulus checks start being paid this or next week, “there is a good chance that we could see a repeat of the end of last December, with a reacceleration of the US retail impulse outweighing any negative impact from pension fund rebalancing flows into quarter-end.“

Of course, the question of just how much buying the Biden stimulus will unleash is one we touched on first last week (see “How Much Money Will Biden’s New Stimulus Inject Into The Market“) when we quoted DB’s chief credit strategist Jim Reid who said that “it’s worth highlighting that a large amount of the upcoming US stimulus checks will probably find their way into equities.” He referred to a survey conducted last week by DB’s chief equity strategist Binky Chadha polling online brokerage account users which suggested they would invest around 37% of future stimulus checks in the stock market. This is a material force because as Reid notes, “behind the recent surge in retail investing is a younger, often new-to-investing and aggressive cohort not afraid to employ leverage.” 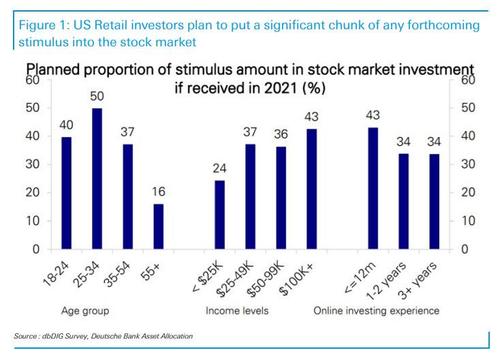 So here is Reid’s math:

“Given stimulus checks are currently penciled in at c.$405bn in Biden’s plan, that gives us a maximum of around $150bn that could go into US equities based on our survey. Obviously only a proportion of recipients have trading accounts, though. If we estimate this at around 20% (based on some historical assumptions), that would still provide around c.$30bn of firepower – and that’s before we talk about any possible boosts to 401k plans outside of trading accounts.”

Needless to say, this is a far more nuanced take than JPM’s unquantified, shotgun approach, and if Reid is right, there is just $30BN in stimmy inflows set to enter the market thanks to Biden, while more than $300BN in forced selling remains on deck (if JPMorgan is correct).

Perhaps sensing that his attempt to convert the near record quarter-end forced selling to a bullish catalyst is weak at best, the JPM quant also writes that “on the negative side, the recent bond yield increases and the loss of momentum in stocks popular with retail investors are creating a more challenging environment for retail investors than last December, raising the possibility that US retail investors might decide to invest less from the stimulus checks in the stock market. In this negative scenario, the rebalancing flows would likely dominate into quarter-end.”

Still, just to hedge all bases, Panigirtzoglou writes that his “bias is more towards the positive scenario, but admittedly without a lot of conviction.” Which is understandable: after all the mere mention of a possible upside case will allow the JPM quant who angered many JPM clients with his quarter-end doom and gloom, will allow him to counter that he, too, was bullish and that it wasn’t his fault for creating a liquidation narrative.

Joe Biden is not a hologram. But…