The US economy slowed considerably in recent months, as it faced a dark winter of COVID-19 infections. New retail foot traffic and credit card data from JPMorgan points to economic headwinds developing early in the new year.

Despite the vaccine rollout and stimulus checks that have boosted confidence among stock market investors hoping economic activity will shortly pick up, JPM’s Mislav Matejka showed consumer activity is off to a slow start.

“We think February will remain problematic from the dataflow perspective, but the delta will start to look much more favorable on this front from March-April,” Matejka said.

Experian foot traffic data on a year-over-year basis, more specifically, focus on North America, has materially slumped since late September and moved lower into the third week of January. 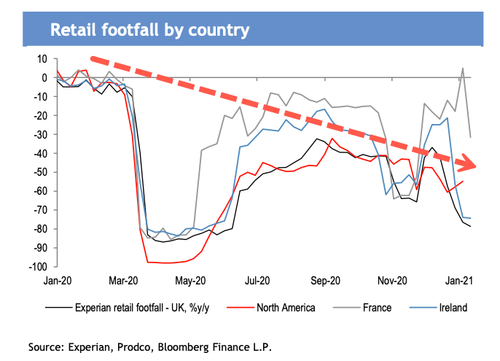 Meanwhile, economic forecasters have suggested stronger growth for the first quarter due to a massive vaccination campaign where some 33.7 million doses have already been administered.

But Powell admitted, “we’re a long way from a full recovery.”

… and certainly, that is the case with another stimulus round in limbo. 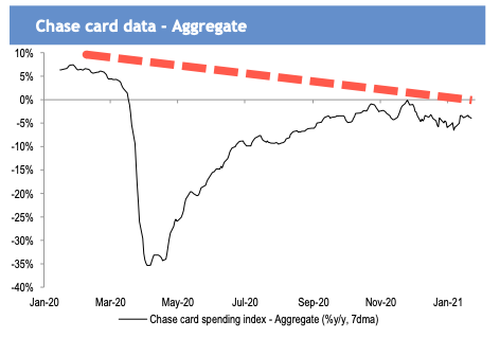 While it could be another couple of weeks until another round of COVID relief is passed, JPM’s consumer data, from retail foot traffic to credit card spending, suggests a robust recovery to begin the year is nowhere to be found.