It’s another big week for earnings and data, with the PMIs for January (today and Wednesday) as well as the US jobs report (Friday) the main highlights. In terms of a peak week of earnings, Amazon and Alphabet tomorrow are going to see the main focus.

As DB’s Jim Reid adds, there’s also the Bank of England’s latest decision on Thursday, along with further political developments in Italy as consultations continue on forming a new government. Expect to hear more about the US stimulus package with the reconciliation process likely starting as a bipartisan approach is probably unlikely to work even if GOP lawmakers have offered a $600bn package over the weekend. Biden will meet with 10 Republican senators today to discuss.

Looking at other data, DB economists expect a +100k increase in payrolls, which comes off the back of a -140k decline in December, and see the unemployment rate remaining at 6.7%. That decline in nonfarm payrolls in December marked the first time that the US economy had shed jobs since the height of the first wave of the pandemic back in March and April 2020, and it’s worth noting that the number of people in work still remains nearly 10m lower than its prepandemic peak back in February, so there’s still a long way to go before we get back to normality in the labor market. After last week one wonders how many of these unfortunately displaced were part of the r/wallstreetbets crew. 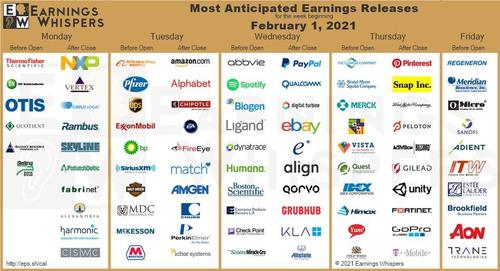 At the midpoint of earnings season – 52% of the S&P has reported – the market has seen a record high number of beats (85%), with the size of those beats roughly in line with last quarter at 17% which is close to the highest on record. This reflects how estimates have continued to lag the macro data, however the market has not necessarily rewarded these beats. Equity positioning was relatively high coming into the earnings season, valuations high and investors may be looking ahead to further lockdowns in the coming quarter and worries over upcoming guidance.

Courtesy of DB, here is a day-by-day calendar of events

Finally looking at just the US, Goldman notes that the key economic data releases this week are the ISM manufacturing and non-manufacturing reports on Monday and Wednesday, jobless claims on Thursday, and the January employment report on Friday. There are several speaking engagements from regional Fed presidents this week. 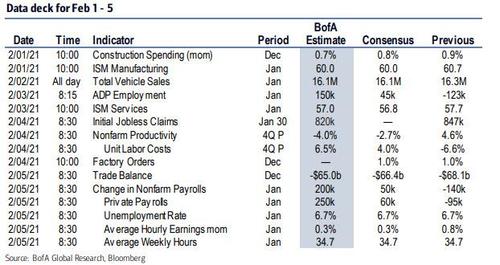 “I’m Choosing The Risk Of Getting COVID”: Over Half Of Health Care Workers At California Hospitals Refuse Vaccinations