It’s shaping up as a very eventful week again, with the Fed’s latest monetary policy decision on Wednesday expected to be a highlight. Indeed Wednesday is a blockbuster day with Apple, Tesla and Facebook reporting to “add to the fun” as Deutsche’s Jim Reid puts it. 122 S&P 500 companies report in total over the coming 5 days in the first blockbuster week for earnings.

In terms of economic data releases, a number of countries release their Q4 GDP readings for the first time.  In politics Congress will start the high level negotiations on Biden’s proposed stimulus package. House speaker Pelosi has suggested she wants to pass something through reconciliation within two weeks. However the realities will likely extend this timeline. Nonetheless plenty of opportunities for headlines now. Staying with politics, the Italian government has a Senate vote this week (likely Wednesday or Thursday) on the annual report of its justice minister. A loss would raise the stakes for PM Conte and although fresh elections are unlikely, the uncertainty is building as to what happens next to his administration. Indeed, Italian daily Corriere della Sera has reported that Conte may quit if he loses.

In more detail on some of the upcoming events, in terms of the Fed, economists do not anticipate any material changes to the policy settings and message from the FOMC, after they adopted outcome-based forward guidance for asset purchases in December. Furthermore, they expect the statement to be untouched, aside from acknowledging a recent softening in the data. The big question on investors’ minds will be any timetable for tapering purchases, though Powell is likely to adopt a dovish tone on this, and reiterate that it’s premature to contemplate a potential timeline given the challenging near-term outlook and remaining uncertainties.

On the data side, the main highlight will be the first look at the Q4 GDP numbers for a number of countries, including the US (Thursday), France and Germany (both Friday). Given the lockdowns that were imposed in a number of European countries late last year, DB economists are forecasting a Q4 contraction in the key European economies, including a -1.5% quarter-on-quarter decline in Germany, and a -6.2% decline for France. The US should fare relatively better however, with economists forecasting Q4 growth at an annualized rate of +4.5%. 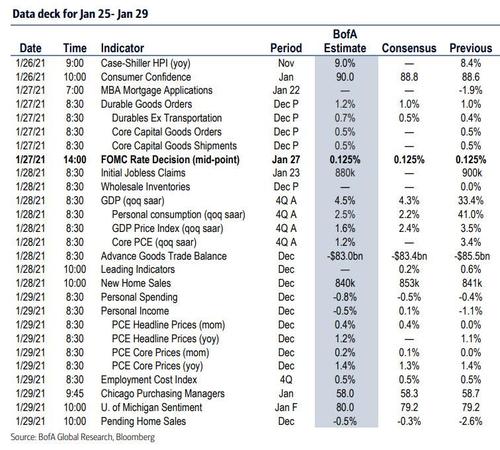 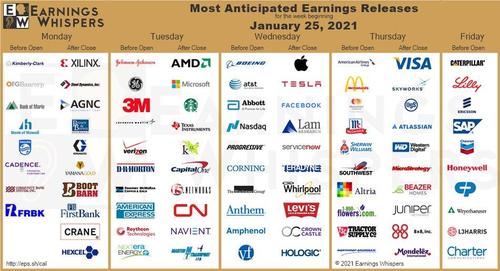 Finally, looking at the US economic data, Goldman writes that the key economic data releases this week are the durable goods report on Wednesday, Q4 GDP release and jobless claims on Thursday, and PCE inflation and the employment cost index on Friday. The January FOMC meeting is this week, with the release of the statement at 2:00 PM ET on Wednesday, followed by Chair Powell’s press conference at 2:30 PM.