While last week’s price action was all about bonds with little focus on fundamentals, the main highlights this week will be on Friday’s jobs report as well as the Fed speakers in their final week of comments before the blackout period begins ahead of the March 16-17 FOMC meeting according to DB’s Jim Reid. Today we see Williams, Bostic, Mester and Kashkari speak but Brainard’s speech on financial stability this morning US time is probably the one to watch for any official Fed comments on last week’s events

Brainard will also make an appearance tomorrow, as will Daly. Evans speaks on Wednesday with Powell himself on Thursday. So plenty of opportunity for the Fed to get a message across to the market. They will likely have been troubled by the recent rise in real yields and possibly by the repricing of Fed Funds contracts.

Looking forward, in terms of other main events this week outside of the Fed, there are a number of highlights. Key data releases include the February PMIs (today and Wednesday) and the monthly jobs report in the US (Friday), with some attention on the UK budget on Wednesday which may be the first major country to start tax rises in some areas as a result of the pandemic. Talking of tax rises, the US decision on Friday not to stand in the way of a global digital tax is a breakthrough on a multi year attempt to harmonize this with the OECD being the driver of the multilateral plan. Although many hurdles may still exist, not least getting it passed through the US Congress, this is certainly a step forward on this plan and could have long-term implications, especially for tech.

According to BofA, hiring likely saw a modest pickup in Feb with nonfarm payroll growth of 225k versus 49k previously. The unemployment rate should hold at 6.3% amid increased participation. The ISM surveys likely moderated to still robust readings, with the bank expecting manufacturing to fall to 57.5 from 58.7 and services to decrease to 58.0 from 58.7. Pay attention to the prices paid components which have been on the rise. 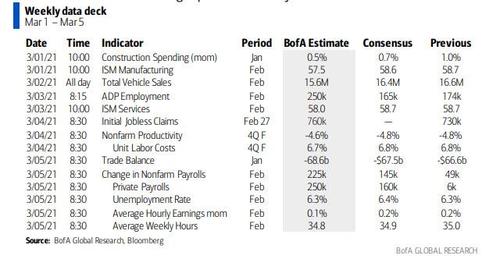 Finally, we’re coming to the end of earnings season now, with 480 companies in the S&P 500 having released their earnings at time of writing. Around 79% of them have reported a positive surprise on earnings, and c.70% have reported a positive surprise on sales. Over the week ahead, a further 15 companies in the S&P 500 will be reporting, as well as 64 from the STOXX 600. Among the highlights to watch out for include Zoom today, Target tomorrow, Prudential on Wednesday, Broadcom, Costco, Merck, Aviva and Lufthansa on Thursday, and the London Stock Exchange Group on Friday.

Below is a day-by-day calendar of events, courtesy of Deutsche Bank

Finally, focusing just on the US, Goldman writes that the key economic data releases this week are the ISM manufacturing and non-manufacturing reports on Monday and Wednesday, jobless claims on Thursday, and the February employment report on Friday. There are numerous speaking engagements from Fed officials this week, including Chair Powell on Thursday.

April Payrolls Preview: It Will Be A Blowout Number But Will It Be “Too Blowout”

A Family Brawl In The House Of Trump