In another week which will likely be dominated by political events as traders follow the second impeachment of Donald Trump, DB’s Jim Reid writes that this week isn’t the busiest in terms of planned events with the data highlights including the US CPI (Wednesday) and retail sales (Friday) data for December, while there’ll also be the release of the ECB’s account of its December meeting (Thursday) and the Federal Reserve’s Beige Book (Friday). Reid expects that the economic highlight will be Biden outlining more details on his new administrations priorities on Thursday. This may give us some clues on the direction of travel for stimulus that he aims to get through Congress.

Here is a visual breakdown of key data, courtesy of BofA: 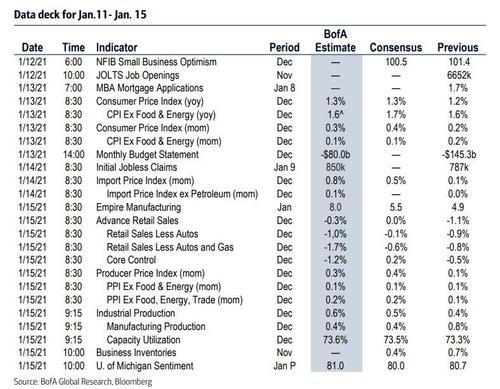 Of course, there’ll be lots of attention on whether the Democrats try to impeach President Trump with less than 10 days left in office but it will be more of a curiosity than a market moving event. Overnight, the House speaker Pelosi has said that Democratic leaders will move to impeach this week unless VP Mike Pence and the cabinet invoke the 25th Amendment. So a busy few days ahead in the Capitol.

Finally, there are a limited number of earnings releases, ahead of a much busier earnings calendar over the coming weeks: Blackrock (Thursday), JPM, Citigroup and Wells Fargo (Friday) are the highest profile companies kicking things off. The full day by day week ahead is at the end of the piece today.

Below, courtesy of Deutsche Bank, is the day-by-day calendar of events

Amplify Trading‘s Anthony Cheung has broken down the key events in the week ahead in the following 3-minute primer:

Democrats will launch a second attempt to remove Dormld Trump from office on Monday when they introduce articles of impeachment in the House. The Senate won’t reconvene until Jan. 19 and Senate Republican Leader Mitch McCormell said Friday that a trial can’t  begin before then uraess all 100 senators consent to it — an exceedingly unlikely development, as Trump retains allies among Republicans in the chamber.

Reports suggest Trump and a dwindling circle of advisers plan a defiant final week in office, according to people familiar with the matter. Trump is believed to be preparing at least one more round of pardons, and will try a final time to advance his administration’s effort to bring Big Tech to heel, though it isn’t clear what he may do.

What does all this mean for markets, probably not a great deal but politically between an impeachment movement and Trump’s censorship by social media political polarization is not going away anytime soon despite the Blue Wave,

The President elect is due to outline his stimulus plan on Thursday. Biden has guided that the price tag with be “high” and in the “trillions” and is expected to include plans for U5$2,000 stimulus checks, more generous unemployment assistance and enhanced aid to city and state governments.

Christine Lagarde’s first public appearances of the year (Mon 8 Weds) may provide clues for investors on the implications for monetary policy. We also get the latest ECB minutes on Thusday. Note, Fed Chair Powell speaks later that day taking part in the Princeton Economics webinar.

In the UK, GDP data for November will give an initial glimpse of the economic damage inflicted by a renewed lockdown that imposed that month to contain the coronavirus. Economists predict a sharp drop of 4.8X, the first contraction in seven months with with weakness concentrated in services activity, as pubs, restaurants, gyms and non-essential shops closed.

The US data focus will include CPI inflation (Wed), weekly jobless claims (Thu), retail sales (Fri) and the University of Michigan consumer sentiment (Fri). Retail sales probably fell for a third straight month. The auto and gasoline components likely rose, but spending at bars and restaurants probably plunged, due to COVID restrictions. Inflation is likely to move higher on gasoline price moves but outside of that component, price pressures remain quite benign, according to ING.

Finally, focusing on just the US, Goldman writes that the key economic data releases this week are the CPI report on Wednesday and the retail sales report on Friday. There are numerous speaking engagements from Fed officials this week, including Vice Chair Clarida on Wednesday and Chair Powell on Thursday.

There are no major economic data releases scheduled.

How Consumer Sovereignty and Entrepreneurship Work Together