The list of scheduled events in the final days of the year is relatively light, with just a few minor data releases and no Fedspeak scheduled. However, as Deutsche Bank notes, market participants will likely be focused on any incremental news from Washington, where in another last minute reversal, President Trump unexpectedly signed into law the covid stimulus package. The stimulus as currently tallied is about $900bn, with about $325bn in small business aid, an extension of federal unemployment benefit programs plus an additional $300 per week benefit, as well as $600 per person stimulus payments, just to name a few. Deutsche Bank has currently factored this $900bn stimulus package into its GDP forecast, which it sees rising 4.3% Q4/Q4 next year; in a note published overnight Goldman hiked its Q1 GDP forecast from 3.0% to 5.0% on the back of the fiscal deal.

On the data front, jobless claims on Thursday will be the highlight of the week, though ever-present issues seasonally adjusting the data around the holidays present some scope for potential volatility. Deutsche Bank expects initial claims (770k forecast vs. 803k previously) to improve some. However, the correlation between the change in claims and the growth in Covid cases across states remains high, suggesting that until fiscal stimulus actually begins to land in households’ pockets, the spread of the virus remains the primary determinant of any recovery in the labor market and will likely weigh on job gains in the December employment report.

The other releases on Wednesday are relatively minor and largely serve to sharpen forecasters’ estimates of current quarter GDP growth. Despite the dip in goods consumption in the November data, demand for goods remains elevated and should serve to drive the advanced goods trade balance (-$82bn vs -$80.3bn) slightly wider. Pending home sales (-0.5% vs -1.1%) are expected to continue to edge lower as the Covid-related surge in housing activity earlier in the year continues to fade. Finally, given the surge in Covid cases, the Chicago PMI (56.9 vs. 58.2) will likely dip further, mirroring the similar weakness seen in the consumer sentiment data. 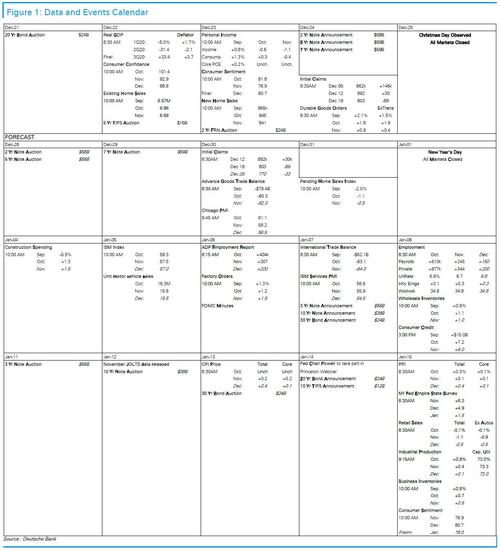 Looking at just the US, Goldman writes that the key economic data releases this week are the Chicago PMI on Wednesday and jobless claims on Thursday. There are no scheduled speaking engagements from Fed officials this week.

HHS Overturns Plan To Impose $14,000 Fee On Distilleries That Made Hand Sanitizer