Key Events This Week: All Eyes On CPI And The 10Y Auction

With the Biden stimulus narrative now behind us, earnings season effectively over, econ data entering the usual post payrolls lull and the Fed in their blackout period ahead of next week’s FOMC, it’s a relatively quiet week, however there are several key events that traders will be keeping a close eye on: the highlights this week will be US CPI (Wednesday) and PPI (Friday), the ECB meeting on Thursday and given the pretty sizeable volatility in US rates at the moment the success of a $58bn 3yr auction (tomorrow) and a $38bn 10yr auction (Wednesday) will also be very important. And with all eyes on inflation – and this week’s 10Y TSY auction – and Fed speakers offline, there won’t be much support (or market damage) from central planners this week, so volatility may be acute.

With regards to the ECB meeting the focus will be all about whether the council feel that the recent rise in bond yields is proportional to the improving global economic prospects or an unwelcoming tightening of financial conditions. As DB’s Jim Reid writes, economists expect them to emphasize their commitment to preserving favorable financing conditions, which encompasses sovereign yields, and its willingness to use the PEPP’s capacity and flexibility.

In terms of other releases to look out for this week, there will be industrial production numbers from the Euro Area and its major economies, a final reading of Euro Area GDP, along with February’s preliminary University of Michigan sentiment indicator for the US on Friday. See the day by day week ahead for more at the very end as usual 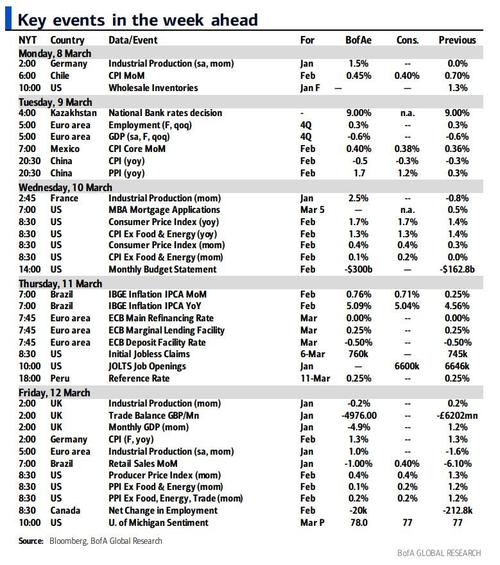 Finally, earnings season grinds to a crawl with just 3 companies from the S&P 500 and 50 STOXX 600 companies announcing results. The main highlights to look for are Deutsche Post and Continental tomorrow, while Wednesday brings releases from Adidas, Campbell Soup, Oracle, and Industria de Diseno Textil. On Thursday, the market will get results from Assicurazioni Generali, Ulta and then EssilorLuxottica on Friday.

Here is a day-by-day calendar of events, courtesy of Deutsche Bank

Finally, Goldman agrees that the key economic data release this week is the CPI report on Wednesday:

Reporter Emerald Robinson: Trump Is Focused on Primarying Those Who Didn’t Stand Behind Him – He’s “Out for Blood!” (VIDEO)

If America Splits Up, What Happens To The Nukes?