Key Events This Week: All Eyes On CPI

When summarizing the rising reflationary risks facing the market earlier today, JPM told clients to “keep an eye on Wednesday’s CPI number, specifically the core CPI number. An in-line or lower number may be the better outcome for equities.”

In his weekly preview, DB’s Jim Reid picks up on this and writes that while the week after payrolls tends to be a quieter week for data, January’s CPI print on Wednesday will be “most interesting given that inflationary pressures are popping up everywhere.”

Elsewhere there are various sentiment surveys from the US, along with industrial production results for many of Europe’s largest economies. 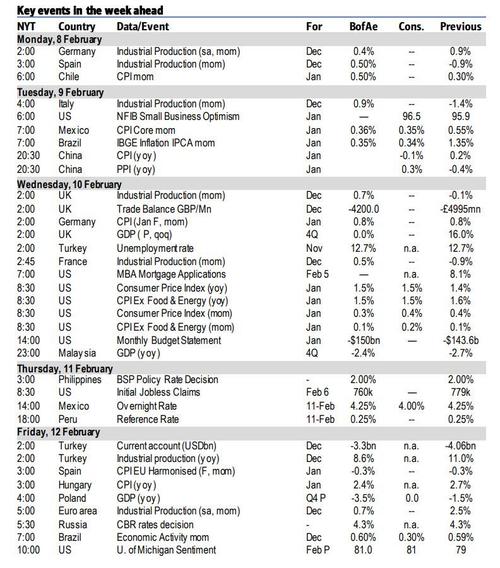 Additionally, while it is a relatively slow week for central banks, we expect to hear from both ECB President Lagarde (today) and Fed Chair Powell (Wednesday) this week. Finally, we are past the earnings season hump but with 82 S&P 500 and 84 Stoxx 600 companies reporting still. 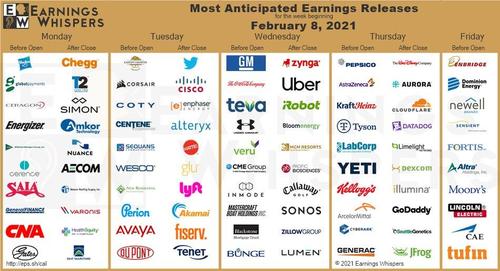 Elsewhere we could see Draghi become the next Italian PM this week as Bloomberg has reported overnight that Draghi has been able to secure support from parties across the political divide including from the Five Star Movement and Matteo Salvini’s League. Currently, it appears that only the far-right Brothers of Italy party may end up staying out of the coalition. Indicating the popular support for Draghi, La Repubblica published a poll yesterday that showed more than half of Italians would like Draghi to remain in power until 2023, when the next general election is due. In terms of the timetable ahead, Draghi will start a second round of talks with parties today and is expected to meet trade unions and business lobbies. If all goes well then Draghi could announce his cabinet picks this week before facing confidence votes in both houses of parliament.

Courtesy of Deutsche Bank here is a day-by-day calendar of global events:

Finally, focusing on just the US, Goldman also agrees that the key economic data releases this week will be the CPI report on Wednesday, while the jobless claims report on Thursday will also be closely watched for support for the Biden stimulus package. There are two speaking engagements from Fed officials this week, including Chair Powell on Wednesday.