With the major central bank meetings now out of the way, market attention over the week ahead will likely turn back to the pace of the economic recovery, with a focus on the release of the flash PMIs for March (Wednesday), as well as the potential for increased pandemic restrictions as the global case count has begun to rise again.

As DB’s Jim Reid notes, other events in focus will include Fed Chair Powell and US Treasury Secretary Yellen testifying before congressional committees (Tuesday and Wednesday), Powell speaking at a BIS event today at 9am, as well as an EU leaders’ summit at the end of the week, where the pandemic and the vaccination programme will top the agenda.

This week’s auctions will be a good litmus test of how comfortable markets are with bond market risk at the moment. We have $60 billion 2-year tomorrow, $61 billion 5-year (Wednesday) and $62 billion 7-year notes (Thursday) to at least monitor. The bad 7-year auction at a similar time last month was a bit of a warning sign for demand at the then prevailing levels so this might be one to watch.

In more specific detail on the PMIs, in recent months there’s been a divergence in the indicators, with Europe lagging behind the US, and the services sector lagging manufacturing. Indeed, the Euro Area composite PMI has been beneath the 50- mark for 4 successive months, whereas the US composite PMI rose to 59.5 in February, its highest level since August 2014. With restrictions beginning to tighten in Europe again whilst the stimulus checks arrive in the US, it’ll be interesting to see if this divergence widens further over the coming weeks and months. Also watch out for the Ifo business climate indicator from Germany (Friday). 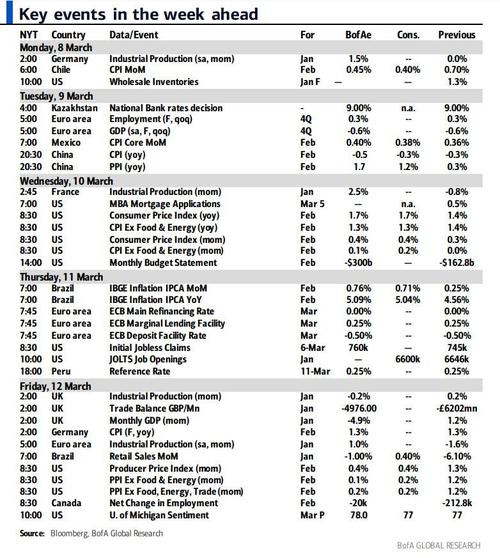 From central banks, the main highlight will be Fed Chair Powell’s appearance tomorrow and Wednesday before the House Financial Services Committee and the Senate Banking Committee on the CARES Act. He’ll be doing this alongside Treasury Secretary Janet Yellen. Markets will be paying close attention to see if Powell has any further commentary on the Fed’s reaction function, particularly since their dot plot last week showed a majority of the FOMC keeping rates on holding through the end of 2023, even as they projected above-target inflation. Also of interest will be if Powell has any comments on the recent rise in yields, with those on 10yr US Treasuries rising to their highest levels since January 2020 in the week just gone.

Towards the end of the week, EU leaders will be gathering in Brussels for their latest summit, in which Covid-19 is expected to feature heavily on the agenda. The EU have been criticised for the slow pace of their vaccination programme, which has lagged behind the UK and the US, and a number of countries temporarily suspended the AstraZeneca vaccine following reports of blood clots last week. Commission President von der Leyen even refused to rule out using Article 122, which would in theory allow the EU to take control of the production and distribution of vaccines, potentially placing export controls on vaccines that had been destined elsewhere such as the UK. Separately on the pandemic, German Chancellor Merkel will be speaking with state leaders today as they decide their next steps to deal with rising caseloads. The country’s lockdown restrictions currently expire on March 28. Stricter restrictions are predicted with Bloomberg last night suggesting another 4-week extension to April 18th being likely. Across the other side of Atlantic, Massachusetts said that it will be easing restrictions further today with indoor and outdoor stadiums, including Fenway Park, allowed to reopen at 12% capacity, and the numbers allowed at public and private gatherings will also increase.

Courtesy of Deutsche Bank, here is a day by day week ahead calendar:

Finally, looking at just the US, Goldman writes that the key economic data releases this week are the durable goods report on Wednesday, the Q4 GDP revision on Thursday, and core PCE inflation on Friday. There are numerous speaking engagements from Fed officials this week, including Powell’s appearances before the House Financial Services Committee on Tuesday and the Senate Banking Committee on Wednesday.

Goldman’s Clients Are Freaking Out About A Stock Bubble: Here Is The Bank’s Response