‘King Of SPACs’ Warns “Bunch Of Busted IPOs/Mergers” Ahead

A little less than a month ago, Chamath Palihapitiya was crowned “The King of SPACs” by Bloomberg… 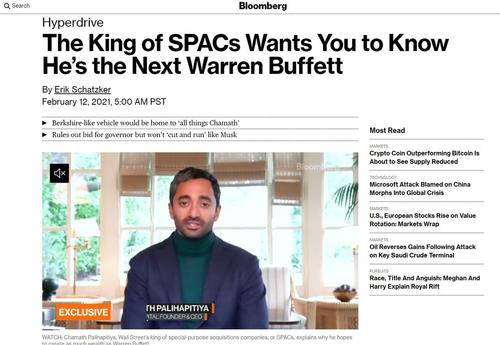 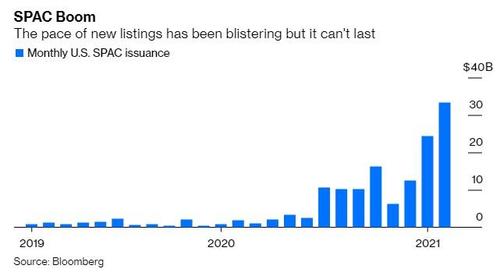 This weekend, the billionaire VC faced some tough realities, noting that “the point is that this stuff is hard and I, like you, am not perfect and trying to learn, be resilient and keep fighting. Markets, in the near term, are volatile and unforgiving but they ultimately always direct gains to valuable companies doing valuable things”:

As the entire SPAC/IPO market tumbled into bear market territory… 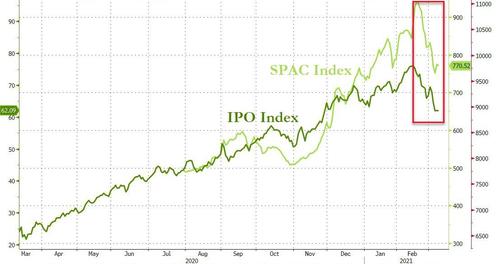 During his podcast on Saturday, Palihapitiya warned that:

“The SPAC market has taken a real beating.”

“If you have one or two more months of this where all of a sudden bonds look better… you’ll have a bunch of busted IPOs or mergers.”

As Bloomberg reports, rising bond yields have been unkind to growth stocks. Their impact on the special purpose acquisition companies has been downright cruel. The SPAC boom has become the Spacpocalypse. Nobody should be surprised.

Dozens of SPACs are now trading below the $10 price at which they sold shares. That’s more like how things should be. In a “normal” market, SPACs would sell for roughly the per-share value of the cash they hold, at least until they’ve announced a deal. Yet until recently many SPACs were immediately trading at a large premium to their cash holdings. That didn’t make much sense. Was it really likely they’d all find attractively priced deals that would justify paying so much?

And hedge funds are starting to take advantage of this trend by shorting SPACs:

“We’re finding ways to make money on the short side in that space, and I think others probably are too.”

Bloomberg concludes: The SPAC market has gone through cooling off periods before. The good news is that there’s less risk of losing money with SPACs trading closer to the value of the cash they hold. However, wannabe Wolfs of Wall Street still hoping to launch theirs could find they’re too late. The party’s over, at least for now.

Biden Administration And Iran: Secret Deals And Appeasement Back On The Table?

The Year In Which Comforting American Myths Were Ravaged