The small nation of New Zealand, with its highly experimental central bank has been increasingly in the news lately, and one day after we reported that the kiwi tumbled after the government targeted housing speculators to burst a “dangerous” bubble (giving the central bank leeway to keep rates lower for longer and depressing the currency), on Wednesday it was the turn of New Zealand 10Y Yields to plunge, after a failed QE operation saw 10Y NZ bonds slide by a whopping 17bps dragging the NZDUSD further from about 0.7170 this time yesterday to about 0.6870 this morning.

The chaos broke out early on Wednesday local time when the RBNZ announced that its QE buying operation failed to find enough offers to meet target of NZ$220MM buying just NZ$152MM. The shortfall came from the Apr 2025 issue, where of the NZ$92MM in offers, just NZ$52m accepted vs target NZ$120MM/ 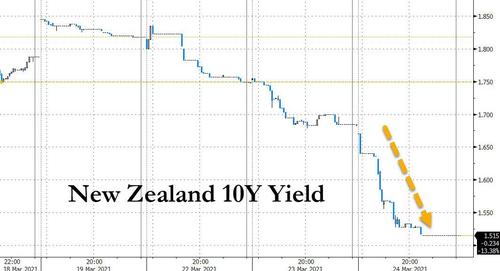 The news sent N.Z. 10-year bond yields fall as much as 17bps, with short-end rate hike pricing continuing to unravel in a continuation of Tuesday’s move after fresh measures to cool rising housing prices were introduced. There are now just around 20bps hikes priced by the end of 2022 versus 35bps on Monday

The AUDUSD was dragged down in sympathy with it. New plans to curb property markets by PM Ardern may have also been a contributing factor, but as ING muses, “maybe investors are becoming more reluctant to part with bonds at these yields?”

Micro-Caps Are Soaring As GameStop Collapses