Having mastered the fields of viral epidemiology and presidential polling, JPM quant Marko Kolanovic is set to conquer yet another “cross-asset”: commodities.

Two days after Dylan Grice published an article “The Stage is Set for a Bull Market in Oil“, with various commodities around the world soaring, and the price of oil up a stunning 64% since November, today Marko Kolanovic made a bold prediction – that the world has entered a new commodity supercycle:

The croatian quant first looks at history to answer “what drove the last supercycle” – according to him, “on the upswing, the most important driver was the economic rise of China (and EMs more broadly). USD was weakening and asset managers increasingly added commodity exposure to diversify portfolios.” Then the 2008 global recession hit, coupled with further slowdown in Europe (2011) and China (2015) which sent commodities lower, defining the 12 year down cycle whose last leg “was marked by trade wars the ensuing global manufacturing recession, and the disastrous pandemic that sent oil prices into negative territory for the first time ever.” This is summarized in the chart below. 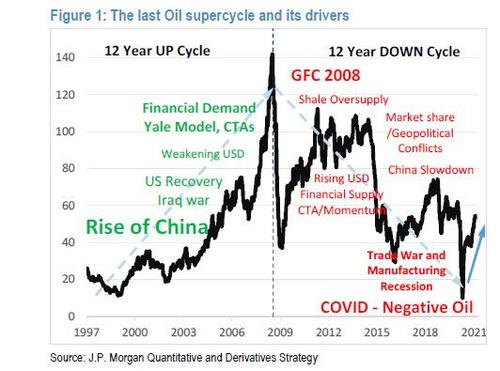 Well, according to the JPM quant, the downcycle is now over, and “the new commodity upswing, and in particular Oil up cycle, has started” driven by the following factors: 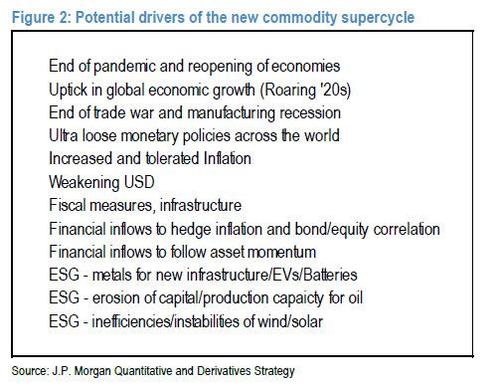 Of these, Kolanovic says that the upcycle will mostly be a story of:

What he means by the last bullet is that as a result of dramatic capex curbs in recent years, with capital instead flowing to various pet ESG projects, there is not nearly enough capacity to meet future demands and the immediate outcome will be far higher prices.

It’s not just the fundamental factors that form the basis for JPM’s bold call: the bank also believes that the coming years will see a substantial repurposing of financial flows which have “an increasing role in asset pricing (e.g. vs. fundamentals)” is a consequence of “the electronification of liquidity provision, increased use of leverage, and rise of systematic trading strategies and related flows.”

It is these increasingly fast and furious flows that “exacerbated the size and velocity of price moves both in commodities and related equities” during the last downturn, and these same financial flows “can have a similar impact on prices in the up cycle.”

Marko then discuss some of the financial flows that he believes will impact commodity and related equity prices: we have excerpted his view on some of the key ones:

Inflation hedging: The past decade was marked by low growth and low inflation. Bonds, bond proxies and secular growth stocks were in a bull market, while commodities, value and cyclical stocks performed poorly. Kolanovic believes that the tide on yields and inflation is turning, which will pose “a major risk to multi-asset portfolios” and in light of the consensus view that commodities are the best way to hedge rising inflation, the JPM quant expects “these multi-asset portfolios to add commodity and commodity equity exposure to hedge inflation.”

Bond-equity correlation hedging: Claiming that “bond-equity correlation is a critical input into portfolio construction (selection of assets, weights, leverage)” the quant found that Bond-equity correlation shifted regimes when the last supercycle started in 1997 and when central bank actions started intervening in bond markets to backstop equity risk. Coincidentally, Kolanovic notes, “with the end of the commodity supercycle, short-term rates have dropped globally to zero, and the ability of CBs to reinforce the bond-equity relationship without driving inflation has diminished.” So as the world recovers from Covid on the back of a “monetary and fiscal engineered recovery”, JPMorgan expects volatility to decline and inflation to increase, “delivering a 1-2 punch to bond-equity  correlation.” This means that energy equities “could present a good hedge for bond-equity correlation – they often deliver a yield (like bonds) but also hedge the inflation and bond-equity correlation risk.” Incidentally, Exxon still offers a 7% dividend yield despite oil prices being high enough to where the risk of the dividend being canceled is virtually gone.

Quants and Momentum Investing: In a market where algos and trend-followers have emerged as one of the dominant price-setting forces, it is hardly a surprise that the JPM quant focuses on their influence as the driver behind a commodity supercycle. Indeed, he writes that after “CTAs played significant role in the 2014 oil price downturn” more recently, “CTA funds have been adding Energy exposure. The reason is that 12-month momentum turned positive on Oil, and going forward signals will remain solidly positive.” And since vol-control funds are some of the dumbest money around and their actions can be anticipated well in advance, JPM notes that “a further decline in volatility will likely result in larger and more stable cross-asset quant allocations. A larger momentum impact may affect Energy equities, which is the only sector that still has a strongly negative momentum signal and is hence heavily shorted in the context of factor investing.” That, JPMorgan believes, will “change in mid-March, when the momentum signal for energy equities turns  positive” which may be a hint to the redditors out there: if you want to squeeze the systematic shorts, do it where it hurts and buy some energy stocks to crush the CTAs. You have about a month to do so because JPM’s model momentum factor “will need to rebalance in March by closing ~20% of its allocation to Energy equity shorts, and adding ~2% to energy longs, for a ~22% net buying in Energy.”

What is the quantitative significance of these flows? Kolanovic calculates that if one roughly assumes that there is about ~$1Tr in equity long-short quant funds and that half of these funds are not sector neutralized, “the flows could be quite significant, roughly $20-$30bn.” As shown in the chart below, the ratio of energy shares shorted vs all other S&P 500 shares shorted, closely followed the commodity supercycle. Remarkably, most recently the number of shares shorted for energy was 4 times the S&P 500 average (note that given the decline of the sector’s weight, energy share prices declined, and the effective $ amount shorted was only 2 times larger). In other words, one doesn’t even need to squeeze the shorts: come March – absent some major new crisis – as a result of broader market technicals the prevailing shorts will close them out on their own and go long. 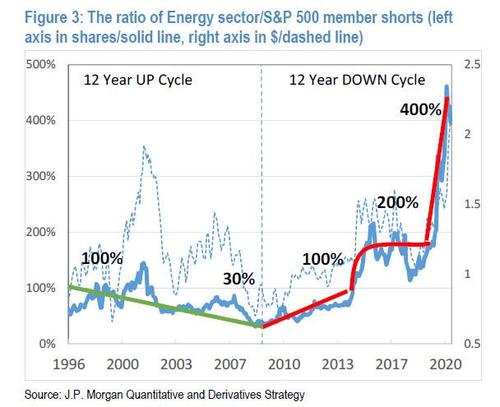 Another “flow factor” behind the “supercycle” is rotation by discretionary funds and retail: In the period from 2010 to 2015, the Energy sector had a 10.6% allocation in conventional equity portfolios. Since then, this has declined to a 3.1% weight currently (Figure 4). The largest decline was in active allocations, which declined from 7% to 1.5% (while passive allocations decreased from 3.6% to 1.8%), which is understandable – investors dumped “dead stocks” to chase growth and momentum, but the tide is now turning, and “any retracement of this decline, on a US equity fund asset base of ~$14T would result in significant inflows and re-pricing.” According to Kolanovic, as economies reopen, inflation moves higher, and yield curves steepen, active funds are expected to first close cyclical shorts, and then rotate from long secular growth towards value and cyclicals. His next point is critical: given that equity assets significantly increased over the last 10 years, and the energy sector significantly decreased, even a small rotation could produce an outsized move. 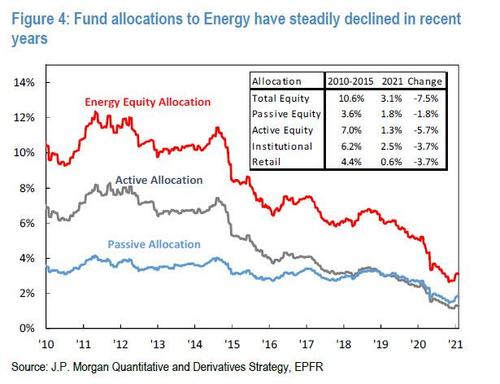 Finally, retail investors also reduced energy equity allocation from 4.4% to only 0.6% currently. However, as the quant notes, “given the increased retail activity and interest in stocks that are volatile, have high short interest, are smaller in size and have thematic news/social media coverage, the sector will likely also be of interest to retail investors.”

By which he means that we may soon have hedge funds, pardon, reddit mods and WSB participants drafting long posts discussing the relative merits of energy as the next sector to go long, and creating a critical mass of buyers which then cascades across the ranks of market participants, from ultra-fast HFTs, to fast momentum and trend-followers, to slow ETFs and eventually ultra slow pension fund money rushing to buy energy stocks and oil.