Having repeatedly previewed the recent quant rebalance into energy stocks, which he used as a basis to push JPMorgan clients into what he now views is an oil/commodity supercycle, JPMorgan’s Marko Kolanovic has likely had to field quiet a few (angry) investor calls in recent days, with oil plunging last week and dragging down energy names with it before its modest rebound this week.

So has the recent wobble, which came at the worst possible time for JPM’s “quant rebalance into energy” call deflated some of the Croat quant’s confidence that commodities are only going up, up, up?

Not at all, and as he writes in his latest “Market and Volatility Commentary” note, despite repeatedly highlighting his long-term positive view on Oil and energy stocks and the view that a supercycle in energy commodities may be under way, “over the past week, the Oil market exhibited unusual volatility, particularly with selloffs last Thursday and yesterday.”

So what caused this selling just as JPM had predicted aggressive buying from rebalancing quants? Apparently it was other quants, or rather trend-followers dumping: as Kolanovic “explains”, a significant part of this selling came from systematic investors, namely CTAs.

Over the past years we have studied CTA trading strategies and the signals they employ. There are, broadly speaking, 3 factors that drive positioning of a CTA strategy:

In the case of Oil, going into the last Thursday’s selloff, Kolanovic writes that momentum signals for commodities were positive, however on Thursday “only short-term momentum was breached (e.g., 20-day MA), which has relatively low weight compared with other lookbacks. In Tuesday’s selloff, another short-term signal was breached as well (e.g., 50-day MA). One should note that medium- and long-term signals (e.g., 4m, 6m, 12m, 200-day MA, etc.) are all still positive and would imply that CTAs should be still heavily long Oil. However, they are not.” Well, oops.

Never seeing a market signal he can’t goal seek to fit his narrative, Kolanovic then effectively says that quant selling is bullish, i.e., “these positions have been substantially reduced, which is in our view a positive for oil prices going forward.”

But why were CTAs selling if the signal going into Thursday were so positive, and with most of the other signals are still positive (i.e., over 80% of weighted average signals based on historical regressions)?

The reason, according to JPM quant, is the stop-loss signal that got triggered both on Thursday (and again yesterday). “Stop loss ensures that a potential turning point in asset price does not result in catastrophic losses” or as Kolanovic explains:

In our books on CTA strategies, we explained why stop losses are critical for momentum strategies, and how they don’t improve return profiles, but significantly reduce the kurtosis of returns – a critical parameter of any momentum strategy. Stop loss signals are usually set along the lines of a 1-day 5% drop, or 1-week 10% drop, or anything in between (e.g., 3-day 6% drop, etc.). A broad of range of these stoploss signals were breached for Oil last week, resulting in CTAs selling the bulk of their oil positions. In addition to stop loss, increased volatility reduced position on account of volatility targeting (philosophically very similar to stop-loss), and vol-targeting adjustments usually last 3-5 days.

Once the stop loss clears on a rolling basis – and that can happen any day now – CTAs will be still left with a largely positive signal for oil, and the Croat believes that “they will re-engage their long asset exposure”:

We believe that will result in an upward move in oil prices (all else equal). In addition to CTA selling, intraday price action indicates a large short gamma position on round numbers such as WTI at 60, 59, 58, which were breached multiple times up and down. Fast moves through option strikes helped trigger CTA selling. However, option gamma cuts both way, and will also result in a faster move up as these strikes are crossed.

Perhaps he is right… but there is one catalyst listed by Kolanovic which would be especially bullish for oil: if the Ever Given ship currently blocking the Suez Canal happens to break, blocking this critical waterway for an indefinite period of time and sending the price of oil exploding higher.

As Kolanovic puts it, “another interesting development of this week was the blocking of the Suez Canal. While we believe and hope the situation will get resolved shortly, there are some risks of the ship breaking.” In such a scenario which would be a wet dream for Saudi Arabia, “the canal would be blocked for an extended period of time, which could result in significant disruptions to global trade, skyrocketing shipping rates, further increase of energy commodities, and an uptick in global inflation.”

How does Kolanovic trade this? How else – by going long his favorite commodity sector: “This risk can be hedged by buying Oil and associated equities (e.g., energy, shipping, etc.).”

As an aside, and considering who would benefit the most from triple digit oil prices one wonders if MbS had something to do with a ship bigger than the Eiffel Tower getting stuck almost perpendicular… 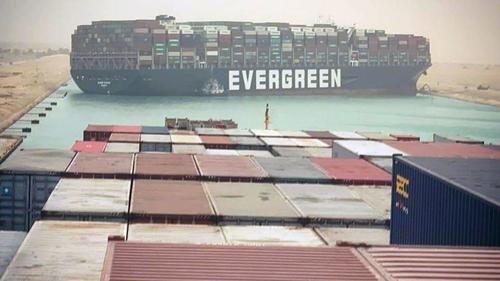 … in one of the world’s most closely supervised waterways.

Is The End Of The Value Trade Near?