Kuroda Put: The BOJ Just Bought The Most Stocks In 2021 To Halt Topix Rout

It seems like it was just last week when the BOJ – faced with mounting criticism from Japanese politicians that it had permanently broken the bond and stock market and had absolutely no exit strategy to its asinine market supporting strategy – tried to reassure the market that it would rely far less on buying of ETFs and JREITs (read: domestic stocks), when it abandoned its ¥6tn ($55bn) annual target for ETF purchases (it did however retain the ¥12tn upper limit to what it can purchase annually) and said it would stop buying those ETFs tracking the Nikkei 225 or Nikkei 400. Oh wait, it was last week.

However, as we also said last week, by warning of its inevitable pullback from propping up the stock market, the BOJ also directly invited the “stock vigilantes” to start dumping stocks in a process which, we said, would paradoxically lead to the BOJ quickly being dragged right back in to propping up the stock market. All that was need was a spark.

Which brings us to today, when Japanese stocks tumbled (alongside Chinese stocks) with the Topix – the only index which the BOJ is supposedly focusing on at this point – suffering its steepest drop in a month, as growing virus cases overseas damped investor sentiment and encouraged investors to keep selling shares. 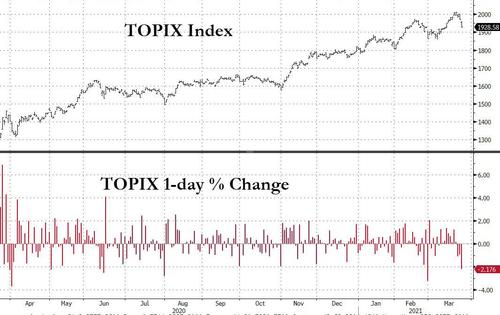 And with Japanese stocks tumbling, guess who emerged from hiding to protect frail little Mrs. Watanabe and make sure her losses aren’t too big. Why the BOJ of course.

Because one week after Kuroda desperately tried to talk down the market’s reliance on BOJ backstop, he showed just how brittle the entire system is when the BOJ bought a total of 71.3BN yen of (Mostly Topix-linked) ETFs today, the largest amount on a single day and the first change in buying pattern this year, after the BOJ bought 51.3BN yen on three occasions in March, once in Feb. and four times in Jan. Put in context, today’s purchase which coincided with a 2.2% drop in the Topix was 39% higher compared to the 50.1BN yen of ETFs purchased on Monday,when the Topix fell 1.1% at the close of morning session in Tokyo.

As shown in the chart below, the last time the central bank purchased 71.3b yen was Dec. 30. 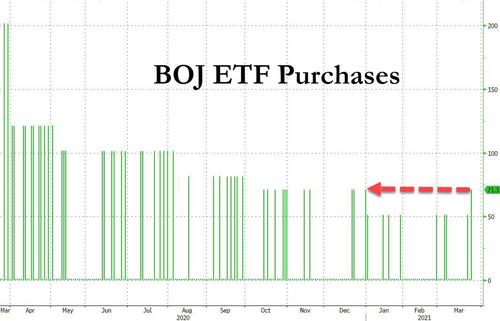 So with the latest BOJ intervention we now know that the BOJ buys about 50BN in ETFs on days when the Topix drops around 1%, and bumps that total up to ~70BN when the Topix suffers s 2% drop or more.

In short, we now know the sensitivity of the Kuroda Put. We also know the strike price – as Bloomberg calculates, the largest drop that has not led to the BOJ buying remains the 0.89% decline on Feb. 24. What is remarkable is that the Kuroda put was much more sensitive in 2020: prior to this year, the BOJ typically bought if the Topix fell more than 0.5% in the morning session.

In short, every time stocks drop around 1%, expect the BOJ to aggressively run and bailout stocks, even after last week’s BOJ statement which sought to downplay the market’s reliance on Kuroda’s ETF purchases. The question is just how big the crash will be if/when the Topix crashes 5% or more… and the BOJ does nothing. That’s when the real panic begins.

Far Left Activist John Sullivan from Utah Who Was Arrested for Storming the US Capitol Is Released without Charges — Organized Antifa Event in Area at Same Time as “Stop the Steal” Rally!