As global COVID-19 cases top 90MM, California is seeing its hospital capacity squeezed even further – Gov Gavin Newsom just declared that COVID-linked hospital occupancy was up 6% over the past week – LA has just announced that Dodgers Stadium, which has heretofore served as one of the biggest COVID testing sites in the country, will soon be converted to a vaccine distribution center.

Nearly 2K federal staff are deploying to help the state deal with the surge in COVID cases, hospitalizations and deaths. Some will help wind down testing operations at Dodgers Stadium, which are set to end Monday, according to the LA Times. 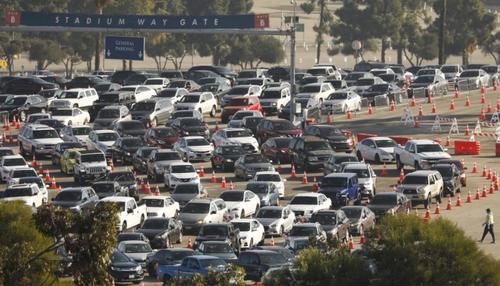 The site will then be converted to focus on vaccinating patients. Once the vaccination center is up and running, officials hope to vaccinate up to 12K people each day.

City and county officials are else ceasing testing at the Veterans Affairs Lot 15 site near Jackie Robinson Stadium before they shift personnel, equipment and other resources to vaccine distribution.

“Vaccines are the surest route to defeating this virus and charting a course to recovery, so the city, county, and our entire team are putting our best resources on the field to get Angelenos vaccinated as quickly, safely, and efficiently as possible,” Garcetti said in the release.

While SoCal’s testing capacity will temporarily take a hit, ultimately, the stadium will allow California to triple its vaccination capacity.

Of course, this increased capacity will do little if people don’t submit to receiving the vaccine. The rollout also has been hampered by reluctance from some front-line healthcare workers to take it. Roughly 20% to 40% of LA County’s front-line workers who were offered the vaccine have declined to take it according to the LAT.

In other news involving both the coronavirus and the state of California, three gorillas at the San Diego Zoo have tested positive, according to the Department of Agriculture. Samples from several gorillas at the zoo were taken after two started coughing and displaying other suspicious symptoms.

Covid: Where Are the Courageous Religious Leaders?