Authored by Drew Van Voorhis via The Epoch Times,

The fate of about 1,800 Orange County inmates remains unclear as legal proceedings continue into whether the prisoners should be released amidst an ongoing pandemic. 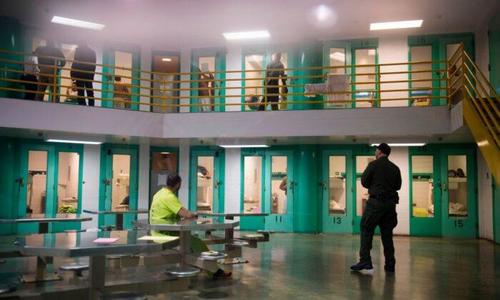 During a Jan. 8 court hearing, the Orange County Sheriff’s Department (OCSD) answered questions regarding its plans to reduce a CCP (Chinese Communist Party) virus outbreak among its prison populations. The hearing ultimately resulted in the court ordering future hearings to obtain more information.

The case began last year, when Sheriff Don Barnes received a Dec. 11 court order requiring county jails to reduce populations by 50 percent. It was a move Barnes has warned could result in large consequences for the community.

Barnes appealed the court order, but was denied Dec. 29. He filed another appeal, which led to the Jan. 8 hearing, overseen by Superior Court Judge Peter J. Wilson.

During the hearing, Wilson asked county attorneys a list of pre-written questions about the precautions the department has taken to reduce the outbreak. Inquires related to jail inspections, available prison footage, and more.

OCSD spokesman Sgt. Dennis Brecker told The Epoch Times via email that the jail’s COVID-19 numbers reduced by hundreds of cases Jan. 8 due to a backlog of tests being processed.

“Our [positive case] numbers in the jail just went down by the hundreds, now at 465 [cases],” Breckner said. Just the day before, the department was reporting 1,062 cases.

He continued, “The website is up to date and the explanation for the drastic decrease was simply that the number of tests being administered created a backlog for [Orange County Health Care Agency] and they are now catching up.  We anticipate the number continuing on a downward trend because of the mitigation efforts that we have put in place.”

During the hearing, Kendrick offered to bring in a person the ACLU has worked with before as a court-appointed expert to go through the 34 boxes of inmate files the sheriff’s department transferred to Wilson to review on who to safely release, based on individual inmates’ records.

Watson noted large disagreement with this.

“I just want the record to be clear that we, on behalf of the sheriff’s department, strongly object to the appointment of any expert to perform the sheriff’s statutory duties,” Watson said.

“We have not been given an opportunity to present current evidence on the ground, despite our repeated requests.”

The court adjourned with the next court hearing being held January 19, where there will likely be more experts to testify.

Barnes issued a statement on the Jan. 8 hearing.

“The court is holding additional hearings to obtain information from experts regarding the conditions of the jail,” he said.

“We will continue to highlight our efforts to mitigate COVID-19 in our jails and keep dangerous inmates out of the community,” he noted.

More Good News On COVID Hospitalizations In The Northeast

Opening The CIA’s Can Of Worms