Leon Black will step down as CEO of Apollo Global Management, the giant private equity company he founded in 1990 and built into a $433 billion financial powerhouse that has become a big lender to corporate America. The announcement came as Apollo revealed the conclusion of a review by law firm Dechert into Black’s relationship with the late paedophile Jeffrey Epstein, which reportedly “cleared” Black and Apollo of any “involvement in criminal activities” with Epstein.

Over the past year and a half, Apollo CEO and founder Leon Black had been caught in a web of allegations that he was “too close” to suicided and disgraced pedophile Jeffrey Epstein after it emerged Black had paid Epstein $158 million after he was released from jail. And while Black published a letter in which he admitted that “it was a terrilble mistake” to associated with Epstein and “like many people I respected, I decided to give Epstein a second chance,” Black said last October, it wasn’t nearly enough as some asset managers froze their new capital allocations to Apollo. It eventually prompted Apollo to hire Dechert to conduct an “independent review” of Black’s dealings with Epstein to clear Black’s – and Apollo’s – name.

Well, today after the close, Apollo said the Conflicts Committee completed its independent review of Black’s previous professional relationship with Jeffrey Epstein and publicly released the report which found no evidence that Mr. Black was involved in the criminal activities of the late Epstein, who was indicted in 2019 on federal sex-trafficking charges involving underage girls.

Among the key findings of the Dechert report:

Black “believed, and witnesses generally agreed, that Epstein provided advice that conferred more than $1 billion and as much as $2 billion or more” in tax savings, the report states, which – needless to say – is ridiculous for a person who was already surrounded by the biggest tax experts on earth who also happened to be Black’s employees.

The report supports Black’s contention that he paid Epstein a fee he believed was roughly equivalent to 5% of the value that late financier generated on an after-tax basis, according to the WSJ. It describes the two men’s relationship deteriorating beginning in 2016 after a fee dispute…. even though Black’s last payment to Epstein was made in April 2017.

Black also asked employees of his family office; attorneys at law firm Paul, Weiss, Rifkind, Wharton & Garrison LLP; and other outside accountants, lawyers and tax professionals to vet and challenge Epstein’s advice when it was given, the report states.

“In short, there is no question that Epstein performed substantive work for Black and that Black genuinely believed that Epstein was extremely smart, capable, and saved him substantial amounts of money,” the report says.

And yet, while superficially all that is is great… everything about this announcement stinks. Like for example, why was Black ousted as a result of an “attempted boardroom coup” with the NYT writing that Black “engaged in a brief power struggle this weekend over control of the firm, a rift that opened up after an inquiry revealed that one founder — Apollo’s chief executive and chairman, Leon Black — had paid $150 million to the convicted sex offender Jeffrey Epstein.”

Needless to say, the so-called “acquittal” doesn’t explain why Black is set to retire as CEO effective on or before July 31 (but retain the Chairman title), and is to be replaced with Marc Rowan, a man who last July Apollo said would take a step back from his day-to-day responsibilities and embark on a “semisabatical.” 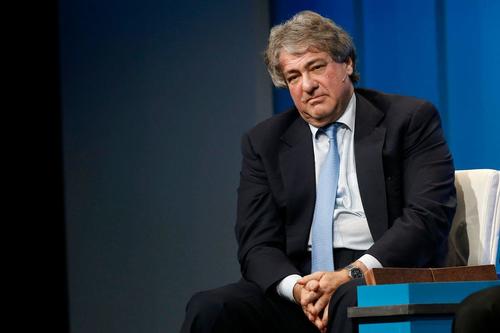 Additionally, as the WSJ also reports, Black paid Epstein “a total of $148 million, plus a $10 million donation to his charity—far more than was previously known.”

Dechert found the fees that the billionaire had paid Epstein were for legitimate advice on trust- and estate-tax planning that proved to be of significant value to Mr. Black and his family

The $150M figure means Leon Black was almost singlehandedly supporting Epstein for years before he died.

This news is a direct result of 18+ months of dogged reporting by @nytimes @MattGoldstein26, whose stories led Apollo to launch an outside review of Black’s ties to Epstein.

In a letter to Apollo’s fund investors, Black wrote that he would cede the role of CEO to co-founder Marc Rowan on or before his 70th birthday on July 31 while retaining the role of chairman. In the letter, a copy of which was viewed by the Journal, Black detailed other governance changes he is recommending to the board, including the appointment of more independent directors and the elimination of Apollo’s dual-class share structure.

Black also pledged to donate $200 million of his family’s money to women’s initiatives; Black also recommended other governance changes, including adopting a “one share, one vote” structure and eliminating the supervoting shares held by the firm’s founders. He also proposed augmenting the board so that the majority of directors are independent.

In his letter, Mr. Black added, “It is important to emphasize that both Apollo and I condemn Mr. Epstein’s reprehensible conduct in the strongest possible terms, and, as I have previously stated, I deeply regret having had any involvement with Mr. Epstein.”

“I am keenly aware that Apollo must continue to innovate and improve its corporate governance processes and focus on creating an enduring world-class financial institution with a best-in-class governance structure,” Mr. Black wrote in the letter.

And while the stock was clearly satisfied with the report clearing both Apollo and Epstein of “any involvement in criminal activities at any time”, one can’t help but wonder what prompted Black’s departure from the PE giant that he founded. Sadly, as with so many other things, it appears we will never really know.

Adding to the puzzle, the ascension of Rowan, 58 years old, was – as the WSJ notes, “in some ways unexpected. Apollo said in July that he would take a step back from his day-to-day responsibilities and embark on a “semisabatical.” To some insiders, that seemed to pave the way for co-founder Josh Harris —who has for years overseen the firm’s day-to-day operations and has spent the past few years trying to institutionalize and revamp what some had described as a cutthroat culture—to take the top executive spot.”

Harris will remain a member of Apollo’s board and executive committee and will “continue to focus on expanding our global search for investor returns,” Mr. Black told investors.

How Markets Turn Lousy Products into Great Ones