(Update 1040am ET): well, we have cross above the level where the selling in 5Y TSYs will become self-reinforcing. Buyers better emerge here or the Fed is about to have a very, very bad day. 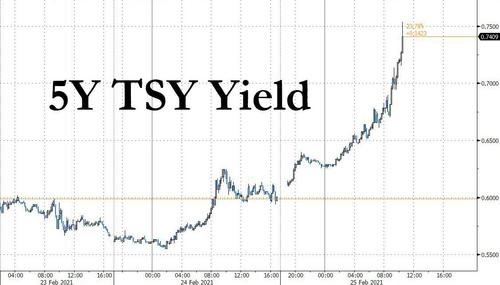 With the stunned world watching with bated breath every tick move higher in 10Y yields, Mizuho bond strategist and trader Peter Chatwell writes in and points out that “5Y UST now leading the sell off. This is a warning signal that the rates sell off is going beyond a repricing towards a convexity move. This is something which we think is inconsistent with Fed dovish rhetoric on rates.”

As Chatwell ominously adds, we are “suddenly just 5bp below the 0.75% 5Y UST inflection point. If the sell off extends beyond there, we think US stocks and credit spreads will suffer.”

Alas, since this email has come in, the 5Y has blown out even higher and was last trading at 0.7441%, less than 1 basis point away from what may be convexity disaster… 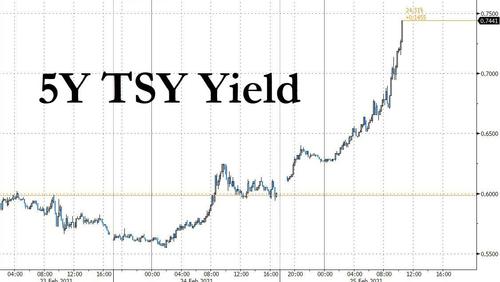 … meanwhile, the 10Y us trading at 1.4905%, also 1 basis point from the critical 1.50% level that Nomura predicted would lead to a sharp selloff in risk assets. 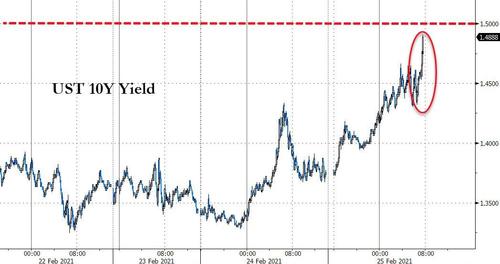 Today’s pukefest accelerated despite what at least superficially appeared to be some good news for convexity flows yesterday, when swap spreads collapsed suggesting the gamma feedback loop in rates was ending.

Turns it out wasn’t.

For those unfamiliar with convexity hedging/flows and why it is a potentially disastrous feedback loop where selling begets more selling, think stock gamma only to the downside. Here is a quick primer from Bloomberg:

There comes a point in any big selloff in Treasury bonds when the move becomes so pronounced that it starts to feed on itself. Increases in yields force a crucial group of investors to sell Treasuries, which in turn leads to further increases in yields. Two months into this rout, that moment appears to have arrived, and it’s beginning to send shudders throughout all corners of U.S. financial markets.

The forced sellers are investors in the $7 trillion mortgage-backed bond market. Their problem is that when Treasury yields — which strongly influence home-loan rates — suddenly rise sharply, many Americans lose interest in refinancing their old mortgages. A reduced stream of refinancings means mortgage-bond investors are left waiting for longer to collect payments on their investments. The longer the wait, the more financial pain they feel as they watch market rates climb higher without being able to take advantage of them.

Their answer: unload the Treasury bonds they hold with long maturities or adjust derivatives positions — a phenomenon known as convexity hedging — to compensate for the unexpected jump in duration on their mortgage portfolios. The extra selling just as the market is already weakening has a history of exacerbating upward moves in Treasury yields — including during major “convexity events” in 1994 and 2003.

To be sure, with the Fed buying $50BN in MBS every month, it does provide a buffer to an even more acute gamma selloff. Even so, waves of mortgage investors adjusting their portfolios could still have an outsized impact on rates that reverberates across asset classes, market watchers say.

“Everyone — except the Fed — is a convexity hedger at some point because as your portfolio keeps getting longer with the rise in rates it will become increasingly painful,” said Joshua Younger, head of U.S. interest-rate derivatives strategy at JPMorgan Chase & Co. “There’s more flexibility now for those who need to hedge so rates rising won’t cause the train to go off the rails. But even a train on the rails can be difficult to stop.”

Bringing this back full circle, according to Mizuho a critical convexity selling threshold is at 0.75% in the 5Y. We are about to find out if he is right.