I (Nick) recently picked up a February 1943 copy of The Magazine of Wall Street (the pre-eminent capital markets magazine of the time) on eBay, thinking that there might be some useful analogies between then and now. If nothing else, I reasoned, US expenditures on World War II and the Pandemic Recession are roughly the same: $5 trillion in current dollars. 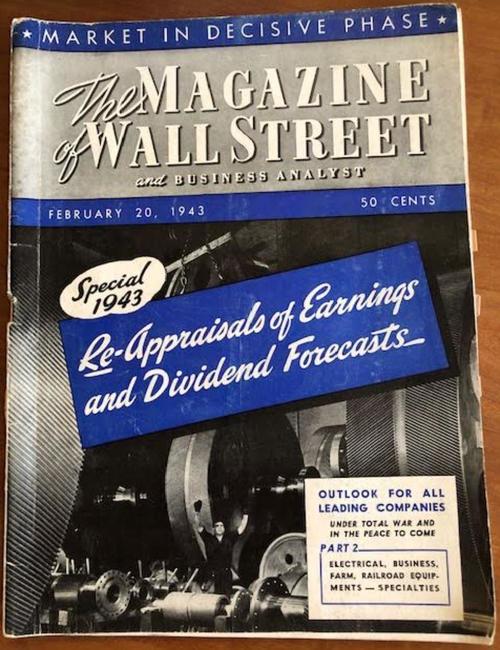 For this week’s Story Time Thursday, here are some comparisons to consider:

#1: First, the obligatory Tolstoy-esque “every bull market is the same” idea from the lead paragraph of an article titled “Market in a Decisive Phase”:

“There is an old saying that nothing succeeds like success. At times, that is true of the stock market. Good news from the war fronts is very helpful, but that is not the main thing that is attracting bulls to the market. At last many people – who had no notion of buying when values were considerably more attractive than now – are convinced that ‘there’s gold in them thar hills’. What has convinced them? Answer: Rising prices and big volume. It seems that to make money, all you have to do is buy almost any low priced stock. Word of this is evidently getting around.”

And from later in the article:

And this “seemingly torn from today’s (2021) headlines” snippet:

“Undoubtedly the demand for ‘cats and dogs’ is coming in increasing degree from lower-income people who have not before been interested in the stock market.”

And the article’s closing shot:

“Scrambles to get on board never endure; and, while they provide hay for nimble traders, they represent the worst time, rather than the best time, for buying by longer-pull investors.”

Also worth noting: the SEC conducted some studies about the market’s retail investor-driven frothiness in early 1943, but decided to leave things be.

Takeaway: over the rest of 1943 (i.e., after this article’s publication) US equities rallied another +18 percent and went on to post a +19 percent advance in 1944 and were up +36 percent in 1945. No need to dwell on the similarities expressed in this piece to today’s market narrative… The author missed what effect massive fiscal spending would have on consumer spending (despite rationing), corporate profits (despite high taxes) and the effect a fully employed workforce would have on interest in investing (with not much else to spend money on).

#2: Inflation was an issue during World War II because of supply shortages, but as an article titled “Wisest Investment Policy in This Period of Inflation” explained:

“It should be noted that the majority of economists, both here and in England, agree that the greatest potentiality of a radical inflation will confront us in the early peacetime years.

The reasoning is that in the transition to peace the purchasing power of consumers will be at a high level, the supply of civilian goods will be inadequate for a considerable time, the various psychological inhibitions of war-time will have vanished, rationing will be relaxed or ended under political pressure, the total consumer ‘inventory’ of clothing and a great variety of durable goods will be badly depleted or worn down, (so) there will be a scramble to buy and prices will rise.”

Takeaway: inflation was, in fact, much higher after World War II than during the conflict itself. The Consumer Price Index went from 2-3 percent annual increases to 20 percent in 1947. As for analogies to today, the setup is very different from the one described above. Yes, there is likely to be strong growth in consumer spending over the balance of the year. But no, we have no meaningful supply shortages in places (and they are places, not “things”) where they are most likely to spend.

#3: Even in February 1943, with +2 more years to go in World War II, investors were already thinking about which companies were “war plays” and which would do better under an eventual peace. The descriptions used then are very similar to 2020’s “pandemic plays” like businesses that enable work-from-home and “reopening trades” like travel and leisure. The Magazine of Wall Street even gave companies a “War Rating” and a “Peace Rating”, ranging from A (High Grade) to D (Marginal).

While there’s not a single A rating for either environment in the edition I have, there were several companies rated “B” for both war and peacetime investment potential:

Takeaway: frankly, the 1943 version of this construct strikes me as far more useful than the one markets have used over the last year. There are not “reopening stocks” or “pandemic stocks”. There are stocks of companies with talented managements and strong competitive advantages, and then there’s the rest. It’s hard not to see Big Tech as the GEs, Deere’s and IBM’s of the current age, even with their regulatory overhangs.

Final thought: for me, reading the 1943 market commentary was a stark reminder of “don’t overthink things if you want to make decent returns”. Everything about why US stocks would compound at 27 percent annually over the next 2 years after 1943 was perfectly visible in the basic narrative of heavy government spending and the relative certainty of an Allied victory in World War II. That feels exactly analogous to today, and if one is a fan of “history repeats” this may be the most sensible reason to stay long risk assets out there. Yes, the World War II US equity rally ran out of steam in 1946 (down 8 percent). Are we really in a post-pandemic period now? It doesn’t really feel that way, and today’s new highs say as much