Skip to content
Deep Politics
December 30, 2020
Lockdowns are politically motivated and have nothing to do with science. They are causing a silent genocide across the globe while enabling the greatest transfer of wealth in the history of the world.

This is a must read, must think about article by one who fully understands Technocracy and Scientific Dictatorship. Technocracy’s coup de etat is in full swing yet general awareness still seems far away. Meanwhile, all sectors of society are being crushed and more people are dying as a result. ⁃ TN Editor

As one would expect, shutting down businesses for extended periods of time leads to businesses going under for impaired cash flow from lack of revenue. Back in August 2020, Bloomberg reported3 that more than half of all small business owners feared their businesses wouldn’t survive. They were right.

“That ’leaders’ across the world transformed into tyrants, believing they had a right to bankrupt their subjects, is the core evil of lockdown.”

The Greatest Wealth Transfer in History

How does shutting small businesses but allowing big box stores to stay open protect public health? There’s really no rhyme or reason for such a decision, other than to shift wealth away from small, private business owners to multinational corporations.

While working-class Americans have been forced to file for unemployment by the tens of millions, the top five richest people in the U.S. increased their wealth by 26% between March 18 and June 17, 2020.7 Since the beginning of the pandemic, the collective wealth of 651 billionaires in the U.S. rose by more than 36% ($1 trillion).8 The assets of these 651 billionaires is now nearly double that of the combined wealth of the least wealthy 165 million Americans.

As noted by Frank Clemente, executive director of Americans for Tax Fairness, “Never before has America seen such an accumulation of wealth in so few hands.”9

Far from being the great equalizer, COVID-19 is the greatest wealth transfer scheme in the history of the world. Indeed, you may as well call it what it is: grand-scale asset theft from the poor and middle class. A December 14, 2020, article10 in The Defender reviews who has benefited from pandemic measures the most, from the finance and tech industries to the pharmaceutical and military-intelligence sectors.

According to an August 10, 2020, article11 by Forbes, pandemic measures had eliminated nearly half of all Black-owned small businesses in the U.S. by the end of April 2020. It cites data from a New York Fed report,12 which found that “Black-owned businesses were more than twice as likely to shutter as their white counterparts.”

While nationally representative data on small businesses showed active business ownership dropped 22% between February and April 2020, the number of businesses owned by Blacks dropped by 41%. The decline in Latin-owned businesses was 32%; Asian-owned 26%; and White-owned 17%. According to Forbes:13

“At the same time, Black-owned firms, already smarting from a Great Recession that hurt them badly, already entered the crisis with ‘weaker cash positions, weaker bank relationships, and preexisting funding gaps.’ ‘Even the healthiest Black firms were financially disadvantaged at the onset of COVID-19,’ said the report.”

Mere weeks into the pandemic, Americans were lining up at food banks. An April 12, 2020, article14 in The New York Times showed miles-long lines in Pittsburgh, Pennsylvania, Miami, Florida and elsewhere:

“In many cities, lines outside food pantries have become glaring symbols of financial precarity, showing how quickly the pandemic has devastated working people’s finances.

In San Antonio, 10,000 families began arriving before dawn on Thursday at a now-shuttered swap meet hall to receive boxes of food. Normally, 200 to 400 families might show up during a normal food distribution.

‘It’s a wave of need,’ said Eric Cooper, president of the San Antonio Food Bank. ‘They were all let go. There’s no savings. There’s no slack in their household budget. The money’s run out. It just shows how desperate people are.’”

The situation is much the same in other countries. An April 10, 2020, report15 by the Financial Times cited survey results showing an estimated 3 million Britons had gone without food at some point in the previous three weeks. An estimated 1 million people had by then already lost all sources of income.

Anna Taylor, executive director for the Food Foundation in the U.K., told the Financial Times there’s a “food poverty problem that has not been dealt with” that is now becoming glaringly apparent — and that was mere weeks into the pandemic. We’re now nine months down the line, and governments around the world are again calling for lockdowns over the winter holidays.

That forcing people into poverty will have a detrimental effect on their mental health is also not surprising. A Canadian survey16 in early October 2020 found 22% of Canadians experienced high anxiety levels — four times higher than the prepandemic rate — and 13% reported severe depression.

In the U.S., an August 2020 survey17,18 by the American Psychological Association found Gen-Z’ers are among the hardest hit in this regard, with young adults aged 18 to 23 reporting the highest levels of stress and depression.

More than 7 out of 10 in this age group reported symptoms of depression in the two weeks before the survey. Among teens aged 13 to 17, 51% said the pandemic makes it impossible to plan for the future. Sixty-seven percent of college-aged respondents echoed this concern.

With despair comes drug-related problems, and according to the American Medical Association, the drug overdose epidemic has significantly worsened and become more complicated this year. “More than 40 states have reported increases in opioid-related mortality as well as ongoing concerns for those with a mental illness or substance use disorder,” the AMA reported in an Issue Brief19 updated December 9, 2020.

A list of national news included in the AMA’s brief20 include reports of increases in overdose-related cardiac arrests, surges in street fentanyl leading to deaths in the thousands and a “dramatic increase” in illicit opioid fatalities. Spikes and record numbers of overdose deaths have been reported in Alabama, Arizona, Arkansas, California, Colorado, Delaware, District of Columbia, Illinois, Florida and many other states.

That pandemic measures are doing more harm than good can also be seen in Centers for Disease Control and Prevention data21,22 showing that, compared to previous years, excess deaths among 25- to 44-year-olds has increased by a remarkable 26.5%, even though this age group accounts for fewer than 3% of COVID-19-related deaths. 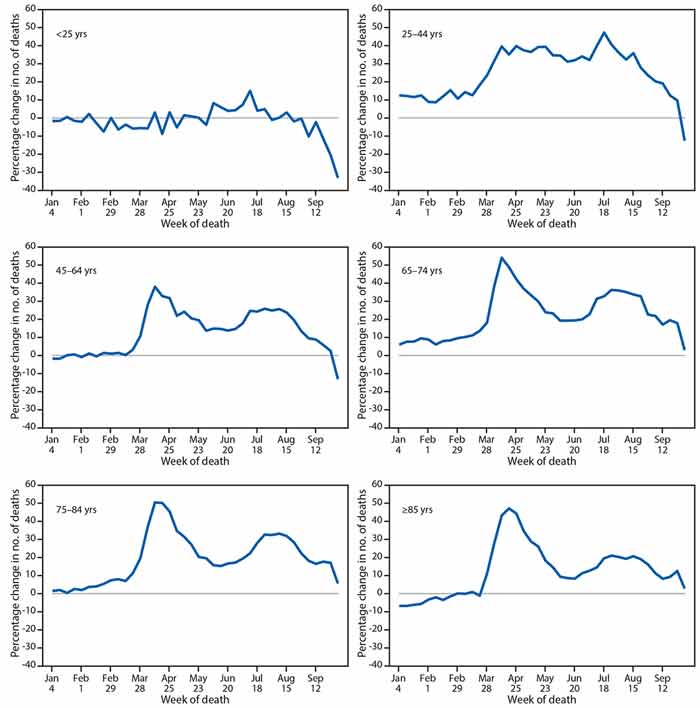 To put it bluntly, in our misguided efforts to prevent the elderly and immune compromised from dying from COVID-19, we’re sacrificing people who are in the prime of their lives. As noted by Senger:23

“Per CDC, despite mass PCR testing and disproportionate false positives, at least 100,947 excess deaths in 2020 were not even linked to COVID-19 AT ALL. In other words, over 100,000 Americans were murdered this year by their OWN GOVERNMENT.”

Child abuse, meanwhile, is less likely to be detected and reported thanks to virtual schooling. As noted by Human Rights Watch:31

“More than 1.5 billion students are out of school. Widespread job and income loss and economic insecurity among families are likely to increase rates of child labor, sexual exploitation, teenage pregnancy, and child marriage.

Stresses on families, particularly those living under quarantines and lockdowns, are increasing the incidence of domestic violence … ‘The risks posed by the COVID-19 crisis to children are enormous,’ said Jo Becker, children’s rights advocacy director at Human Rights Watch …

Child abuse is less likely to be detected during the COVID-19 crisis, as child protection agencies have reduced monitoring to avoid spreading the virus, and teachers are less able to detect signs of ill treatment with schools closed.”

There are signs of rising child abuse though, including a British study32 that found a shocking 1,493% rise in the incidence of abusive head trauma among children during the first month of the lockdown, compared to the same time period in the previous three years.

Children are also in danger of falling behind socially and developmentally, even if they’re not exposed to direct abuse. In November 2020, The Guardian reported that many children are regressing mentally and physically as a result of the lockdowns.33

The Washington Post reported34 scholastic achievement gaps have widened in the U.S. and early literacy among kindergarteners has seen a sharp decline this year.

According to The Economist,35 American children over the age of 10 cut physical activity by half during the lockdown, spending most of their time playing video games and eating junk food. Indeed, closing parks and beaches right along with small businesses and schools was undoubtedly among the most ignorant and destructive pandemic measures of all.

US Embassy Caught Scrubbing Tweets Urging Venezuelans Not To Vote