Authored by GQ Pan via The Epoch Times,

The Los Angeles Unified School District (LAUSD) Board of Education on Tuesday approved a plan to cut one-third of its police budget and divert the money to a program that focuses on black students achievement. 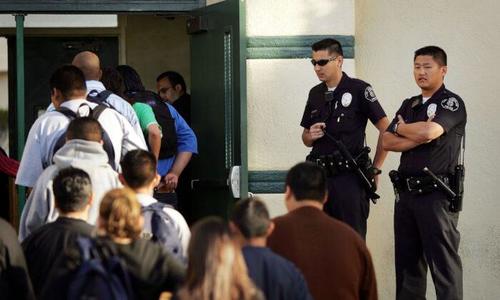 The board voted to cut 133 school police positions from the Los Angeles School Police Department, including 70 sworn officers, 62 non-sworn officers, and one support staff member. The staff reductions reduce the annual budget of the district’s police force from $77.5 million to $52.5 million.

Police officers stationed at all secondary schools will be replaced by new “climate coaches,” who are trained to, according to the plan, implement “positive school culture and climate,” use “de-escalation strategies” to resolve conflict, understand and address “implicit bias,” and eliminate “racial disproportionately” in school discipline practices.

The new plan doesn’t allow individual schools to apply to keep police officers on their campuses. Instead, officers will remain on call to respond to emergencies, with a goal of a three-to-five minute response time.

The police force reduction is part of the LAUSD’s $36.5 million Black Student Achievement Plan, which aims to provide supplemental services and support to 53 schools that have a large black student population and “high need indicators,” such as lower than average math and English language arts proficiency rates, higher than average referral and suspension rates, and higher than average chronic absenteeism.

In addition to the police overhaul, the plan would dedicate $30.1 million for improving “school climate” and reducing “over-identification of black students” in suspensions and discipline actions, $4.4 million to implement academic changes such as adding more black authors into school curricula, and $2 million for community partnership with organizations that serve black youth.

“We’ve been systematically failing black children as a country. Schools must be part of the solution, because a great education is the most important part of the path out of poverty,” Superintendent Austin Beutner said on Monday during his weekly update to the LAUSD community.

“While we at L.A. Unified don’t have all the answers, we’re committed to making change.”

The changes mark the latest move by the nation’s major public school districts in response to the “defund the police” movement. In the wake of death of George Floyd in custody of Minneapolis police, activist and organizations such as Black Lives Matter have called on local and officials to “defund” their law enforcement forces, arguing that redirecting funding from police toward other social service programs could make communities safer.

Last summer, the Minneapolis Public Schools board of education voted unanimously to terminate its contract with the Minneapolis Police Department, saying it “cannot continue to be in partnership with an organization that has the culture of violence and racism.”