One of the unexpected silver linings resulting from the covid crisis frequently brought up by economists, is the record surge in household savings as a result of the trillions of fiscal stimulus injected in the economy earlier this year: this cash buffer, conventional thinking goes, provides Americans with a safety net should the US economy double dip, or if covid shutdowns persist into 2021, hammering small businesses. And while said buffer has shrunk substantially in recent months, with the average personal savings rate dropping to 13.6% from a record 33.7% in April, it still remains more than double recent levels. 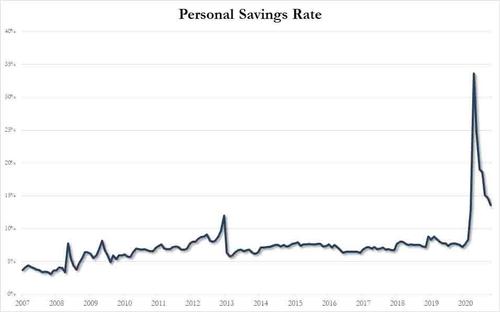 Unfortunately, as is the case with record US household net worth – where as we showed last week the bulk of assets is held by the top 1% while the bottom 90% are left the liabilities – the average savings rate doesn’t tell the full story, and according to a new study low-income households are burning through their cash far more quickly than higher-income families and could be out of savings soon if more aid is not delivered.

The report, released Wednesday by the JPMorgan Chase Institute, found that the median household checking account balance surged by 65% after the arrival of stimulus checks in April, formally known as Economic Impact Payments, but balances have steadily declined since May, and by the end of October the median low-income family spent 64% of the extra cash they accumulated this year compared with last year, leaving them with about $236 in extra cash. In contrast, higher-income households lost just 38% of the cash cushion built up this year, and had a median $810 in savings. 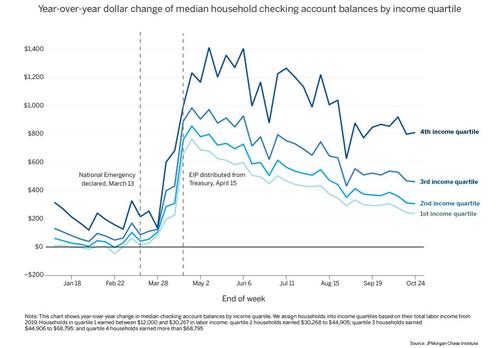 “If these trends continue, we would expect low-income families to deplete their account balance gains sooner than their high-earning counterparts,” researchers noted in the report, which reflects the Chase checking account balances of 1.8 million families through October.

This variation between the financial state of the rich and poor was once again best captured by a simple statistical divergence – that between mean and median data: the study showed that cash balances appeared steady on average after rising earlier this year, in line with a separate report released by the Federal Reserve last week showing that balances in cash, checking accounts and savings deposits rose over the three months ending in September to a record $13.4 trillion.

But a look at cash balances for the median household – which is not affected as much by households with abnormally high, or unusually low, account balances – showed a more volatile experience. The median cash balance for checking account holders studied by JPMorgan Chase rose in the spring when the government distributed cash payments to most households – and balances have been declining since. 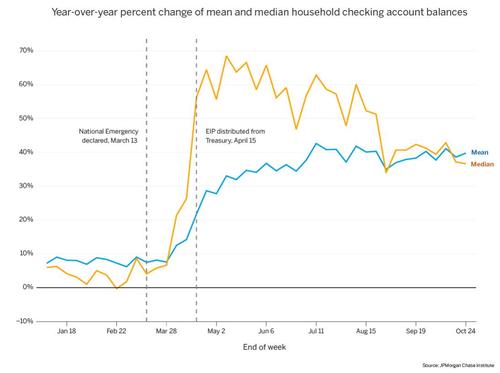 Those lower income households could experience another substantial drop in income and spending at the end of the year when unemployment benefits are set to expire for millions of workers participating in pandemic programs created by the CARES Act, the researchers said, echoing our earlier analysis which found that 14 million people will lose their unemployment benefits starting Jan 1 unless existing stimulus packages are extended.

The estimate by the JPMorgan Chase Institute, part of the biggest U.S. bank, was slightly lower, and predicted that 9.4 million people are on track to lose their unemployment benefits at the end of the month without congressional action. The vast majority of those people are receiving Pandemic Unemployment Assistance, a program that offers jobless benefits to those not traditionally eligible like gig workers. And when families’ jobless benefits run out, their spending is expected to “drop sharply,” and they may fall behind on their mortgage payments, according to the institute.

Consumers previously cut spending on non-durable goods by 12% after losing unemployment benefits, and those receiving jobless benefits reduced spending by 14% over the summer after a $600 weekly supplement to unemployment benefits expired at the end of July, the study noted. The latest retail sales data confirmed the slowdown in spending, with the November print coming in well below expectations, at -1.1%, a big miss to the -0.3% consensus. 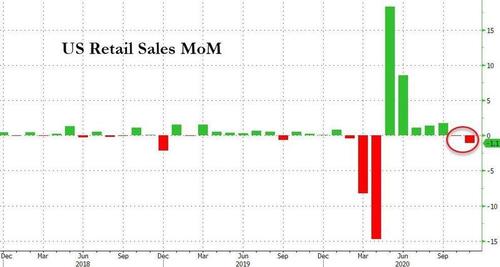 Lawmakers have yet to reach an agreement on another round of aid. Some COVID-19 relief measures could be attached to a critical spending measure that must be passed by Friday to avoid a federal government shutdown.