Sugarfina was an upscale candy retailer (whatever that means) that wound up filing for Chapter 11 bankruptcy back in 2019.

As a result, the company closed 44 of its boutique stores, according to TotalRetail. At the time it went bankrupt it had $26.65 million in debt and it disclosed that “from 2016 through 2018, the company experienced profitability in its wholesale, corporate and e-commerce channels; however, retail and international channels remained unprofitable.”

The company’s financial failures were blamed on expanding too quickly. “The downfall of a once fast-growing brand such as Sugarfina is somewhat surprising, although its rapid expansion of physical storefronts and international efforts proved the brand bit off more than it could chew,” Kristina Stidham at TotalRetail wrote in 2019.

Now, the company is trying once again to get itself off the ground using a different approach: crowdfunding. The retailer is trying to raise up to $25 million at a $125 million valuation by selling $10 shares of itself with a $500 minimum investment on crowdfunding site Start Engine. 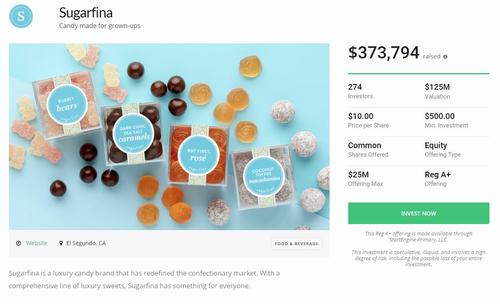 Among the “reasons to invest” at a $125 million valuation on the site is a bullet point that acknowledges the company has only done $18 million in revenue since November 2019. Oh, the “value” of investing in a candy company that has already once gone bankrupt at nearly 6x sales.

In continuing to try and pitch itself, the company writes: “We offer artisan confections for the fashion-forward female. Each of our price points delivers on our promise of Attainable Luxury, Playfulness, and Innovation.”

And what would the offer to invest in a candy company be without touting its “intellectual property”. The site says: “We are a leader in the luxury candy and premium gummy space. Thanks to our IP portfolio, this position is largely defensible, and as we continue to build our brand through increased marketing and branding campaigns — including our iconic packaging — we believe our market share is likely to increase.”

We didn’t even know there was a “premium gummy space”.

And apparently, not everyone is amused by the company’s crowdfunding efforts, after having just recently gone bankrupt. The Profit’s Marcus Lemonis, who is an expert in turning around distressed businessess, weighed in asked “is this real?”.

Is this real? … company goes bankrupt and leaves many behind them crowd funds to raise 25 million dollars from private individuals after establishing a value of 125m …#confused @sugarfina https://t.co/zYxI03YU98…

“I Ain’t Going Anywhere”: Ted Cruz Fires Back At AOC After She Calls For His Resignation

COVID: where are the courageous religious leaders?