Major Nor’easter Could Bury NYC In Two Feet Of Snow

Tens of millions of people across the Northeast are waking up Monday to 2021’s first major snowstorm with up to two feet and whiteout conditions in certain areas. 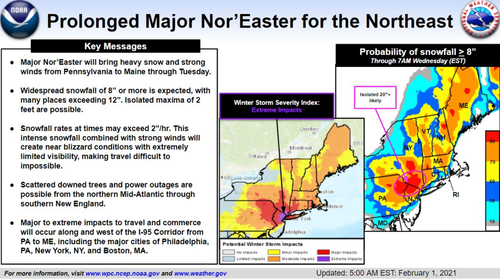 A major nor’easter is dumping heavy snow from Baltimore–Washington metropolitan area to Philadelphia to New York City to Boston through Tuesday. 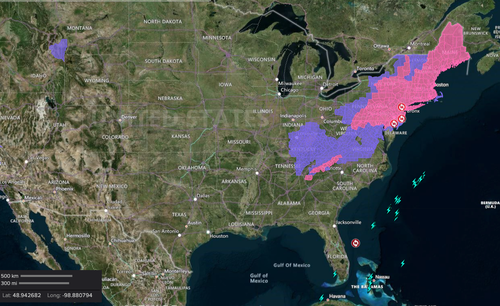 NBC News meteorologist Bill Karins said the Tri-State area could see the largest snowstorm in half a decade. Karins forecasts New York City could receive up to 20 inches of snow or more. 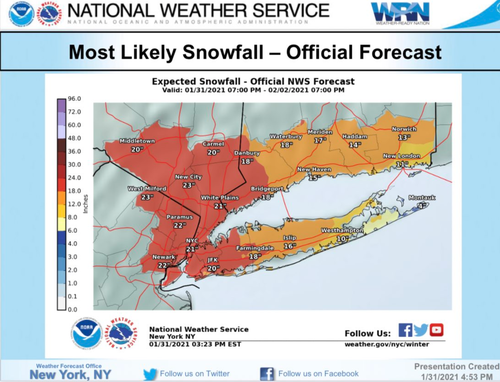 Karins said National Weather Service’s New York field office is forecasting 21 inches in Central Park. “To be clear, the new forecast for NYC of 21″ would equal the snow that fell in the Blizzard of 1888 and tie the 4th largest snowfall in NYC history!” he said.

On Sunday, New York Mayor Bill de Blasio said the city’s school system would be closed. He said appointments for coronavirus vaccinations would be put on hold and rescheduled.

“The last thing we want to do is urge our seniors to come out in the middle of a storm like this,” de Blasio said.

“Beginning 6 AM tomorrow, February 1, nonessential travel will be restricted in New York City. This winter storm will be dangerous with heavy snowfall and strong winds. If you can stay home, stay home. Keep the roads clear for emergency vehicles.”

BREAKING: beginning 6 AM tomorrow, February 1, nonessential travel will be restricted in New York City. This winter storm will be dangerous with heavy snowfall and strong winds. If you can stay home, stay home. Keep the roads clear for emergency vehicles. pic.twitter.com/S7xPoVLGlt

The 48-hour weather event could result in 1 to 2 inches per hour of snow and 40-50 mph wind gusts on Monday, indicating whiteout conditions are expected in certain areas. ABC7 meteorologist Jeff Smith said this system is a “rare snowstorm the likes of which we see every five to 10 years.”

Northeastern and central New Jersey, New York City, western Nassau County, the Hudson Valley, and Connecticut are all forecasted to receive 18 inches of snow or more. The strongest winds could be seen across Long Island.

EarthCam’s live shot of Times Square as of 0659 ET. 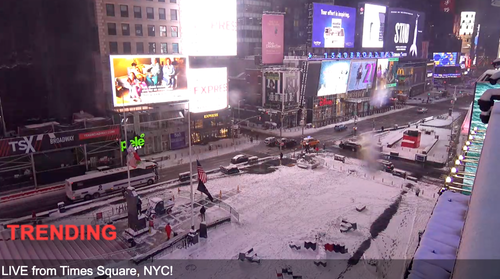 The good news, with tens of millions of people stuck inside because of the snowstorm – and the markets opening in a few hours – they’ll be able to daytrade the r/WallStreetBets most shorted stocks. The Reddit group is attempting to cause a major squeeze in silver this morning.