Two weeks after the catastrophic 7Y auction on February 25 sparked bond market turmoil, bond traders were on edge ahead of today’s 3Y auction, even though we explained yesterday why they can relax as the Biden stimulus paradoxically gave banks more capacity to absorb paper and it was very much unlikely the 7Y disaster would repeat itself.

Well, at least when it comes to today’s first of the week coupon auction when the Treasury sold $58BN in 3Y paper, that was indeed the case, with solid buyside demand meeting the supply and helping push yields lower across the curve as the bond market collectively exhaled.

To be sure, it wasn’t just roses, with the internals a little soft, as Indirects took down 47.8%, down from 52.7% in February and below the 51.2% six-auction average. This left Directs holdings 18.2%, the most since Dec 2019, and Dealers with 34.0% of the auction, both somewhat weak prints but nothing shocking. 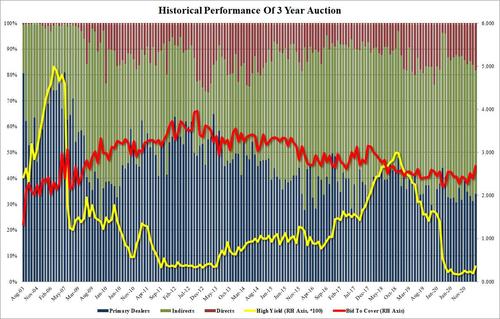 The market – fearing the worst – was clearly relieved, and yields dipped in kneejerk reaction to the solid auction. 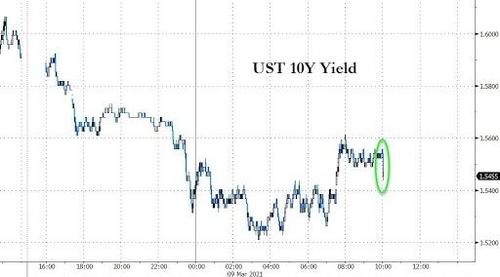 Yet before bonds (and stocks) pop the champagne, the real test will come tomorrow, when just hours after what is likely to be an overheating CPI print, we get a $38BN 10Y reopening. That’s the one that matters, and anything less than perfection at 1:01pm tomorrow could mean another mini tantrum.

Small Businesses Freaking Out About Surging Taxes Under Biden