Market Surges Back To Overbought As Investors Go “All In”

It seems like it was just last week that we were talking about adding exposure to portfolios. To wit:

“I suspect we may have some additional quarter-end rebalancing risk early next week. However, buying on Thursday next week, as second-quarter positioning gets underway, would not be surprising. As such, hold positions early next week and look for weaknesses to add to exposures as needed.

Such turned out to be the case as the markets slopped around early in the week. That changed as markets exploded to new highs on Wednesday and Thursday as portfolio managers charged back into the stocks sold off during the Archegos debacle.

With this understanding, you can appreciate why we increased our equity exposure last week. Currently, we are at full equity allocations, with a slight increase in the duration of bonds. Such leaves our portfolios at model weights in cash with bond durations shorter than our benchmark.”

While the rally was strong with the breakout to new highs, it also sent our “money flow buy signal” back to levels that previously coincided with market congestion (blue shaded area) 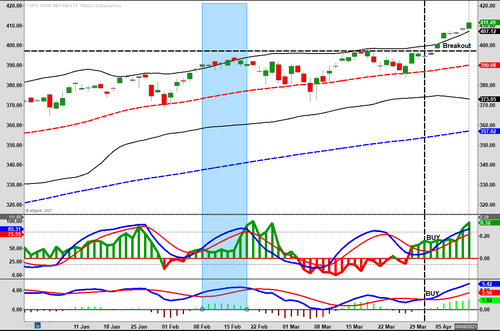 Importantly, the market is trading well into 3-standard deviations above the 50-dma, and is overbought by just about every measure. Such suggests a short-term “cooling-off” period is likely. With the weekly “buy signals” intact, the markets should hold above key support levels during the next consolidation phase. 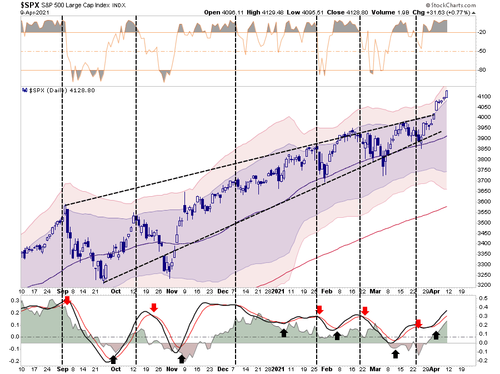 However, risks are building that has preceded more significant market declines in the past (5-10%.) As I noted in this week’s “3-Minutes” video, we suspect the timing of that correction will be mid-summer. Such a correction could indeed occur sooner, particularly if hopes for further Government spending fade, tax rates increase, or inflation surges more than expected.

Regardless, investors are more exuberant about markets than we have seen since the “Dot.com” craze.

Investors Are All In

There are two critical aspects to markets currently which keep us concerned near term. During “bear markets,” valuations are reversed from extremes as prices decline. However, “market corrections” do not reverse valuations as multiple expansions continue.

That was the case following the “economic shutdown.” Due to the Federal Reserve’s extreme interventions, prices quickly reversed from long-term bullish trend lines, and valuations were never reset from extremes. As such, all valuation metrics remain near or at historical extremes. A case in point is the historical “price to sales” ratio. 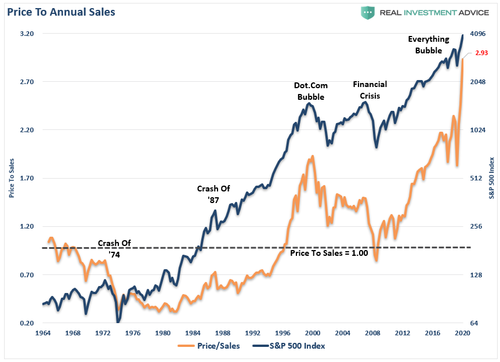 Furthermore, during “bear markets,” investors generally exit markets only to return several years later. Given one of the worst economic recessions since the “Great Depression,” individuals still carry higher levels of equity allocations than at the “Dot.com” peak. Talk about F.O.M.O. (Fear Of Missing Out.) 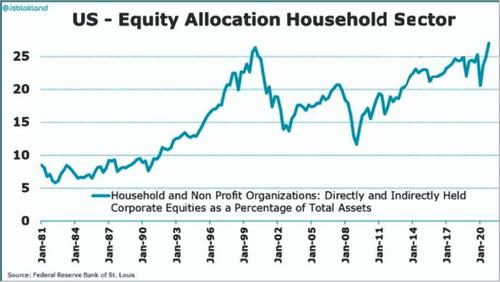 More importantly, over the past 5-MONTHS, more money has poured into the equity markets than in the last 12-YEARS combined.

As Bob Farrell once quipped:

“Individuals buy the most at the top, and the least at the bottom.”

Combine that market exuberance with more extreme overbought conditions, and the ingredients for a near-term correction are in place. 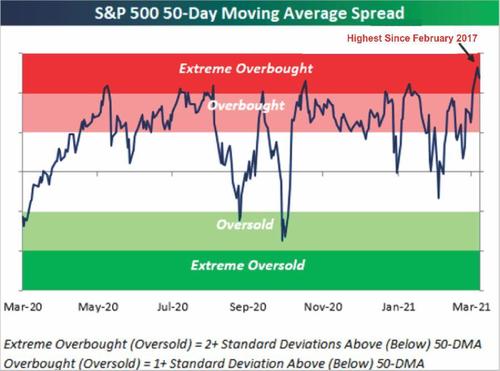 Given that everyone expects an “economic boom” over the next several months, there is a lot of room for disappointment.

So, what could disappoint market participants? Earnings growth is weaker than expected. Or, more importantly, downward revisions to earnings expectations in the months ahead. Neither would be surprising given that economists and analysts always overestimate outcomes.

Next week, I am publishing a more detailed report on earnings versus expectations. The critical point is that investors are currently paying record prices for year-end earnings that are significantly lower than initially estimated. As noted, given the analysts’ history of overestimating future earnings, it is likely next year’s earnings will be revised down rather markedly. 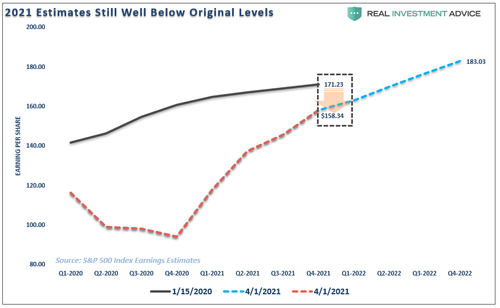 “Part of the runup in stock prices over the past year is due to the rebound in earnings we will see over the next few quarters. However, now that interest rates, oil prices and the dollar index have each been rising for some time, earnings growth will almost certainly peak and rollover next year, falling back into negative territory. As the stock market discounts fundamentals roughly 18 months into the future, according to Stan Druckenmiller, this bearish reversal in fundamentals could begin to affect stock prices relatively soon.” 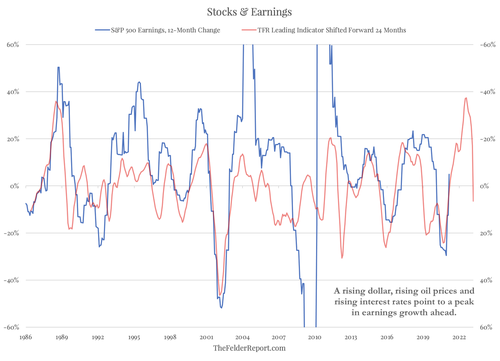 As we have discussed previously, rising rates have historically been a trigger for poor outcomes in markets. Jesse touches on our concerns as well.

“Finally, as Mehul Daya has demonstrated, history shows that rising interest rates regularly act as a bearish catalyst for both markets and the economy. To the extent that low-interest rates and easy money have encouraged and incentivized the unprecedented amount of leverage supporting risk assets today, the reversal in rates, which is already more dramatic than anything we have seen in decades, threatens to reveal just how fragile markets and the economy have now become.” 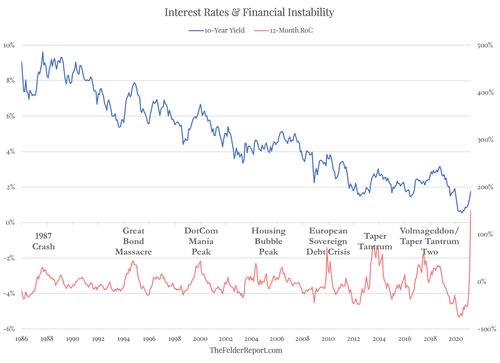 As I have discussed in the past, in a heavily indebted economy, changes in rates have an almost immediate negative impact on consumption which is 70% of the GDP calculation. As stated, while there are incredibly optimistic expectations of booming economic growth, to support current valuations, higher rates and inflationary pressures will undermine that outlook.

With markets trading at extreme deviations from long-term means, the risk of disappointment remains elevated. Such is why we suggest managing for “risk” rather than “returns.”

Always More Than One Cockroach

Such brings me to an interesting point by Doug Kass on Thursday.

“The market’s momentum has accelerated recently. That said, in yesterday’s, “There is Never Just One Cockroach,” I highlighted the market headwinds I see:”

You get the idea. The market remains very lopsided. Currently, with investors chasing momentum in a highly illiquid and leveraged market, there is a rather extreme risk of a price dislocation.

What would cause such an event?

No one knows. While markets quickly dismissed the recent collapse of Archegos Capital, so were the collapses of Bear Stearns hedge funds that warned of systemic problems leading to the financial crisis.

Maybe Archegos was an isolated event. Maybe not.

But as Doug warns, “there is never just one cockroach.”

As I concluded last week, there is only one fact to remember:

“All bull markets last until they are over.” – Jim Dines

Currently, we are maintaining our equity exposures with an ultrashort duration in bonds for the moment. With our “buy signals” returning to more extended levels, along with the overbought conditions of the market, it is likely we will need to start reducing risk as soon as next week.

Importantly, this does not mean “sell everything” and go to cash. We remain in the seasonally strong period of the year, psychology remains extremely bullish, and liquidity is still flooding markets. As such, we could well see the market consolidate within a range over the next few weeks.

As noted above, there are more significant concerns around mid-year. We will likely see peaks in both earnings and economic data as year-over-year comparisons become more challenging. Also, by that point, we will have a better understanding of potential tax increases, reductions in liquidity, and just how “sticky” the employment picture is.

With valuations elevated, prices well deviated from long-term means, and investor allocations very aggressive, there is no margin for error.

Over the next few weeks, there is little reason to “bearish.”

Looking out over the next 12-24 months, we find it increasingly challenging to be “bullish.”

Israel To Allow “Green Pass”-Holders Only To Access Public Spaces

Google Is Not What It Seems