Markets Rally… But What About COVID?

Markets look set to rally strongly into Q2, but are they over-exuberant? The rise in deaths and new strains in Brazil hints the Covid war isn’t won yet, there are rising political risks in Europe, and widening wealth inequality is apparent everywhere. Just how solid are our expectations of stability, renewed global travel and recovery if Covid is here for the long-term?

We are now properly into the second quarter and, cosmetically, what’s not to like? These godless ‘Muricans kept markets open over the religious weekend (lest we forget; all the Sons of Adam were celebrating), and markets are all higher. Sentiment is opening up strong. No one seems particularly worried about the risks of rising bond yields or inflation – for the moment. The market has moved on. Summer is coming so buying boots on!

Driving the market’s strength are a number of factors including Friday’s blow-out US employment numbers and service sector growth on Monday. Low interest rates into perpetuity looks to be nailed on. As a result, the Dow and S&P are both at record levels. The frothy mood has been fuelled with some very strong sales numbers from Tesla and a host of puff-articles suggesting Bitcoin is apparently the perfect hedge on everything.

Meanwhile, Biden’s $2.3 trillion infrastructure fiscal spending plans have been seen as positive; even as the programme runs into predictable speedbumps from Republicans fuming about higher corporate taxes, while the Democrat left says it’s not enough. Janet Yellen’s call for a global corporate tax rate will fall on deaf ears. That’s all normal noise… The end of the pandemic means everything will get better! I can’t wait for normalisation – and the pubs to reopen!

But, there are always spoilers.

Does the strength of the stock market, and tech in particular, just represent a new record playing to keep an already jaded party going, fuelled by the drug of irrationally low interest rates? Can the current exuberance continue? Even if we get unlimited vaccine upside; markets have been pricing in a strong recovery since March 2020 – how much more can they realistically gain?

What about downside risks?

How strong can the global economic recovery be if we see renewed and resurgent Covid third waves across STV (slow-to-vaccinate) nations? Could it be COVID could still upturn global expectations of recovery? What would that mean for global travel, hospitality and supply chains?

I’ve been something of a Covid sceptic through the pandemic – noting the very low absolute death rates and concerned at the trade-off/comprise between protecting health service capacities by lockdown vs the very real economic damage being done. We could argue for hours about what the long-term future costs will be on health and growth as a result of lockdowns with prove to be. What is apparent is the right policies for one country might not have been right for another – there is not a single easy answer as every society is different. 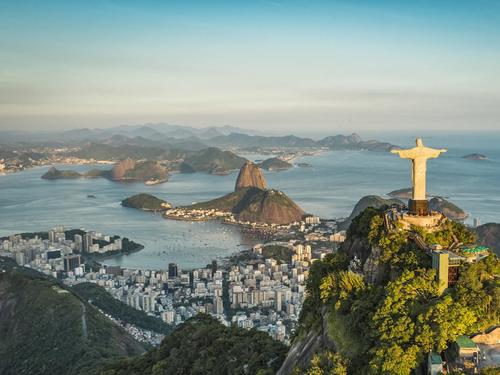 But, the news from Brazil is particularly worrying. After 300,000 deaths, and the sacking of the entire military leadership last week in what looked like a reverse-coup, President Bolsonaro “is more isolated than ever” according to the FT. Confidence in Brazil’s strong man government appears to be melting as Covid ravages the nation –  there are stories circulating that new Brazilian mutant strains have been able to evolve amid the confusion that are entirely resistant to the vaccines. If these are correct, it could strengthen some of the worst-case scenarios predicting decades of Covid impact on the global economy.

Something is clearly wrong in Brazil. It now accounts for nearly 1/3rd of global covid fatalities, with less than 3% of the global population. The health services are swamped – with 496 people dying while waiting for ICU care in San Paulo in March. The whole nation is short medicine and oxygen. While hospital death rates are falling with better treatment and therapies in the West, 80% of Brazilians on ventilation and 60% in ICU are dying. As states try to lockdown, the central government has pushed back.

If a reinvigorated pandemic is brewing in Brazil, then what might a Covid future hold? Our expectations of a fully reopen global economy could be very wide of reality. It might be time to hedge some of the recovery stocks based on the rapid reopening of global travel and tourism. Borders may remain closed longer than we expected.

Meanwhile the risk of political uncertainty is rising in Europe on the back of flailing vaccination programmes. The dropped trifle that was Angela Merkel’s careful succession planning has become a cataclysm of doubt as German political structures come under fire. The split between the Berlin government and Federal States looks stark – but shared responsibility isn’t working as each side blames the other for incompetence. The Germans will sort it – but by focusing the efforts and attention internally rather than on the wider European problem of uneven growth – which is bad news for the rest of the EU struggling to spark any real growth and vulnerable to a long-term tourism slowdown.

France is even more interesting – Marine le Pen vs Emmanuel Macron for the presidency next year? Could a sanitised Le Pen and a rebranded far right take the Elysee on the back of Macron’s stumbles and the French blaming Brussels for the failure of the vaccination rollout. Today, it looks a distinct possibility.

However, the biggest issue that may emerge from Covid isn’t the long-term health issues it raises, or the increased political risks, but what it does to the fundamental structure of society. I suspect the biggest change will be from the implications of just how much richer and secure the wealthy have become while the poor have become poorer and less secure. That will have major political consequences long-term.

Many years ago the bank I was working for made an major acquisition, buying a US housing lender active in the more challenging consumer lending sectors. Not quite sub-prime, but close to it. One of things our due-diligence research uncovered was when lower paid borrowers got into trouble, they stopped paying things like their car and then rent/mortgages pretty quickly – and the last thing they stopped paying was their cable sports TV channel.

Recent data from the car-lending sector shows almost 11% of US subprime borrowers are already more than 60 days late on car payments. They tend to be non-home owning, less well educated and more likely to have been furloughed or made redundant. The financial impact of the pandemic is being felt most strongly by the poor. The rising tide of protest across race and gender issues all boil down to inequality across society – and the pressure to address the root causes is rising.