With retail traders asserting their dominance over equity markets in a way the world hasn’t seen before (thanks to Wall Street Bets and its legions of rabid users hell-bent on punching hedge-fund shorts in the nose by taking GME to the moon), it’s worth looking back on an incident – which only unfolded few months ago – where Zero Hedge called out SoftBank for using an options-trading strategy that was partly responsible for driving huge gains in the Nasdaq (which, in turn, bolstered SoftBank’s bottom line) (and, in turn, bolstering both SoftBank and many of its top positions).

SoftBank ended up making billions via what we termed “the biggest gamma squeeze” in history. But now that a similar squeeze has made GME the markets story of the year, and retail traders are once again taking over the market, SoftBank has shared another piece of the puzzle in its annual report.

As the FT reports thanks to an incentive package that was approved a year ago (last February), four top SoftBank executives are sitting on a collective gain that could be as large as $1.2BN after they were each loaned hundreds of millions of dollars to buy the company’s (fast-rising) shares.

Since then, three of these men (including, most famously, Misra) have stepped down from SoftBank’s board, alleviating the company of the responsibility for disclosing these compensation schemes. As one “expert” pointed out, not only is it unusual (if perhaps not illegal) for a company to refuse to disclose these compensation packages, in Japan, hefty executive pay packages are frowned upon, which is one reason why SoftBank might not want to reveal them. 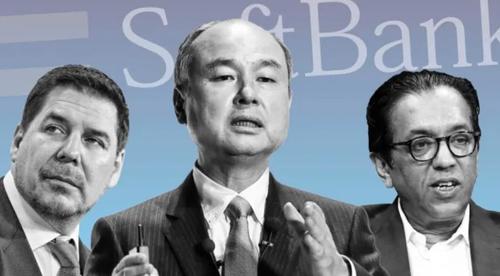 At any rate, the FT let the cat out of the bag. And now SoftBank (and its Chairman Masayoshi Son) has once again been caught with its hand in the cookie jar.

The three men’s departure from the SoftBank board may mean that SoftBank will no longer be required to disclose fully their compensation and borrowings from the company to buy shares. One person said SoftBank is discussing whether to keep the same disclosures levels to reassure investors.

“This kind of incentive scheme is extremely rare for Japanese companies,” said Katsuyuki Kubo, a corporate governance expert at Waseda University. “While there is no legal obligation, ideally from a governance perspective, incentives for top executives who are actively involved in running the company should be disclosed since the information is important for investors.” Mr Son has essentially backstopped his company’s potential losses on the loans to his lieutenants, with a footnote in the report explaining that the SoftBank founder had guaranteed any “shortfall” between the value of the collateral and the loan.

This isn’t the first time Son has used SoftBank shares to reward executives or founders.

The 63-year-old SoftBank chief executive has provided similar support in the past. In 2019, Mr Son personally guaranteed $2bn of loans taken out by the then 25-year-old founder of Oyo, an Indian hotel business backed by the Vision Fund.  One asset manager, whose fund holds a significant stake in SoftBank, said that investors were now probably used to the idea that Mr Son likes senior staff to be both leveraged and incentivised through large holdings of SoftBank stock.  “But what we are seeing now seems to be taking that to the extreme. It adds into the picture of a company that is basically one guy calling every single shot, and your choice whether to take whatever risks come with that,” said the investor.

But the great pains that Masayoshi Son took to disguise the loans suggest that something untoward might be afoot. 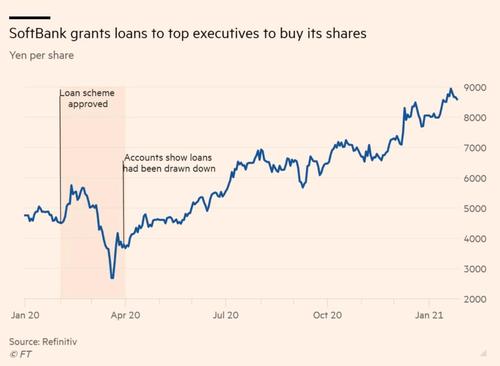 Two of these executives, Misra and Claure, already rank among the top paid executives in Japan earning $15MM and $19.6MM last year (sums that are unusually high in Japan.

Depending on when they exit the position, the men could be sitting on gains of anywhere between $300MM and $1.2BN. Now, some institutional investors are telling the FT that these loans have aroused their suspicions, and that they fear that the departure of Misra and two of the other four men from the SoftBank board late this past year might have been engineered to keep these loans in the dark.

While trying to keep top talent on board in the wake of the 2019 WeWork disaster, did Masayoshi Son create another mess while trying to clean up an earlier one?

Revolution, Revenge Of The Nerds, Or The Matrix Reloaded?