In the second COVID-19 superspreader event in less than one week, the first was Trump supporters attacking the Capitol complex last Wednesday, thousands of fans, many without face masks, poured out on the streets of Tuscaloosa, Alabama, to celebrate the Alabama Crimson Tide football win.

The Crimson Tide football team crushed the Ohio State Buckeyes on Monday evening to win the national college championship. As with any major win, at a large party school, college kids tend to party, and party they did on Monday night.

So it comes as no surprise that after the win, with the virus pandemic on no one’s mind, thousands of college kids densely packed streets in Tuscaloosa to celebrate the big win. Many of them were seen without facing coverings nor practicing safe social distancing.

Mayor Walt Maddox and UA urged fans to celebrate at home, but after a national championship in Tuscaloosa, they clearly had other plans pic.twitter.com/NpCHTFgM2Y 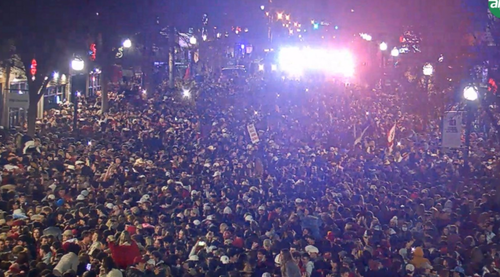 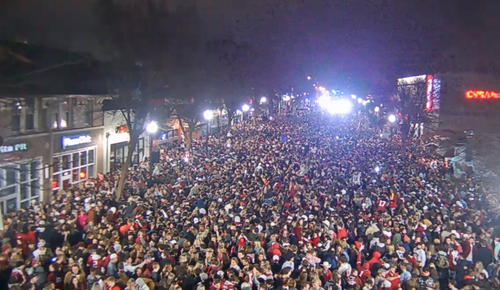 Ahead of the game, Tuscaloosa Mayor Walt Maddox told Alabama fans to respect social distancing rules and celebrate in a “responsible way.”

“There will be a time and place to celebrate, but this is not the time,” Maddox said. “All of us have friends, family members, people that we know and love who have been impacted by COVID-19. Presently, our hospital is stretched.”

In the upcoming days around the National Championship Game, we all have a role to play in keeping our community safe.

Please continue to follow @ALPublicHealth guidelines including wearing a mask and limiting gathering size as you cheer on the Tide. Thank you and Roll Tide! pic.twitter.com/OzXZDJMQEu

Since the pandemic began, 5,300 people have died in Alabama from coronavirus and more than 400,000 have tested positive. Tuscaloosa County has been a hard hit region with local hospital DCH Regional Medical Center seeing a surge in cases.

Instead of  “Roll Tide!” maybe it should be changed to “Roll COVID.”

Buchanan: The Worst Of Days For Trump & Trumpists

OUTRAGEOUS: The FBI Is Renting Billboards Around the Country To Pervert Reality and Promote Democrat Lies that President Trump and His Supporters Are Violent