“Now I’m sure there are plenty of folks over there who don’t like me too much and there are a few of you that I don’t care for too much but had anybody been hurt today, it would have been even more of a catastrophe than we already saw,” Gaetz said. “And I think that’s an important point for the country.” 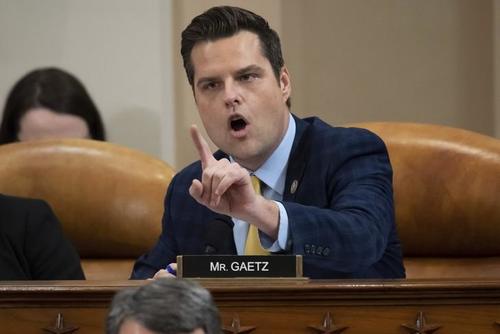 “Another important point for the country is that this morning, President Trump explicitly called for demonstrations and protests to be peaceful,” Gaetz continued.

“He was far more – you can moan and groan – but he was far more explicit about his calls for peace than some of the BLM and left-wing rioters were this summer when we saw violence sweep across this nation.”

Then he pointed out that Congress convened on Wednesday “to debate, to follow regular order, to offer an objection, to follow a process” that is specifically laid out in the Constitution.

“And for doing that, we got called a bunch of seditious traitors.”

“Not since 1985 has a Republican president been sworn in absent some Democrat effort to object to the electors but when we do it it’s ‘the new violation of all norms.’ And when those things are said people get angry.”

Gaetz also pointed out the Democrats’ hypocrisy following the storming of the Capitol by protestors.

“I’m sure glad that, at least for one day, I didn’t hear my Democrat colleagues calling to defund the police,” Gaetz said to a loud round of applause.

JUST IN: Rep. Matt Gaetz gives House floor speech that earns him boos and applause: “I’m sure glad that at least for one day, I didn’t hear my Democrat colleagues calling to defund the police!” pic.twitter.com/4V5vKeIKzv

Stoddard: If Polls Are Right, Dems Are Doomed; If They’re Wrong, It’s Worse

Media Pseudo-Debates and the Silence of Leftist Critics