Joe Scarborough just had this to say on Morning Joe:

Joe begins his rant by insinuating that those who’ve spent time documenting errors on the Russiagate story are maybe on “Russia’s payroll,” which is nothing new for this network, of course, or frankly for the press in general during this time.

Implying that anyone who didn’t buy into the moral panic on Russia was a traitor was a fairly constant theme in media and politics in the last four years, with NBC’s smear of Tulsi Gabbard as a “favorite” of “Russia’s propaganda machine” being one of the ethical low points of the era. Why should Joe Scarborough be above the same tactics?

I’m amused by so-called reporters who — I don’t know if they’re useful idiots for Russia, or if they’re on Russia’s payroll … but there are some gifted writers who spend all night and day, trying to dig through, looking for instances where the press screwed up on Russia stories. 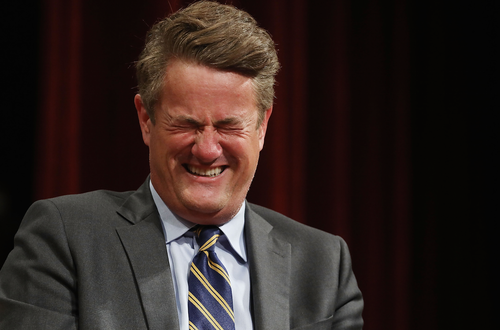 He went on to say that yes, there were instances of mistakes, and some bad mistakes, but “more often than not,” the press got it right. Perhaps this could be a new slogan for the network:

MSNBC. We get it right. More often than not.

Obviously, I won’t presume that he’s talking about me when he mentions “some gifted writers” who may or may not be foreign spies, criticizing networks like his. He could be referring to Aaron Mate, or Glenn Greenwald, perhaps even Erik Wemple of the Washington Post, whose critique of Scarborough’s colleague Rachel Maddow’s Russia coverage was scathing enough.

It doesn’t matter, as the universe of people actually doing such work isn’t large. I do have a recent piece out, “Master List Of Official Russia Claims That Proved To Be Bogus,” that sounds like the kind of thing annoying him, so I’m happy to respond on behalf of the group.

The humorous thing about this is that the group of writers who have spoken out on this topic is small enough that we all communicate with each other. We’ve been able to calculate that I was actually the last of the Russiagate skeptics invited on MSNBC, on January 13, 2017 — before Trump’s inauguration — when I joined Chris Hayes and Malcolm Nance to discuss what at the time was a red-hot story.

The irony is that one of the major criticisms of the media’s performance on this issue is that it has not allowed any critics of the story to appear really anywhere in the mainstream press, and particularly not on television, for nearly four years. I doubt they will break that on-air pattern even now. Still, it’s worth asking Scarborough: if you’re so certain this issue is a “joke,” surely you won’t mind discussing it?

If you’d rather not have me on, I’m sure someone on the more critical side would be happy to walk you through exactly how far short of “right, more often than not” your network has been in the last five years or so. Most of the major outlets were terrible on this story, but MSNBC’s particular brand of suckage was visible from space during the key years of Russiagate. Which I’m happy to lay out for you. Come on — no matter how it turns out, it’ll be great TV!

Supply-Chains Brace For Collapse: Port Of LA Fears Repeat Of “Shipping Nightmare” As China Locks Down