Authored by Annaliese Levy via SaraCarter.com (emphasis ours), 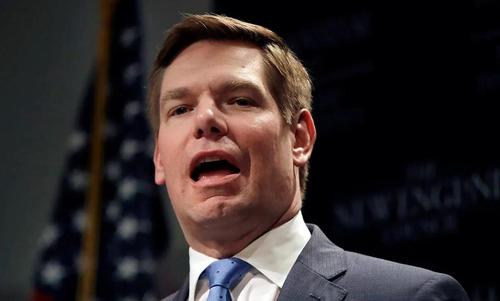 According to documents obtained by Fox News, Swalwell “has not denied public reporting that a suspected Chinese intelligence operative helped raise money for Representative Swalwell’s political campaigns” and “other troublesome elements of public reporting.”

The document is calling for Swalwell to be removed from his committee assignment “in light of conduct he has exhibited.”

#FoxNews has obtained this Resolution seeking Congressman Eric Swalwell’s removal from the House Intelligence Committee. TBD on timing in terms of when Leader McCarthy will seek to force a vote on the House Floor. pic.twitter.com/FpX7vd9Nz5

“Meet the New McCarthyism,” Swalwell tweeted in response to the resolution.

“Multiple sentences in resolution state “Swalwell has not denied…” Yet fails to include multiple FBI statements of “no wrongdoing” and did nothing but “cooperate.” All of this to deflect from @GOPLeader’s support for QAnon.”

Meet the New McCarthyism. Multiple sentences in resolution state “Swalwell has not denied…” Yet fails to include multiple FBI statements of “no wrongdoing” and did nothing but “cooperate.” All of this to deflect from @GOPLeader’s support for QAnon. https://t.co/2bsU72ev8H

McCarthy and other Republicans have been calling for Swalwell’s removal for months and argue that he is a national security threat due to his former ties with an alleged Chinese spy.

“Based upon the information I was given and the speaker was given by the FBI, there is no way he should be on that committee at all,” McCarthy told Punchbowl News.

Swalwell’s connection with Fang Fang, an alleged Chinese spy, was revealed in December by Axios. It was reported that Fang Fang helped raise money for Swalwell’s campaign and placed one or more interns in Swalwell’s office.

Despite the controversy, Swalwell was named one of the House impeachment managers for the second Senate trial of former President Donald Trump and was recently reappointed to the intel panel by House Speaker Nancy Pelosi.

Swalwell said his interactions with Fang Fang were “something that congressional leadership knew about it” and that he is no longer in contact with Fang Fang. Swalwell has yet to be accused of any wrongdoing by federal investigators.

Rabbi Aryeh Spero: “They Not Only Want to Cancel Trump, They Don’t Want Us to Come Back — Like a Reign of Terror During the French Revolution” (VIDEO)