Senate Minority Leader Mitch McConnell (R-KY) drew a line in the sand on Monday between the GOP establishment (the big club you ain’t in), and the populist QAnon movement – whose theories on elite pedophiles and a shadow government were deemed plausible by at least one-third of Americans in an October poll reported by Axios. 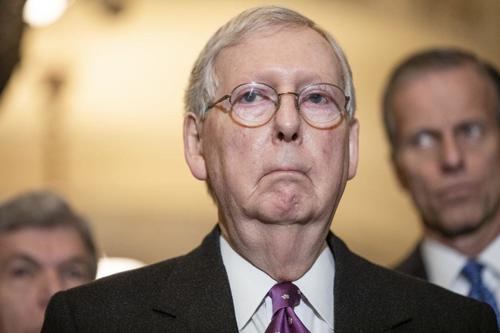 McConnell, who voted to go to war in Iraq based in part on a conspiracy theory and fabricated evidence misinformation from some guy, said on Monday – without actually saying her name – that freshman Georgia GOP Rep. Marjorie Taylor Greene’s embrace of “loony lies and conspiracy theories” is a “cancer for the Republican party.”

“Somebody who’s suggested that perhaps no airplane hit the Pentagon on 9/11, that horrifying school shootings were pre-staged, and that the Clintons crashed JFK Jr.’s airplane is not living in reality,” McConnell said in the “three-sentence statement” reported by The Hill. 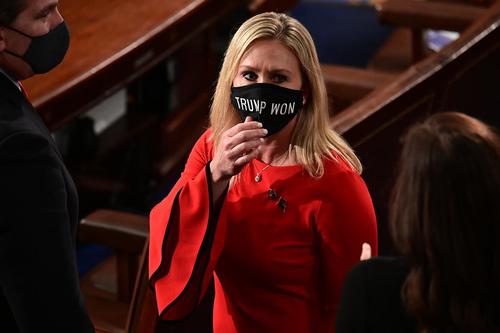 Greene has come under fire in recent weeks for her past support of QAnon – a political sin which Democrats such as Scott Dworkin – a veteran of both Obama campaigns and a Biden super PAC senior adviser – are using to call for Greene’s expulsion from Congress.

“Q is anonymous, but he seems to be completely for the good. He seems to be totally on Trump’s side … There’s a once in a lifetime opportunity to take this global cabal of Satan worshiping pedophiles out.” Marjorie Taylor Greene a few years ago. Expel immediately. Right. Now. pic.twitter.com/DMJAcfObZe

Meanwhile, Congressional Democrats are also ganging up to oust Greene from her Committees.

Democrats are threatening to force a floor vote this week to oust the controversial Georgia Republican from the Education and Labor Committee and the Budget Committee if House Minority Leader Kevin McCarthy (R-Calif.) does not remove her first.

McCarthy is set to meet with her in Washington as early as Tuesday. Some Republicans said they did not anticipate McCarthy booting her off the committees given that she has the backing of former President Trump, who still holds enormous sway within the GOP. –The Hill

Greene responded to McConnell’s comments in a Monday tweet, saying “The real cancer for the Republican Party is weak Republicans who only know how to lose gracefully,” adding “This is why we are losing our country.“

The real cancer for the Republican Party is weak Republicans who only know how to lose gracefully.

This is why we are losing our country.

For which a Democrat compared her physical appearance to Miss Piggy. (Do as we say…) 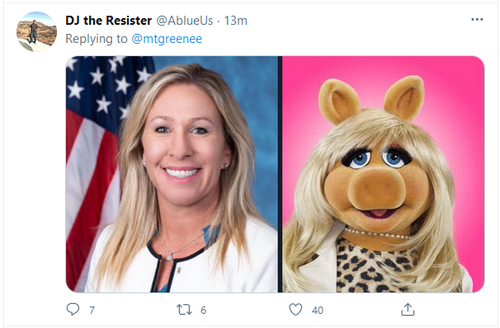 And while McConnell spent Monday bashing one Republican lawmaker, he also gave GOP Rep. Liz Cheney a boost, telling CNN in a statement that she had “the courage” to vote to impeach former President Trump last month.

“Liz Cheney is a leader with deep convictions and the courage to act on them,” he said, adding “She is an important leader in our party and in our nation. I am grateful for her service and look forward to continuing to work with her on the crucial issues facing our nation.”

Another GOP lawmaker anonymously told The Hill of Greene: “It remains to be seen how big of an issue she is long-term. She’s had a noisy entrance, but it’s unclear what she will be viewed as and whether she will even be known in the public psyche in November 2022. She’s had a tough transition to Congress. I’m not sure we need to go to the wall on this right now.”

The only Republicans I see attacking Congresswoman @mtgreenee are the same beta male fucking losers who lost with McCain and Mitt Romney and tried to lose with Jeb in 2016.

Greene said on Saturday that she had spoken with former President Trump, who is “100% loyal to the people and America first.” She added that she won’t back down or apologize, and will “always keep fighting for the people.”

… You can never beat him because We The People have his back.

The blood thirsty media and the socialists hate America Democrats are attacking me now just like they always attack President Trump.

I can promise you this…

America Last policies are policies for sell outs and losers!

In these divisive times, real leaders must be determined and strong to be able to withstand the rabid mob that preys on weakness in order to get their way, which is to destroy our country.

Forget The Losses: Here Are The Real Reasons Traders Are Spooked About The Archegos Implosion

A Face Mask Article You Will Want To Share